Do we have the courage to protect the innocents? 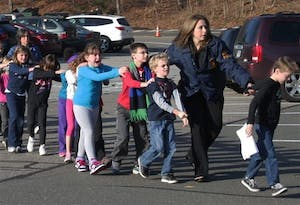 It’s hard to write this morning.

I was planning to wax eloquent about the Farm Bill legislation that is currently stuck in Congress and the “fiscal cliff” that we face as a nation on December 31. But those topics pale in comparison to the national tragedy in Connecticut.

We all know this story very well by now. Shooter armed to the teeth with semi-automatic weapons enters school/theater/church/classroom and destroys the lives of first graders/movie-goers/students/parishioners and then kills himself, while the nation first reels from the shock waves and then prays for the victims and their families, asks why it happened, experiences collective grief, and repeats – in unison – the phrase, “never again!”    And yet here we are in this same place “yet again.”

And because we are here yet again, my question for all of us today is: What will it take for our nation to finally address this evil of mass murders perpetrated using what can only be described as weapons of mass destruction?

Do we have the courage to stand up for the other six-year old children in our country who are still living? Are we willing to do whatever it takes to protect them from the next “yet again?”

It will mean hard choices about the rights that we cherish as a nation and the responsibility that we have to protect the innocents. Something must give. Returning to business as usual would only serve to reinforce the strongly-held sense that we have lost our moral compass as a people and that we are unable to make the right choices that lead to life instead of senseless death and destruction.   In our work in Food for the Hungry (FH), we see a lot of injustice in this world. Villages overrun and trampled by rebel armies that burn and pillage. Women raped and abused. Children living off scraps at the bottom of the food chain. What will it take to bring hope to the least of these?

It takes whatever it takes.

It takes the compassion of Jesus Christ made real every day. It takes moral fortitude and sacrifice. It takes people with an inner compass that is so fixed on the North Star that they do everything in their power to move heaven and earth for those who are vulnerable, dispossessed, and without a champion. Can we be those people today in the face of the Sandy Hook tragedy?  Can we rise up and be counted for that which is good and righteous? It will cost us something, I guarantee it.