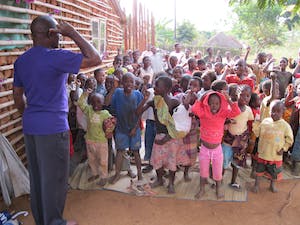 Meet Jason Wellnitz…my guest blogger. He’s written a novel inspired by a trip to Mozambique with Food for the Hungry. Read about his experience and what he did in response to what he saw.

Our driver turned the white minibus off the main paved road and down onto a red, rutted dirt path. We bounced and swayed as he navigated the bumpy network of paths, the way that lead somewhere apparent to him, but not to us.

As we slowed to a stop in front of a small house constructed of hand-formed, red clay bricks, the children burst into loud song. There are at least 80 small children next to the house, many of them holding their even smaller siblings on their hips.

This is Calvette’s Sunday school. Calvette is a key member of the FH/Mozambique staff, and I met him when I traveled there in June 2011.

The children sang us song after song, overjoyed at the opportunity. Eventually a drunk man wandered by, swearing at the children. They were undeterred, though later we found out, this wasn’t an uncommon occurrence.

Each Sunday, Calvette and his wife open their home to as many children that will come, giving them a good place to be away from the vices that haunt the communities.

Inspired by Calvette’s efforts, and those of the rest of the talented and dedicated FH/Mozambique staff, my wife and I donated a small amount of money to help Calvette complete an addition to his home that would shelter the Sunday school from both the elements and drunk people.

Wanting to do even more, I recently published a short novel called “River Way Home“. It’s inspired by my time in Mozambique, but it is pure fiction, not based on actual events or people.

I’m donating the proceeds from the first 500 sales of the novel to support FH’s efforts in Mozambique. Please see an excerpt below and if it looks interesting to you, please consider purchasing it from Amazon.com.

First, a small bit about myself. This much I’m sure you know but I must start at the start. I don’t know much about the woman who gave birth to me or the man who impregnated her. They are veiled from me. Hidden. Separated. They lived in Mozambique. Mozambique is a long country occupying twelve-hundred miles of coastline where southeast Africa meets the Indian Ocean. On a map it looks like the thick, crude, wooden slingshot of an African boy. It’s the ancient puzzle piece mate of the drifting island of Madagascar.

I was their first-born son and they were very young. They farmed some small sorghum fields and occasionally sold wooden goods at the market. The man who supplied my Y chromosome was deep in the throes of malaria at the time of my birth. He left his wife a four-lettered gift and she died near my first birthday. I have never seen her picture and my infant mind retained no memory of her. I passed through the hands of some extended family members who didn’t care to grasp me and landed eventually in a Christian mission orphanage near Beira, Mozambique. If Mozambique is shaped like a slingshot, Beira is the top of the handle, along the sea. I spent two years in the care of that brave, tenuous orphanage. My memories of that time are a thin patchwork. I was fed. I was kept out of the rains. There was a woman who was kind. But there were many of us and only one truly kind woman, so there were long gaps between her touches.

Now is the time to turn to the story of my real father. He is the one who came and found me in that orphanage.

Eventually you will understand the precise details of how my father ended up being born in Milwaukee. But suffice to say for the confines of this story, there was the brightest flash of light, an immense amount of time passed, and ambitious tribes made their way from Africa to Mesopotamia to Europe. They learned how to coax food from the Earth along the way. My father’s fathers were farmers in every generation except those immediately preceding his own.