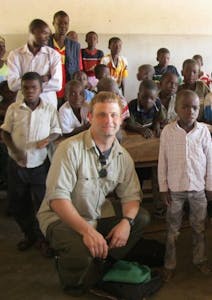 Here is part two of  series of three from my guest blogger, Jason Wellnitz, author of the book, “River Way Home.” His book was inspired by a trip to a Food for the Hungry community in Mozambique. In today’s blog, he talks about how his book was inspired from a profound question and also gives an excerpt from chapter 7.

Jason Wellnitz about his book:

As a young college student, my father faced the terrible task of burying his father. His father had a heart attack and all of the sudden, he was gone.

A few years later, my father had married my mother, and they had their first child: me.

In 2011, when I traveled to Mozambique on  a short-term mission trip to work with Food for the Hungry, I met a man named Halkeno, one of the leaders of the FH/Mozambique staff. He and I instantly connected. Over time, he told me his amazing life story, which also involved the loss of his father.

Someday, I hope Halkeno will let me write his true story. But until then,  inspired by both Halkeno and my own father’s stories, I wrote a short novel that explores the question:

“When we lose our fathers, do we ever find them again?”

In both my father and Halkeno’s case, the answer is a resounding: “Yes!”

They both responded to the trials in their lives by embracing a new Father, Jesus Christ. My life and the lives of many others, have benefited immensely by their decision to turn despair into hope through the love of Jesus.

My novel is called, “River Way Home,” and I’m donating the proceeds from the first 500 sales of the book to FH’s efforts in Mozambique. Please see an excerpt below, and if it looks interesting to you, please consider purchasing it from amazon.com.

“Oh,” began Brian coyly, “you two may be interested in something at church tomorrow morning.” After some friendly cajoling, they got it out of Brian. “I know the leader of an orphanage here in Beira well. Every Sunday morning, they bring their orphans to the church we’ll be attending tomorrow. There may be some… options for you.”

And that is how it happened, my friend. It was a cool, bright Sunday morning. We orphans walked, holding hands, in a line to church as we did every Sunday. I was sitting on a woven grass mat on the concrete floor in the back of the church with the other twenty-seven orphans when three white people walked in. The ladies choir, sitting in front of the church, each wrapped in colorful cloth, was singing. Occasional ululations rose above the song, a tambourine the sole accompaniment. White people attending this church, one of the larger Baptist churches in town, was not unheard of, though it was rare enough to bear noticing. The twenty-eight orphans ranged in age from four months to seven years. Two assistants, sitting with their legs bent underneath them, each held an infant and had another wrapped tightly against their backs. The kind woman, leader of the orphanage, swayed with the music and accepted various children into her lap as available.

I was three. I don’t remember it but my parents described it to me many times over the years. Sometime after the third song had finished and everybody sat down I simply stood up from my mat, walked over to Sarah and put my arms up. Hesitating for a moment, glancing over to the leader of the orphanage who smiled and gave a slight nod, she picked me up and brought me to a cradle, tightly pressed against her chest. At which point I promptly fell asleep for the remainder of the service. And just like that, on their first full day in Mozambique, we were a family of three.

After the service Brian, Harold, and the leader of the orphanage huddled together near the back of the church while Sarah remained seated in the same chair cradling and rocking me, humming quietly. Brian and the woman had worked together in the past and she trusted him. Based on his word alone she allowed them to take the child. Harold remarked inwardly that the lack of structure and laws here was both freeing and terrifying. It would not be the last time he had this thought. The group of three walked over to where Sarah and the child sat. Harold said quietly “he can come with us” and put his left hand gently on her shoulder and his right hand gently on my head. Sarah gave Brian and the orphanage leader a look of pure, deepest gratitude.