The only hope many have is the love of Jesus Christ 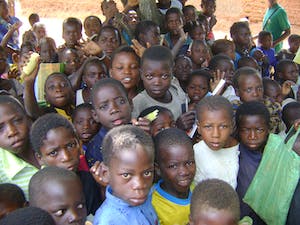 My guest blogger, Jason Wellnitz, is the author of the book, River Way Home, a fiction novel inspired by his time visiting a Food for the Hungry community in Mozambique. This is blog three out of a series of three blogs, Wellnitz talks about how his experiences on the field helped to inspire his book. I hope you enjoy his novel, it’s a heart-warming story.

Halkeno, Lori, DeeGene and I had traveled from Gorangosa to Kaia, Mozambique, to meet our sponsored children as part of a short-term mission trip with Food for the Hungry in 2011. Our translator, Palmayra, was trying to find DeeGene’s sponsored child. He wasn’t where he was supposed to be.

We went from the school to a mud-and-thatched roof hut. There was a long discussion between Palmayra and the couple who lived there.

After a bit, we headed down a trail on foot, with our hands brushing the tall grass. We arrived at a cluster of huts. No one was there.

“He’s not here,” Halkeno told us. “The child is an orphan and is living in his uncle’s home. The uncle took the child back to Gorangosa, we fear, because he is not treating the child well and doesn’t want us to see.”

We all prayed for the child asking God to protect him.

I think of that child and wonder what his hope in the world could possibly be? I always come back to the same answer: the only hope that child has is the love of Jesus Christ and the love of His followers.

Inspired by my time in Mozambique, I wrote a short novel call the River Way Home. I’m donating the proceeds from the first 500 sales of the novel to support FH’s efforts in Mozambique.

Below, you can read an excerpt. If you like it, please consider buying it from amazon.com

to help support FH’s work to reach children in need.

The adults eyes remained trained on the man. However, the children couldn’t help but steal glances at me. The man circled around the table toward me, his eyes intently trained on my face.

Harold stood to intercept him, and Sarah rushed to stand by my side. Harold’s hand on his chest, the man leaned forward and peered at me. I stared into his dark eyes, the liquor on his breath evident even at this distance. My chest tightened. We had only one mirror in our small house, over the bathroom sink. I recognized my chin line, my eyebrows, my cheekbones – images I usually only saw in that mirror – reflected in this man’s face. Was I seeing things or could this be the man whose sired me come back to life?

“Halkeno,” he breathed. After pausing he continued, “You are Halkeno… You are Halkeno. You are my only son. These people have a stolen you from me. Come with me now. Come with your father.”

At this, Brian stood up as well. Harold and Brian each grabbed an arm and forcefully guided the drunken man to the gate of the compound. They made a few attempts to convince the man he was mistaken, but he was agitated and talking rapidly in his native dialect, and they could no longer understand him, nor he they. They moved him further away from the compound and then drew the gates closed. They both stood watch until the man stumbled away.

Returning to our house, Brian and Harold found Sarah next to me on the couch in the living room trying to console me. I was beside myself. She cradled my head in her arms.

Brian left to join his family who had returned to their home.

Harold sat on the couch and wrapped his arms around us both.

“No one will ever take you from us, Halke. No one. That man was just a drunk.”

We sat like that for some time. Eventually I asked to be excused to go to my room and take a nap. In truth, I was not sleepy. I knelt by my bed, folded my hands, and prayed as I had never prayed before. I remained that way deep into the night.