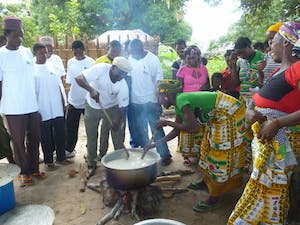 To combat the malnutrition, Food for the Hungry (FH) created care groups for fathers and mothers to learn about nutritious foods and hygiene for disease prevention and improve health.

The care groups consisted of one FH staff teaching 10 to 15 people. Once the people in the group learned the information, they formed their own groups of 10 to 15 people and taught them. The life-saving health information traveled throughout the community through social networking. This is where Momedi learned about enriched porridge.

In an effort to keep children from being victims of malnutrition, care group members learned how to make a vitamin-enriched porridge to support children’s immune system. Care group members learned to identify different local foods that provided a variety of nutrients, like fish, coconuts, onions and tomatoes. Momedi took this information and started creating nutritious recipes that tasted good.

Ingredients for Momedi’s porridge: Cassava, tomato, onion, coconut and fish. How to prepare: Boil peeled cassava for 40 minutes until you can mash it with a fork. Boil skinned fish for ten minutes. Add boiled cassava (after mashing into a smooth paste) and fish into pot with coconut milk, grated coconut, chopped onions, chopped tomatoes, salt and cook for 20 minutes. Serve hot.

He became a leader of his own care group and shared his new recipes with the members. The men in his care group spread the word about Momedi’s dishes. Now, Momedi’s recipes have become wildly popular and used throughout the community—he is considered to be the village chef.

When asked what motivated his dedication to the Food for the Hungry program, he responded, “I train them (parents) so that they can ensure the well-being of their community and of their children!”

This is just one example of how FH partners with the poor to find solutions that will last. With the information about nutrition, the mothers and fathers of Chuculua will prepare healthy meals, passing down recipes to their children.  The generations to come will know how to eat healthy. Thank you for being a part of the solution to end poverty in communities like Chuculua.