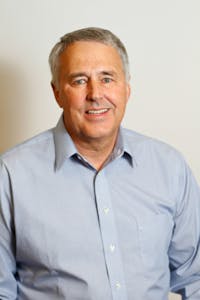 Today Food for the Hungry (FH) has a new President/CEO, Gary Edmonds.

God has prepared Gary throughout his life for this responsibility, a position that demands not only a well-developed business acumen, but a special blend of character, commitment, compassion and humility. His previous leadership roles speak to each of those attributes.

Prior to assuming the position of CEO, Gary had pastored Crossroads Church in Geneva, Switzerland, and had been President and European Director of Christian Associates International, before becoming the Senior Associate Pastor of Mariners Church, a multi-campus church based in Irvine, California. He has held director and executive roles at Interdev, Churches Together, the World Evangelical Alliance and Breakthrough Partners. He has served on the FH Board of Directors for the past eight years.  No matter what the task or the organization, Gary has excelled in positions that require an unusual depth of understanding based on a strong, biblical worldview and the role that God has given him within that context. That is the role of a servant-leader.

We had the opportunity to sit and chat with Gary. Following are a few excerpts from that conversation that we believe will help you to know the man behind the resume.

FH: How and why did you first become involved with FH?
GE: In 1984, some of the staff from FH’s international operations in Geneva began attending a church I was pastoring. As I got to the know them, we began sending out mission teams to Uganda. My daughter went on two teams. I saw how she and others in the church were changed from that experience. The mission of FH aligned with my own passion. I liked seeing that when you apply the truth and the love of God to the plight of the poor, you can make substantive, sustainable differences. I’ve stayed involved with FH since then.

FH: What one thing has touched your heart the most during your time with FH?
GE: I watched a community in the hills of Guatemala transition and attended their graduation ceremony. The leaders told us what they had learned. Mothers told us how they had learned to better care for their children. They presented their vision as a group and said they were ready to take it on themselves. They had gone from struggling to thriving and were now ready to use their own wisdom, skills and leadership to keep their development moving.

FH: What do you hope to accomplish at FH?
GE: I have a three-fold vision. The first is to expand our ministry into more communities, to help even more people. Secondly, to learn how to most effectively partner with the indigenous leadership of the countries in which we serve. Finally, it is to continue to develop and follow the child-focused program model that has proven so successful for the people we serve. We need to apply this in major urban as well as rural contexts.

FH: What would you like to say to your staff?
GE: I would remind them that all sustainable change starts from within. It must first come from within ourselves and then from within our organization before it can begin in those whom we serve. The people at FH are at once humble and courageous. Not only must we strive to help those caught in abject poverty and perilous situations, but we must continue to do so without being defeated by pride or by fear. When we serve people in poverty, we must do it in a way that respects and restores their dignity despite their circumstances. We can only do that by being continuously transformed ourselves and continuing to serve with humility and courage.

Marty Martin, who has been our Acting CEO, will retire at the end of November after assisting our new CEO through a month-long transition period. Marty described Gary Edmonds as bringing “a worldwide network of relationships . . . ready to lead FH in its mission to bring about transformational and sustainable change in the areas of the world that are suffering most from extreme poverty.”

Please remember to pray for Gary as he leads FH and for Marty as he retires.