I’ve always wanted to be a good gardener, but somehow I kill everything I plant. I’m so far from having a green thumb, that I might not even have a thumb at all. For me this is merely a disappointment, but not a crisis. I have grocery stores for food and fully developed industries where I can work to earn a living, so I don’t need to be good at farming.

Some people aren’t so lucky. For many around the globe, farming is their livelihood. It is the food they eat and the income they gain. These people cannot afford to lack the knowledge about farming and planting that I do, and yet many of them do not have access to the education and training they need. 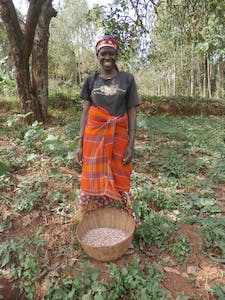 Marie Laeticia stands over a bowl of her beans harvested this season.

Uwimana Marie Laetitia, a 38-year-old mother of four from Burundi, knew this struggle too well. She and her husband Bucangenda Serges owned a one-acre farm on which they grew beans.

“We never produced more than 30kg even in the best weather conditions,” Marie Laetitia said.

Marie Laetitia and Serges could only ever grow enough food to feed their children one meal a day for two months, before they would run out. They had to resort to working outside their farms to increase their income.

Then in 2007, they became involved with Food for the Hungry (FH) where they learned a farming technique called “Farming God’s Way.” The technique teaches farmers how to maintain soil fertility by avoiding over digging, using appropriate fertilizers and organic manure and covering the soil with mulch to protect its biodiversity.

“I am surprised at the difference between the two techniques,” Marie Laetitia said.

She says her family has made incredible increases in crop production season after season as they continue to practice the restorative agriculture that FH Burundi promotes. 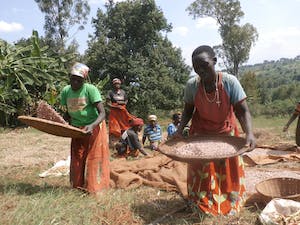 A group of women sieve through Marie Laetitia’s bean harvest.

Over those four harvesting seasons, they were able to increase production over seven times! Marie Laetitia says they also increased their corn production and plan to extend this method to other parts of her farm. The food they are producing is enough to feed their children two meals per day!

“God has opened a way for me to improve the well-being of my family,” Marie Laetitia said.

If you’re anything like me, you may not be good at growing things at your home, but you can help people like Marie Laetitia and her family grow more food at their home by clicking here.