Corporate partnerships with non-government organizations increasingly give priority to ending poverty in the lives of some of the world’s most vulnerable people.

It’s wonderful working for a non-government organization (NGO) that serves the world’s most vulnerable people. As my children have grown and thought about what they’d like to become, they are strongly influenced by the importance of working in a way that is mindful of the poor and of the planet. As they’ve considered their futures, I’m quick to remind them that NGOs don’t have the market cornered on serving the poor. Both government and corporate partnerships offer other opportunities.

We are familiar with the importance of religious groups serving the poor. Governments around the world also have reducing poverty as some of their top goals. Where does that leave the private sector, and what is its role?

Corporations and others in the for-profit space have historically focused on profits and shareholders. In the past, most have not placed the interests of needy people at the top of their priorities. Times are changing, and corporate partnerships with NGOs are becoming a high priority.

The Value of Corporate Partnerships

There is a growing convergence around the ideas that everything we do should be value-adding to society and the planet, not simply focused on profit at any cost. Many Fortune 500 companies have structured their strategy around sustainability—doing right by the shareholder (profit), the environment (planet) and those in need (people). Call it the three P’s. 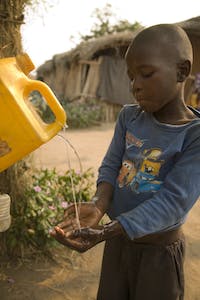 A corporate partnership helped FH teach mothers in Mozambique how to keep their children healthy through simple household changes like washing hands before eating.

Africans would call this the three legs of the stool that will keep things balanced.

Jed Emerson, an expert in the intersection of business and poverty eradication, refers to this new way of doing things as becoming “blended value” organizations. He suggests that organizations have often made assumptions about what they can or can’t do simply based on their legal status rather than what would work best.

Just as non-profits hire MBA graduates to help start businesses that help give poor communities a leg up, Emerson would suggest that profit-making organizations should hire folks who can help ensure that their products and services are more sustainable and clearly adding value, not just to the bottom line, but to the planet and society. In fact, new IRS rules allow for the registration of a L3C (low profit limited liability company), which is more geared to social entrepreneurs.

As populations grow globally and we become aware of the serious and worrying challenges that confront us on the sustainability front (diminishing freshwater resources, acidification of oceans, increasing violence and human displacement), it is clear to most that we should do more with the resources we have. We don’t want to rely on Elon Musk’s Space X Program, which has a goal of colonizing Mars to give humans a “Plan B” after this planet is used up!

Doing more with less is the norm now around the world. Governments are cutting budgets globally, and one of the first places to feel the pinch is international development support. Whereas NGOs relied heavily on government funding, these governments are shifting their strategies to enable their own compatriots to compete in the international marketplace.

This is strategic in terms of limited funding and also recognizes the rising role of the private sector in creating value across the triple bottom line of the three Ps described above. It also means that NGOs competing for government international development resources to fund their work will find the challenge growing as the resources shrink.

The Role of the Private Sector

The United Nations celebrated the end of its Millennium Development Goals (MDGs) in 2015, and launched the new Sustainable Development Goals (SDGs) that will run through 2030—aimed at ending severe poverty. The unique thing about the SDGs is the reliance on the private sector to deliver the results. The MDGs relied almost exclusively on governments.

This means that NGOs have a great opportunity to work in partnership with the private sector. Organizations like Food for the Hungry (FH) must understand more about the private sector and help it succeed in ways that are truly impacting to vulnerable communities. This includes helping them to develop products and services that make a difference in the lives of the most vulnerable. 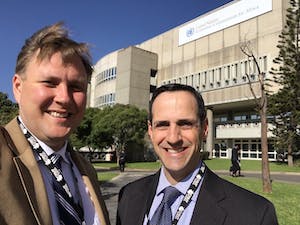 FH has a strong history with the corporate partnerships and is a member of professional organizations that encourage corporate sustainability.

Perhaps the most impressive FH example of this king of partnership is the 1991 founding of a micro-finance bank in Kenya called Faulu that has grown into a publicly traded company, a majority of which is owned now by Old Mutual.

Another example is a partnership with the oil and gas company Anadarko in Mozambique. Anadarko partnered with FH to help change household habits for preventive health, hygiene and sanitation.

It is incumbent on all of us in the NGO space to look at the private sector with new eyes and see how we can partner in ways that serve the most needy among us. It won’t necessarily be simple, but it will be worth the time in the long run.