What happens in the first hour after a baby’s birth can change the child’s life forever.

Enat Abebe learned this when she joined one of Food for the Hungry’s (FH) Care Groups in rural Ethiopia. The 31-year-old mother of five was pregnant with her fifth child, her son Habtamu, when she started learning about health and nutrition in the supportive training groups.

When her previous children were born, Enat immediately fed the babies either fresh butter or a porridge made from fenugreek. Mothers in her village thought these foods would open up the baby’s intestines. But she skipped feeding her babies colostrum, the super-nutritional breast milk that mothers produce right after a baby is born.

Colostrum is a major natural weapon in fighting newborn and infant sickness and death. It’s low-fat, high-protein, and filled with disease-fighting antibodies.

Within a few weeks of her older children’s births, Enat reduced breastfeeding and started feeding her children foods other than breast milk. This was the custom in her area, what mothers had always done. As a result, her babies’ diets lacked vital vitamins, minerals and protein just when their bodies needed it most.

Enat’s children have survived and grown. But sadly, that’s not the case with hundreds of thousands of babies worldwide each year.  Without proper breastfeeding, babies often die of infectious or malnutrition-related diseases.

Making changes to save children’s lives

Enat’s story is common worldwide. That’s why FH teaches about breastfeeding as part of our health and nutrition training.

“There are often cultural beliefs that sometimes keep women from breastfeeding at optimal moments,” says FH breastfeeding expert Karen Calani, who has helped develop training curriculum for mothers in Guatemala and other countries. For example, they often believe that they don’t have any milk right after the baby is born, and therefore don’t nurse when the colostrum is, in fact, flowing. That in turn delays the milk “coming in” and the baby loses very precious days of nutrition.

Calani also mentions that some of the other preparations, like porridges, can be made from contaminated water. Or they may even use liquids that contain caffeine, a natural diuretic. Either method can cause dangerous diarrhea – one of the most common killers of children under one year old.

FH also works within the community to change ongoing attitudes about breastfeeding habits. Calani’s work in Guatemala, for example, trains mothers to watch their babies carefully to respond and feed them when they are hungry. A baby who has cried for a long time from hunger may not suckle as long, and therefore won’t derive as much nourishment.

After FH’s training in Guatemala, grandmothers who were part of the lessons began encouraging their daughters to breastfeed their babies, rather than scolding them for taking too much time out of their day for this important activity.

A new way of doing things 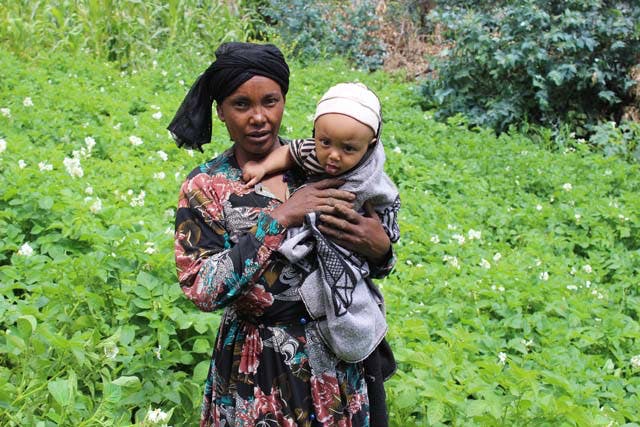 In Enat’s case, when her baby Habtamu was born, she fed the baby colostrum within the first hour after birth. She also avoided food other than breast milk for the first six months of Habtamu’s life.

And when she did start feeding him solid food, she used some FH-recommended recipes. She mixed a porridge of various locally available cereal grains with beans or peas. She was taught to add a little salt and cooking oil as well.

And she was able to enrich the porridge with eggs from her own chickens, which she received from FH (along with training on how to raise them).

Enat subsequently became a health and nutrition trainer to women in her village, with her son as Exhibit One. “Habtamu is stronger than his brothers and sisters were at his age, and he doesn’t cry at night like they did, because he’s better fed,” Enat said.

If you’d like to learn more about Food for the Hungry’s worldwide efforts to eliminate poverty, and read more stories about mothers like Enat, download our free ebook, The Remarkable Truth about Ending World Poverty.