A Day in Haiti With Taina 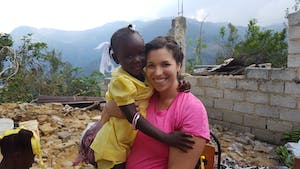 Earlier this month, in only a way God could orchestrate, Alicia Groce visited her sponsored child, Taina, in Haiti. The experience changed her life.

But let’s back up a little bit. Alicia, a pediatric optometrist, a faculty member at an optometry school and a volunteer with the youth group her husband leads, also helps with a ministry that aids women across the world through jewelry creation. She felt the people of Haiti specifically pulling at her heart. She knew she wanted to sponsor a child there, but needed to find an organization that was the right fit.

During a Toby Mac concert last year, she visited the Food for the Hungry (FH) booth at intermission. She asked a little bit about FH and learned about the mission to go into a community to help people rebuild and become empowered.

“This mission spoke to my heart,” Alicia said.

She asked if they had a child from Haiti. The volunteer at the booth picked up Taina’s sponsor card. To Alicia’s surprise, not only was she a little girl from Haiti, but they shared the same birthday!

“I knew in that moment, only God could have orchestrated such a partnership.”

Over the next year, they started writing letters, and Alicia learned a little bit more about Taina’s life, like that she loves to sing and play and goes to school with her cousins. During that year, Alicia visited Haiti with a group of students from the college where she works to provide eye exams at a school for handicapped in Port au Prince. But she didn’t have the opportunity to visit Taina.

“I didn’t even know at the time if it was a possibility to visit her,” Alicia said. “I knew that I had to go back to Haiti and meet this sweet child who I had been writing to and praying for.”

Then, at the beginning of October 2016, she had the 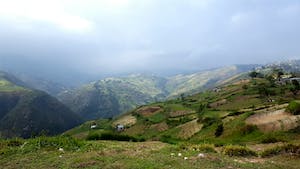 opportunity to travel back to Haiti. Her itinerary included delivering glasses to children, but she ended up with an extra day in Port au Prince. FH staff helped her plan a visit to see Taina during that one-day break. It turned out that Taina only lived 23km from where she would be. Alicia brought a backpack with school supplies for Taina and anxiously awaited their meeting.

But right before her team was supposed to leave, Hurricane Matthew was predicted to make landfall in Haiti. Alicia was afraid for her friends and for Taina, her family and her community.

“I gathered my friends and my church family in prayer,” she said.

Friends in Port au Prince kept her up-to-date on the weather as the hurricane made its devastating landfall. A few days before her planned departure, she heard that the area she was visiting was mostly spared from the storm. The team was able to travel to Haiti as planned, helped provide glasses, and then the visiting day with Taina had arrived. 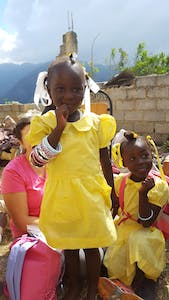 After what Alicia describes as a “breathtakingly beautiful” car ride up the mountainside, the road ended and a dirt road began. She and the team had to trade cars for something more suitable for mountainous, rainy terrain.

“As we entered Taina’s community, the clouds began to dissipate, and the sun started to peek through,” Alicia said.

As she walked down the winding dirt path to Taina’s house, she noticed cinderblock and cement houses, crops of beans and plantains and pigs rolling in mud and squealing. Families greeted them and showed them the way to Taina’s home. At last, they would meet.

“She walked in so shy in her beautiful yellow school dress,” Alicia said.

They sang songs, played patty-cake, took selfies and tried on Alicia’s sunglasses. Taina’s father showed her the home and a part of the wall and tin roof that had been damaged by the hurricane. When Alicia gave Taina the backpack, she showed the most excitement about a flashlight. When she switched it on and off, a big smile crossed her face. 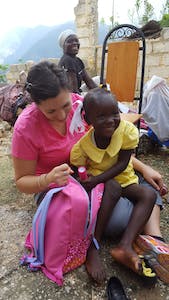 Then the time came for goodbyes. The family and FH staff prayed with Alicia and Taina. They took more pictures. Then Alicia headed back down the mountain.

“I am forever grateful for God bringing Taina into my life. She gives me joy and a connection to the place my heart loves – Haiti.”

Alicia’s visit to Haiti impacted her forever. After the experience, she now hopes to partner with her church to support the development of Taina’s community. To learn more about how you can experience the joy of sponsorship alongside Alicia, click here.