John Rey, a boy in the Philippines, experienced a life change in the 5th grade. That’s when he and his family received a water filtration system through their community’s participation with Food for the Hungry (FH). Prior to that time, John Rey didn’t have access to safe water. His family’s water came from an open well near a river that was open to bacterial contamination. Since receiving the water filter, John Rey doesn’t worry about water-borne diseases. He’s free to study, grow, and thrive. 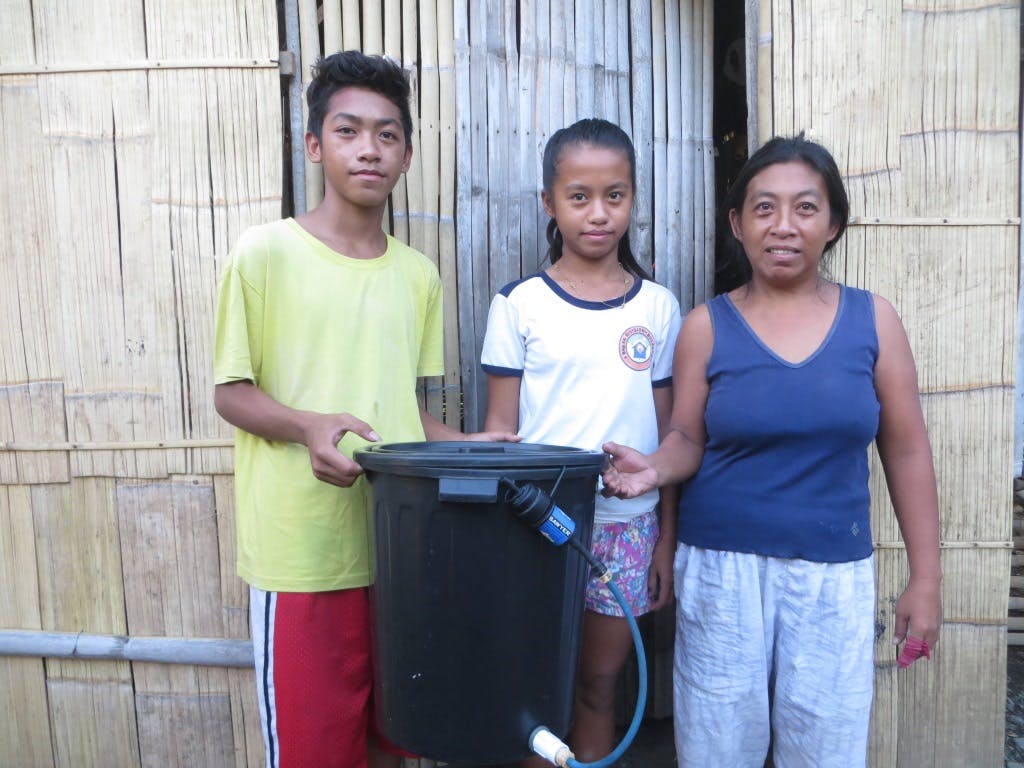 Since receiving a water filtration system, John Rey and his family don’t worry about water-borne diseases.

The story behind John Rey’s water filter starts across the world in Germantown, Maryland, at a church called Journey’s Crossing.

Several years ago the Outreach Pastor at Journey’s Crossing, Darin Brown, sat down with the then-president of Food for the Hungry, Dave Evans, who was a member of the church.

“He shared an exciting program… where churches would be assigned specific communities with a goal to help them transition out of extreme poverty in five to seven years,” Darin said. “The appeal for our church was that we were not doing anything like what was being proposed… We had never been challenged to partner with a Christian organization to change an entire village in the name of Christ.”

Darin shared that he felt energized by the idea of partnering with a community. “We were ‘all in’ on the idea of tacking on poverty in relational and diverse ways,” he said. “We also loved the prospect of building friendships with area church leaders, government officials, school teachers and other community leaders focused on the same goal. Quite frankly, we had never been exposed to these ideas which make total sense in retrospect.”

Journey’s Crossing decided to partner with FH in the village of Matictic, a community in the Philippines. Later, Darin said, they learned that community members had been praying desperately for a church partner. God had answered the prayers of this Filipino village by sending Journey’s Crossing.

FH uses an integrated approach to solving poverty,  walking with community  members to identify solutions to problems in all areas of their lives. Journey’s Crossing shared child sponsorship with the congregation, and many individuals and families chose to sponsor children. As a result, the ongoing work in the community was funded, allowing FH staff to have a year-round presence in the community to address the most important issues facing the community.

Through short-term teams, Journey’s Crossing members deepened their relationship with the community.

As FH staff worked alongside this community, one major issue they encountered was the need for clean water. Kristen Wilkenson, a volunteer advocate for the partnership at Journey’s Crossing, explained the critical need. “Families were forced to spend hard earned dollars on bottled water or walk long distances several times a day to retrieve water. Others, near the river, were drinking from contaminated wells resulting in sickness and missed days of school for many children.”

A community member shows the difference between contaminated water and clean water.

“We purchased nearly 100 water filter kits and delivered them, along with training on how to use them during our house visits that first year,” Darin reported.

John Rey and his family benefited from this donation, which forever changed their experience with clean water.

“During one of our return trips we met with several families that had received filters in the past,” Kristen said. “Their stories were amazing. Kids weren’t missing school. The baby in one family who had been sick and not thriving was now growing and healthy, and families who had received filters were sharing water with their neighbors.”

Over the past five years, Journey’s Crossing has continued to deepen their relationship with Matictic through short-term teams, child sponsorship, and additional projects. From the beginning, they have known that their presence in the community would be temporary. FH partners with a community only until its residents are equipped to continue their development process without outside intervention. Matictic has made extraordinary process, and so this community will be graduating from the FH program in 2017.

For Journey’s Crossing, the graduation is positive. “I led (our 2016) trip and was so encouraged to hear of the specific progress we had made over the course of our partnership,” Darin said. “Goals had been accomplished and people were so much better off than when we had first visited.”

Specifically, child sponsors from Journey’s Crossing noted that their sponsored children had been transformed. “I actually saw pretty dramatic changes in my sponsored child’s living conditions, clothing, health, and the overall status of her family,” Darin said. “Other team members witnessed the same kind of changes and there was a real sense of joy and accomplishment.”

Kristen will lead a final trip to Matictic in spring 2017. She said, “While we’re sad to close this chapter, we couldn’t be more proud of this beautiful community which has grabbed our hearts and will never let go. We wish them well.”

The graduation of Matictic doesn’t mean that Journey’s Crossing is done with FH. They are starting a new partnership with FH, this time in Ethiopia, in 2017!

Interested in impacting the life of a child like John Rey? Check out opportunities to give clean water in our gift catalog, or sponsor a child (fh.org/child) today.

You can also learn more about the four steps to starting a church partnership.