When you sponsor a child with Food for the Hungry, you become one of more than 139,500 sponsors all around the world! This means nearly 140,000 children who go from surviving to thriving, and whose lives are changed for the long run. We consider ourselves truly blessed when sponsored children share their hopes and dreams through their letters. When children dream of their future or plant flowers around their homes, they are small but powerful signals that the darkness of poverty is losing its grip. Every so often, we’ll hear about children who are pursuing their passions in ways that are unique to how God created them, too. One such example is Widchy, a 20-year-old young adult and sponsored child in Haiti who writes slam poetry in his free time!

A Rising Star in Slam Poetry

Slam poetry is a spoken word form that is performed live to give the words life. While it can be similar to rap, slam poetry is typically more driven by beats and not musically performed. While Widchy likes studying math in school, karate, and wants to be an agronomist when he grows up, he is also used to flexing the right side of his brain. When FH began working in Widchy’s community in 2011, he began to develop a sweet relationship with his sponsors. As Widchy grew an interest in slam poetry and began writing and performing, he also frequently sent his poems to his sponsors.

Just last year, Widchy approached Food for the Hungry staff in Haiti and asked them to help him publish a book of his slam poetry. FH was more than happy to help make his dream a reality. After some hard work, finally, he published his first anthology, titled “Heterogeneity.” Widchy wrote about everything from his family to his community. While his poems were written in Haitian Creole, we’re excited to share two of his translated poems.

Two Poems About Kindness and Charity

kindness of the mother

who puts an end to his problems

who knows how to fight to win

she knows how to resist

there are fathers’ mothers

mothers who are proud of their mothers

mothers who raise their children without fathers

mothers with hearts filled with love as vast as the sea

my mother is a good woman

mother you are my earthly angel

who protects me constantly

as long as you’re there, I do not have any stress

my mother is a soldier

who fights against misery

I am a truck whose engine is my mother

for her, I’m ready to do anything that is not up to me

for I want to give her all my honor

all the commandments are summed up in one,

owning a nice car, a nice house and a lot of money means nothing

the greatest wealth we can possess

is love and charity.

if this weren’t the case

no one could coexist

God from heaven, gave us the example

charity is the most precious gesture

she is the limit and equality of all things.

knowing that it’s difficult to find

no matter where you go

so all over the world we should practice this virtue

believers as well as unbelievers

no matter who you are

be good to each other

We chatted more with Widchy to learn about his passion for slam poetry, and the inspiration behind his beautiful words. This is what he said! 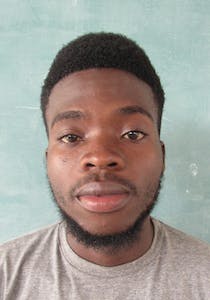 1. How did you start writing and practicing slam poetry?

In elementary school, I had a homework assignment to write a poem. At first, I found it difficult to produce this kind of text. But in the end, among more than 50 students I had the highest grade. Since then, I realized I had a gift, and I started writing and practicing slam poetry.

2. Is there a big culture of slam poetry in Haiti?

Unfortunately, slam poetry is not very well known in Haiti. But I am convinced that in a few years slam will be as popular as other styles like rap and compas (traditional Haitian dance music, similar to méringue).

3. What inspired you to start slam poetry? What topics do you write on?

I do not write on a specific subject. Anything that affects me or my community such as nature, politics, and the church can inspire me.

4. How would you describe your style of slam poetry?

Describing my style is quite difficult! However, I do my best to be authentic.

5. When do you write your slam poetry?

For me, after school is the best moment to write. I make a lot of effort to finish my homework at school to have free time to complete this book.

6. Is your family supportive of your slam poetry?

Yes! I live with my parents and I have four other siblings. I’m the youngest. I just completed my studies this year in June, and live in Petion-Ville.

Among all the people who encouraged me, my mom supports me incredibly and unconditionally.

7. How did Food for the Hungry help you publish your book?

FH was one of the nonprofits that most helped me publish my slam poetry book, “Heterogeneity.” In fact, I would not succeed without FH. At first, I sent several letters to other organizations to help me publish my book. To this day, they still remain unanswered. Only FH answered my call.

8. Is the book being distributed locally in Haiti?

Yes, I was able to organize a signature sale in my school and also in my church.

You can be a part of helping children and youth around the world pursue their passions, even in hard circumstances. In fact, when you sponsor a child for less than $2 a day, you can feel connected to someone living on the other side of the world. Join FH in our work together as we encourage the talents of the next generation, escaping poverty and building a thriving future! Whether it’s through donating storybooks to inspire creativity or sponsoring a girl or boy in Haiti, you are making an eternal impact. Above all, as Widchy said, “charity is the most precious gesture”!

6 Poems You Should Read For World Poetry Day