Hurricane Eta devastated many parts of Central America starting November 3.  You can donate here to Food for the Hungry’s hurricane relief efforts. But you can also pray for the children we work with, and their families. We’ll update this space with pictures and news of the continuing relief efforts.

FH Guatemala has been using all sorts of ways to get food and other items into communities devastated by Hurricanes Eta and Iota.  Today we received photos of one special delivery to 350 families trapped by landslides in the Ixil region.  The Guatemalan government supplied a helicopter to make the airlift. See the photos below showing the helicopter being loaded, received today from FH Guatemala staffers. 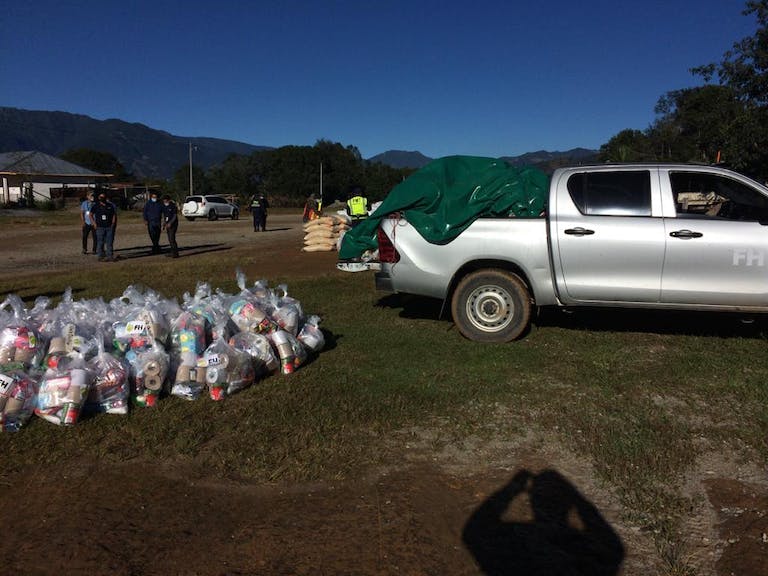 Waiting for the helicopter to arrive, with the packages for the households. 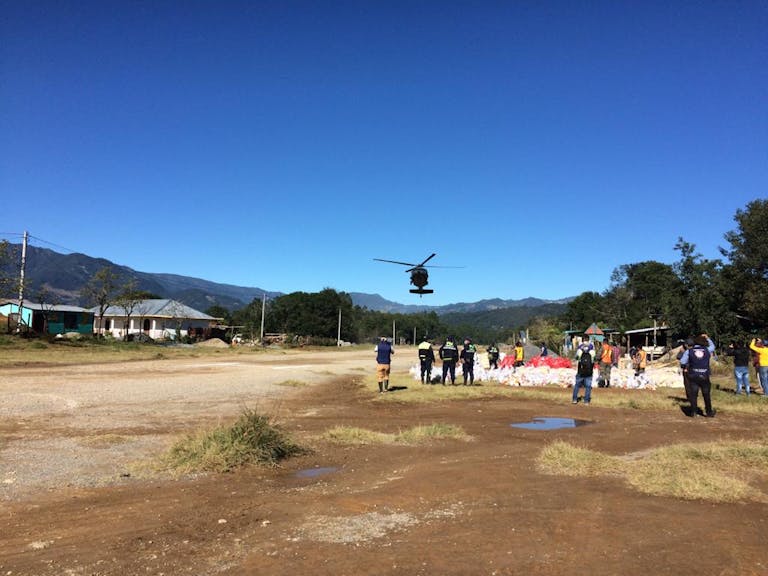 The helicopter arrives in view 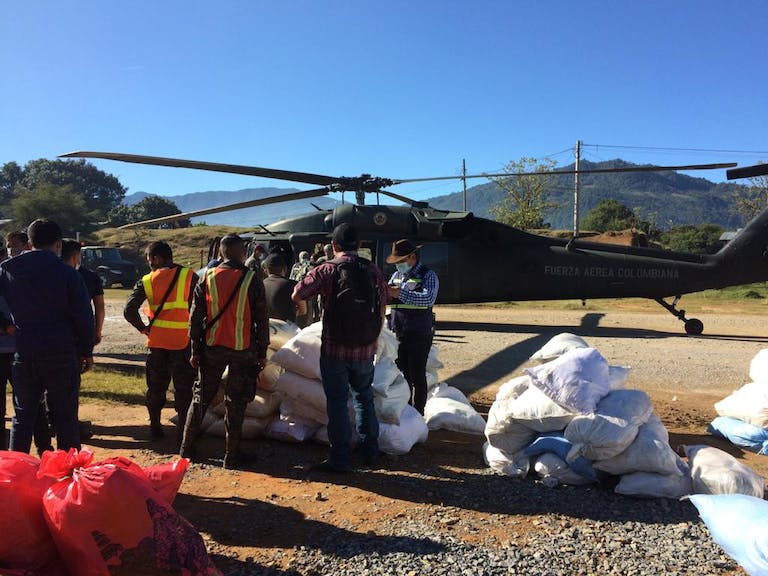 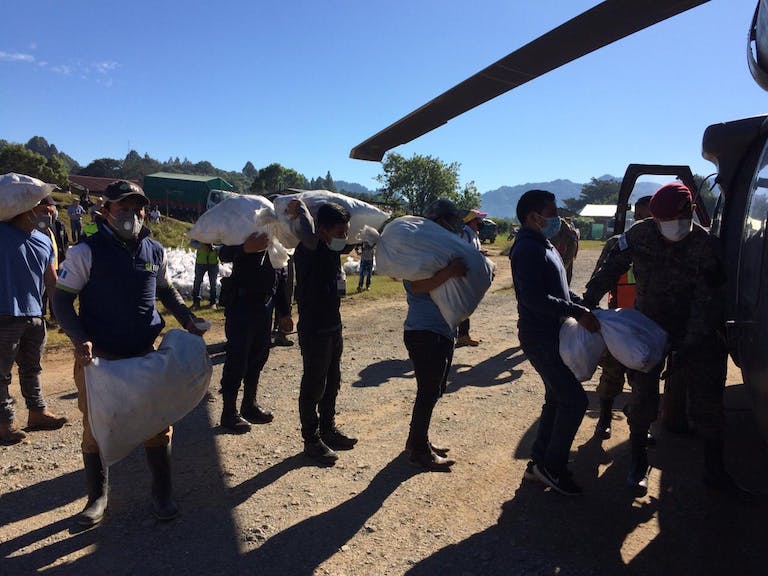 A thank you to all who made this possible!

Food for the Hungry staff have been able to reach some communities to provide distributions of basic groceries, hygiene items, and blankets. Roads blocked by mudslides continue to be a major barrier. But little by little FH is reconnecting with the families we work with, keeping long lists of their needs so that they can be helped. 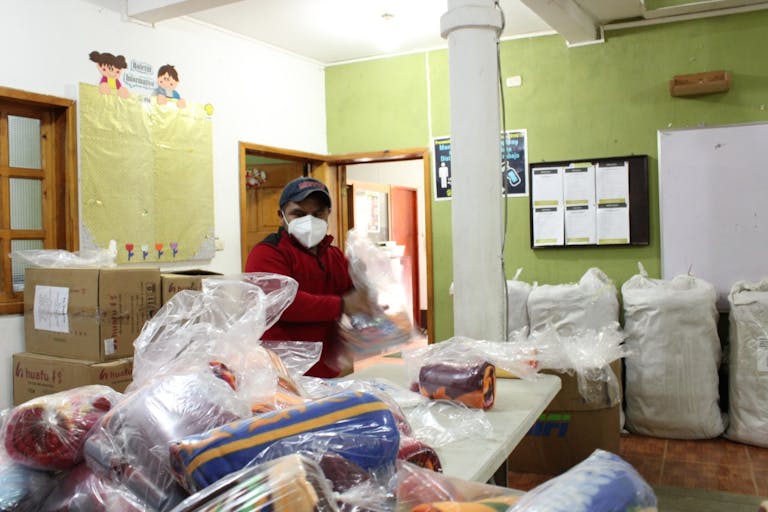 Preparing distribution packages for Ixil region, including blankets so people can keep warm, wherever they’re having to sleep right now. 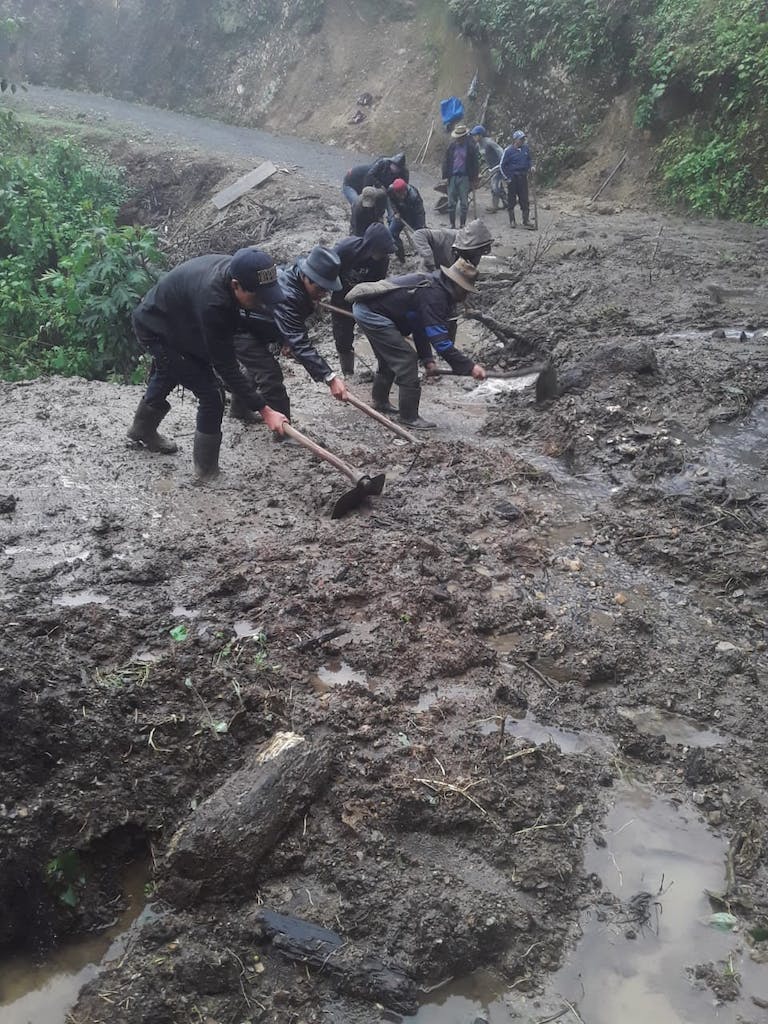 Local leaders in Ixil region removing mud and rocks from landslides that are blocking roads into their communities. 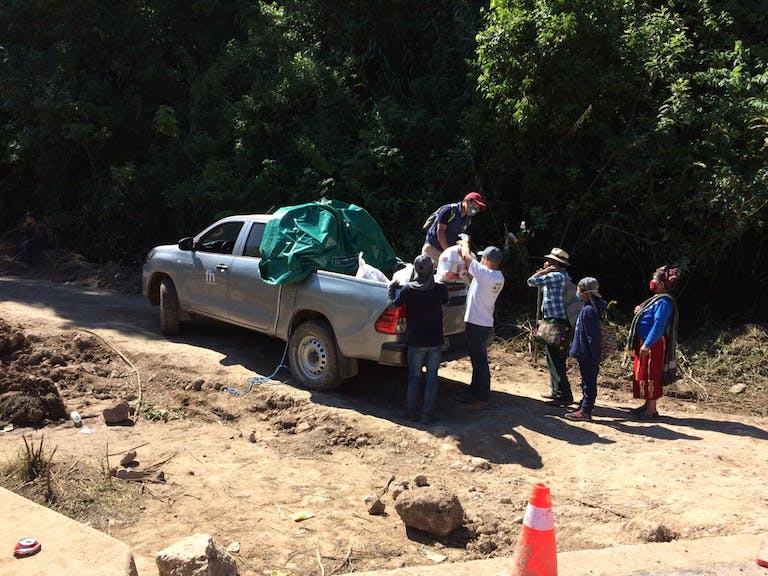 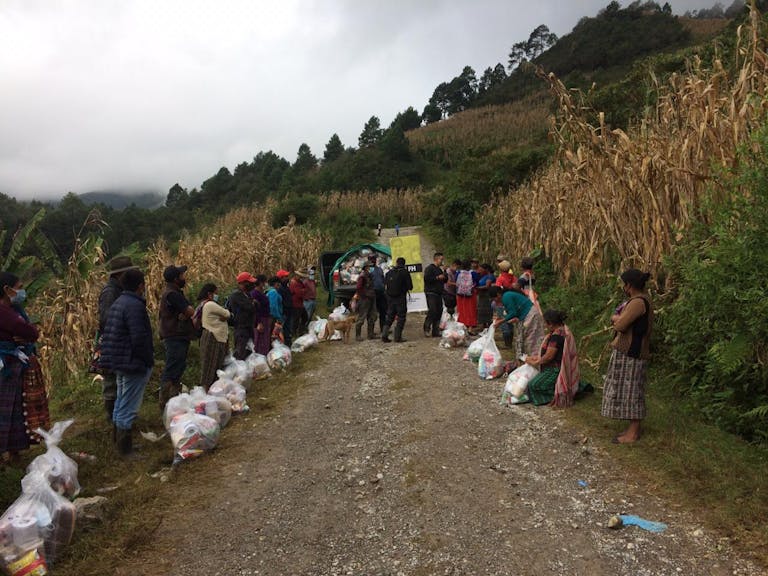 Community members with their relief bundles.

FH staff members started sending photos of destruction to supporters almost immediately after the storm hit. Several staff had to evacuate their homes. These photos came in the first hours after it was safe to go outside, and FH began talking with community leaders and families to assess the damages. 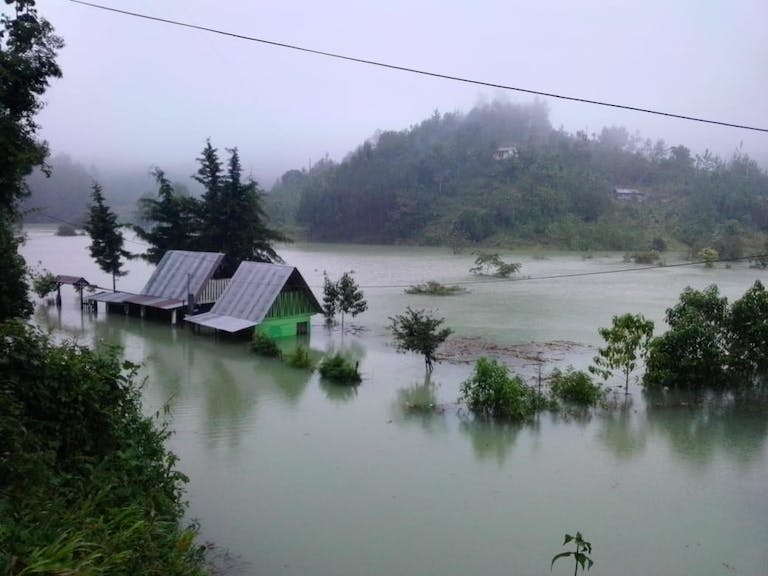 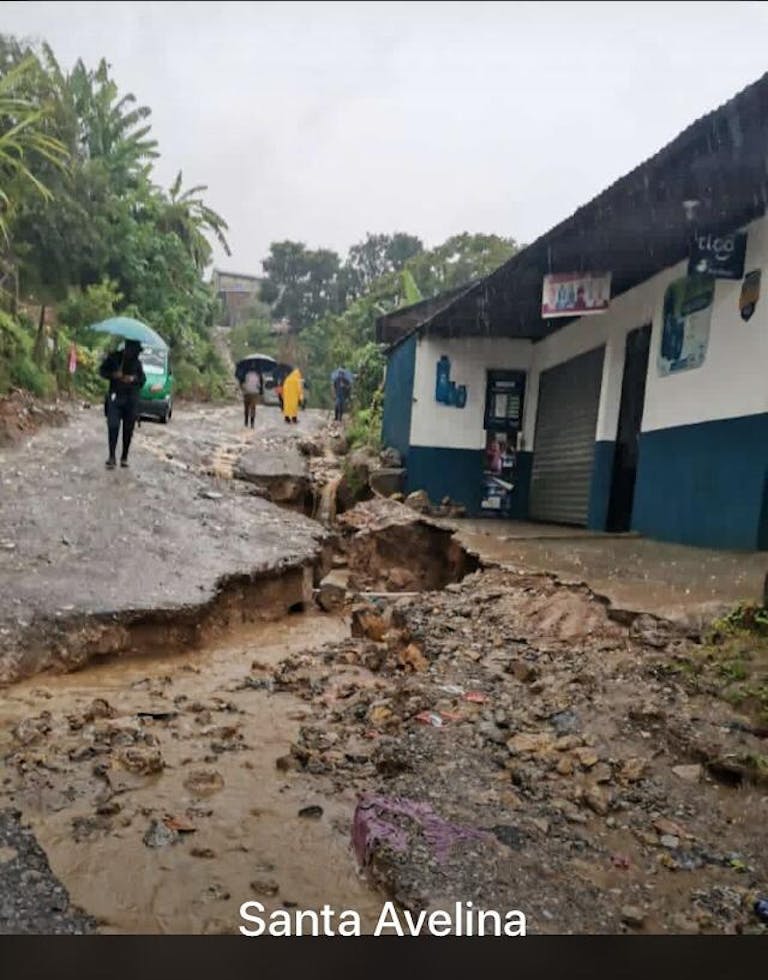 We’re publishing these photos exactly as we received them, from staff who wanted supporters to be able to pray for specific communities. That means they often wrote the names of the communities right on the photos, taken on their cell phones. In Santa Avelina, in Guatemala’s Ixil Triangle region, you can see how the water is ravaging roads. This means food, water, blankets, and COVID-19 protection items (masks, hand sanitizer) will have to be delivered on foot or via motorcycle, rather than carried in four-wheeled vehicles. 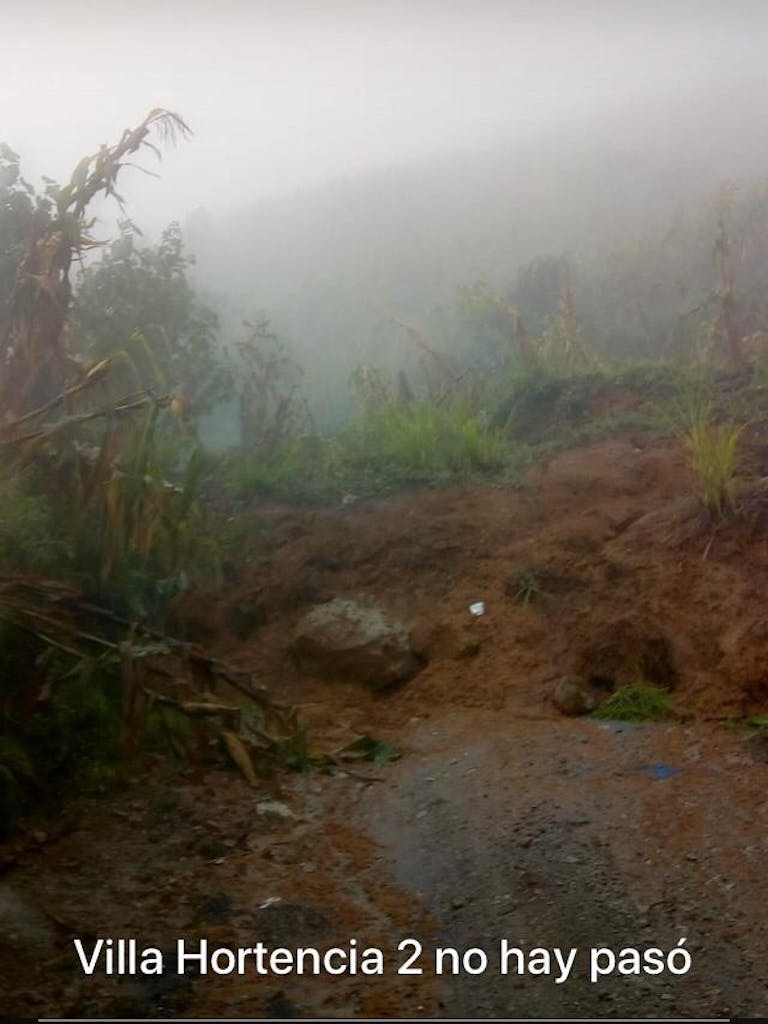 Mudslides like this one in the community of Villa Hortencia 2 remain one of the dangerous threats in FH’s Guatemalan communities. They block passage as the caption on the photos says. But worse, they can be deadly. We received the sad news that one sponsored child named Juan and his mother were killed in Xeucalvitz  (Ixil region), when their house was leveled by a landslide. Please pray for Juan’s father and brother who survived the landslide. They were hospitalized at first but are now recuperating with relatives. 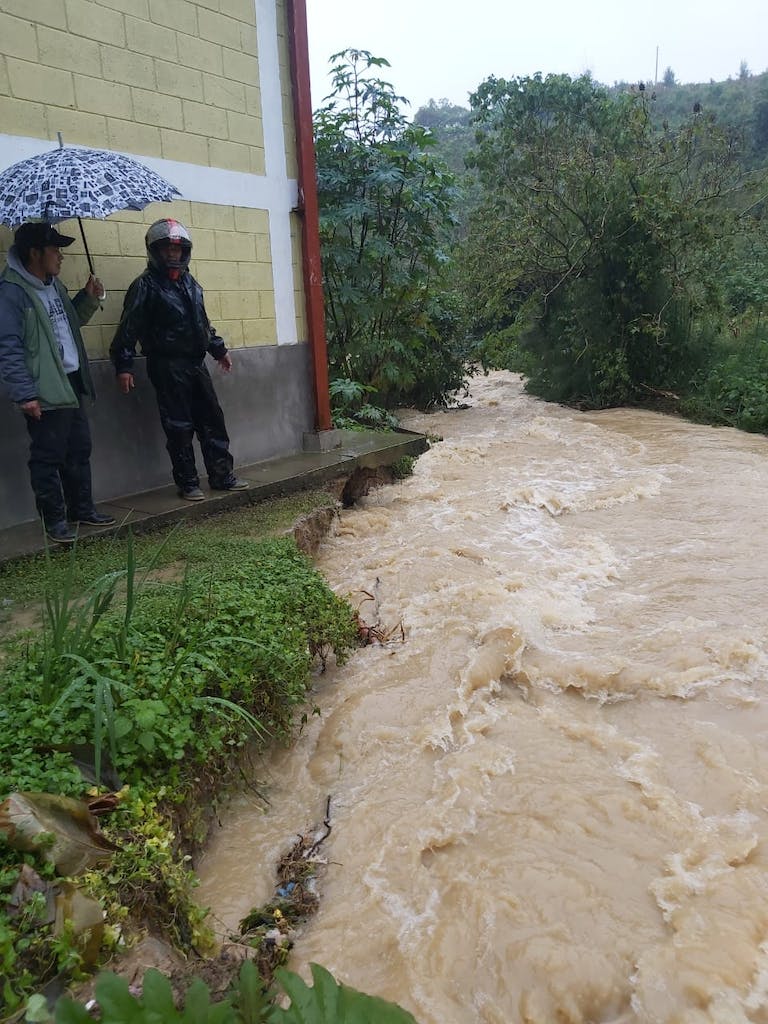 Although the rains from Eta have stopped, this is the rainy season in Central America. It’s been raining most days this week. Residents can only watch as the rains continue to carve away hillsides and potentially damage even more homes and businesses. 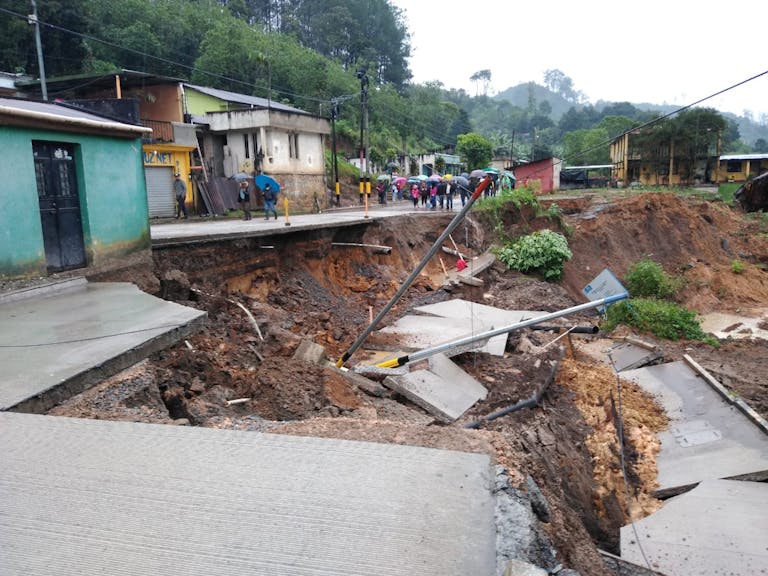 The road running past the community center in San Juan Chamelco (Alta Verapaz) has collapsed. While FH will be concentrating on making sure families are warm, safe, and well-fed in the days to come, long-term work will focus on helping repair damage to vital infrastructure like this road.

GIVE to Hurricane Eta Relief