Meet a Sponsor Who's Prayed for Four Decades

There are many words you could use to describe Barbara “Bobby” Steagall. Faithful. Devoted. Joy-filled. Spunky. Or, as we at Food for the Hungry (FH) like to call her: a “sponsor extraordinaire.”

The essential thing in ‘heaven and earth’ is that there should be a long obedience in the same direction; there results, and has always resulted in the long run, something which has made life worth living. —Friedrich Nietzsche

This quote captures the legacy of how Bobby has lived; a long obedience in the same direction. And through just a small glimpse into her life, anyone can see that direction is up — toward the Father. At 88 years old, she displays a hard-won faith and the gift of committed intercession, embodying the true spirit of a prayer warrior. 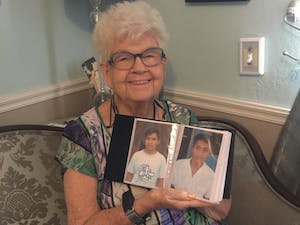 Bobby showing photos of two of her sponsored children over 38 years.

She describes a typical day. “Each morning, I wake and have my breakfast. After, I head into my prayer closet to pray. Then, I find my way over to my prayer couch in the corner of my room. There, I do my devotional and I get out my books, which holds photos of all the people I pray for.” This process takes over an hour, and Bobby does it faithfully every morning.

In her green book are people with cancer that she prays for. In her silver album are the pictures of every child she has sponsored through FH.

Her sponsorship journey has spanned four decades. So long, in fact, that she barely remembers how she first became a sponsor. “You know, it’s been many, many years,” she says with laughter in her voice. “I can’t even remember! I am pretty sure it was through our church at the time, Scottsdale Baptist Church.”

A Sponsor Reaches Out

To Bobby, the details weren’t important.  But her motivation was. “ What I do remember, though, is I knew how blessed my own children were. I wanted to help care for children who weren’t my own, who had less than us. Sponsorship was a special way I could do this,” she reflects.

She began sponsoring her first two children from Ethiopia and Peru some 38 years ago. And little did she know then that she would continue on, decade after decade, to bless the lives of nine children.

So imprinted on her heart are each child, that she listed them off without skipping a beat. “Well, there was Pier, and Juan. And then another Juan! And then Eli and Emerson… oh and Mako! And Median, can’t forget him. And now, I’ve got Meseret and Fabian!” she shares gleefully, as if talking about her own grandchildren.

“And I kept every letter. Every single letter. I have a little packet I keep everything in. They are just so special to me. Over the years, my family would send photos and letters. It brought me such joy to know they would read them and see who we were.” 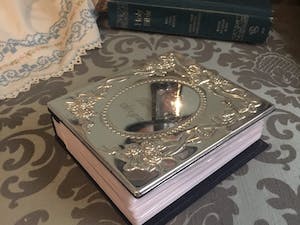 She pauses to open her album and proudly show their faces.

The photos are carefully displayed in a shiny silver wedding anniversary album, which has a story of its own.  “My husband and I were going to celebrate our 60th anniversary in 2009, and I was given this album as a gift. He passed away five days before our anniversary,” she remembers somberly. “So I decided to take that book and use it for good, to put photos of my sponsored children in.”

Bobby seems to have a gift for finding the silver lining. “The blessing of being a widow, I suppose, is I don’t have to worry about anyone else. I can use my days however I want. So for me, that’s for prayer and for meeting up with a group of 11 women to intercede for loved ones together. We also have a What’sApp prayer chain to ping each other with requests throughout the week,” she laughs. “I guess I am pretty hip for my age!”

With each sponsorship, she longed to meet them in person but her calling was at home. “I always wanted to go and visit, but my divine appointment was raising my own,” she shares. Bobby’s legacy is reflected today in her own family: seven children, 10 grandchildren, seven great-grandchildren and one great-great-grandchild. She says proudly, “My children know the power of prayer. And one of my daughters is a missionary in Ecuador.”

Throughout the years, while praying for her own children, she faithfully prayed for her sponsored children. “I have never stopped praying for them to this day. I pray that they are still walking with the Lord, that he is watching over them. He knows their needs and I don’t, and so I keep giving them back up to him. I know Emerson wanted to be an engineer — I pray that his dreams would be realized. All of their dreams.”

A Sponsor with a Changed Life

Bobby’s compassion is contagious and captures the true heart of sponsorship.

“If anyone was considering becoming a sponsor, I would tell them how much it changes you. You just get that child on your heart, and you feel like God is using you to truly encourage them and to show them the love of Jesus.”

She pauses thoughtfully and says with tenderness, “It’s a very special relationship.”

If you’d like to become a sponsor and help lift children out of poverty like Bobby has, please join with us today.

4 Steps to Giving Back This Holiday Season

Watch the Impact of Child Sponsorship — A Story of Two Families