Reading has always been one of my favorite obsessions, ehhh, I mean hobbies. My to-read list is long and full of so many books that I can’t possibly get through them all at the pace that I add to it. I would spend hours at the library and come home with a tote bag full of new adventures to have. As a parent, I have found such joy in passing on that love to my son. Children’s books are a part of our nightly routine and I love watching him remember and recite the words to his favorites, even though he’s a little way out from actually reading the book himself. It’s even better when he talks about them throughout the day and makes his own observations about the characters’ experiences.

Children’s books have quickly become regular purchases as I believe they’re the best way to teach important lessons. Assuming the role of another character and experiencing their lives, joys, and trials in the first person is a powerful way to instill empathy in our kids.

The International Board on Books for Young People (IBBY) is a non-profit organization which represents an international network of people from all over the world who are committed to bringing books and children together. Since 1967, on or around Hans Christian Andersen’s birthday, IBBY celebrates International Children’s Book Day (ICBD) to inspire a love of reading and to call attention to children’s books.

Since today is ICBD, I thought it would be a great chance to round up 10 children’s books that will help teach our kids about poverty, hunger, and empathy. 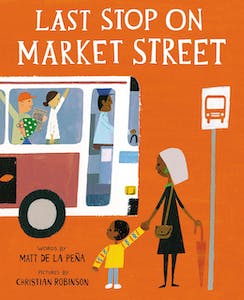 Every Sunday after church, CJ and his grandma ride the bus across town. But today, CJ wonders why they don’t own a car like his friend Colby. Why doesn’t he have an iPod like the boys on the bus? How come they always have to get off in the dirty part of town? Each question is met with an encouraging answer from grandma, who helps him see the beauty—and fun—in their routine and the world around them.

This energetic ride through a bustling city highlights the wonderful perspective only grandparent and grandchild can share and comes to life through Matt de la Pena’s vibrant text and Christian Robinson’s radiant illustrations. 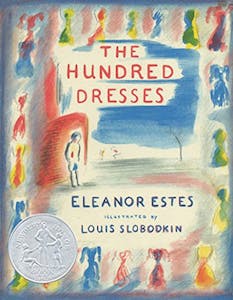 Eleanor Estes’s The Hundred Dresses won a Newbery Honor in 1945 and has never been out of print since. At the heart of the story is Wanda Petronski, a Polish girl in a Connecticut school who is ridiculed by her classmates for wearing the same faded blue dress every day. Wanda claims she has one hundred dresses at home, but everyone knows she doesn’t and bullies her mercilessly. The class feels terrible when Wanda is pulled out of the school, but by that time it’s too late for apologies. Maddie, one of Wanda’s classmates, ultimately decides that she is “never going to stand by and say nothing again.”
This powerful, timeless story has been reissued with a new letter from the author’s daughter Helena Estes, and with the Caldecott artist Louis Slobodkin’s original artwork in beautifully restored color. 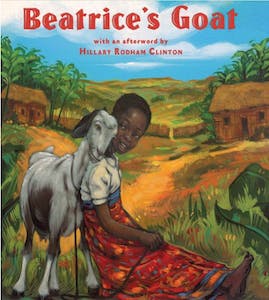 More than anything, Beatrice longs to be a schoolgirl. But in her small African village, only children who can afford uniforms and books can go to school. Beatrice knows that with six children to care for, her family is much too poor.

But then Beatrice receives a wonderful gift from some people far away — a goat! Fat and sleek as a ripe mango, Mugisa (which means “luck”) gives milk that Beatrice can sell. With Mugisa’s help, it looks as if Beatrice’s dream may come true after all.

Page McBrier and Lori Lohstoeter beautifully recount this true story about how one child, given the right tools, is able to lift her family out of poverty. Thanks to Heifer Project International — a charitable organization that donates livestock to poor communities around the world — other families like Beatrice’s will also have a chance to change their lives. 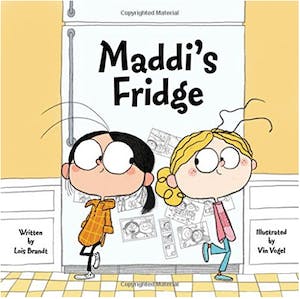 Winner of:
2014 Christopher Award, Books for Young People
2014 ILA Primary Fiction Award
2015 MLA Mitten Award Honor
Human Rights in Children’s Literature HonorWith humor and warmth, this children’s picture book raises awareness about poverty and hunger.Best friends Sofia and Maddi live in the same neighborhood, go to the same school, and play in the same park, but while Sofia’s fridge at home is full of nutritious food, the fridge at Maddi’s house is empty. Sofia learns that Maddi’s family doesn’t have enough money to fill their fridge and promises Maddi she’ll keep this discovery a secret. But because Sofia wants to help her friend, she’s faced with a difficult decision: to keep her promise or tell her parents about Maddi’s empty fridge.
Filled with colorful artwork, this storybook addresses issues of poverty with honesty and sensitivity while instilling important lessons in friendship, empathy, trust, and helping others. The book includes a call to action section, with six effective ways for children to help fight hunger and information on antihunger groups. 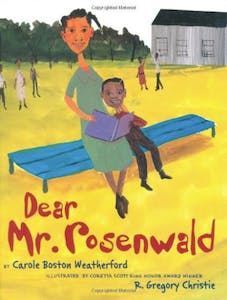 Renowned illustrator Gregory Christie joins the Scholastic Press list with this empowering story about an African-American community who builds their own school.

Based on the true story of the Rosenwald schools built in the rural African-American South in the 1920s, writer and poet Carol Boston Weatherford tells the lyrical story of third-grader Ovella as her family and community help each other build a new, and much-prayed for, school.

Inspired by Booker T. Washington, Julius Rosenwald, the son of an immigrant and the president of Sears, Roebuck, and Co., donated millions of dollars to build schools for African-American children in the rural South. 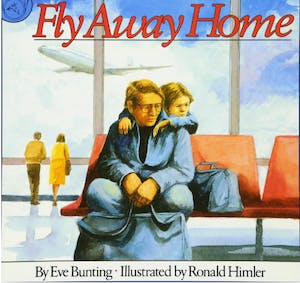 A homeless boy who lives in an airport with his father, moving from terminal to terminal trying not to be noticed, is given hope when a trapped bird finally finds its freedom. 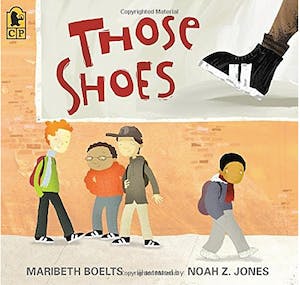 “In this witty, wise picture book, Boelts presents a kid’s eye view of a consumer fad that rages through school at gale force.” — BULLETIN OF THE CENTER FOR CHILDREN’S BOOKS (starred review)

All Jeremy wants is a pair of those shoes, the ones everyone at school seems to be wearing. Jeremy’s grandma says they don’t have room for “want,” just “need.” But when his old shoes fall apart at school, he determined to have those shoes.  Even if they are a thrift-shop pair that is much too small. But sore feet aren’t much fun. Jeremy soon sees that the things he has — warm boots, a loving grandma, and the chance to help a friend — are worth more than the things he wants. 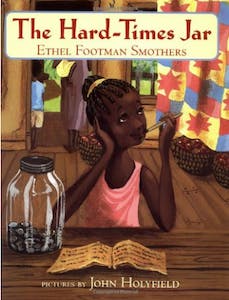 Emma Turner loves books and dreams of one day having the store-bought kind, but the Turners are migrant workers and money is tight. That means “no extras,” so Emma must be content to make her own stories and books. Emma has a plan, though – she’s going to save all the money she earns picking apples and put it in Mama’s hard-times jar. Then there will surely be enough for extras. But when Mama tells Emma that this year she has to go to school instead of to work, it spoils everything. Now she will never own a store-bought book! But school turns out to have a wonderful surprise in store for Emma.

Based on Ethel Footman Smothers’s childhood, the story is brought to life with lush acrylic paintings, giving us a touching portrait of a book-hungry child. 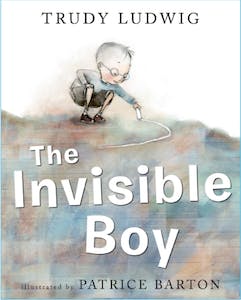 Meet Brian, the invisible boy. Nobody ever seems to notice him or think to include him in their group, game, or birthday party . . . until that is, a new kid comes to class.

When Justin, the new boy, arrives, Brian is the first to make him feel welcome. And when Brian and Justin team up to work on a class project together, Brian finds a way to shine.

From esteemed author and speaker Trudy Ludwig and acclaimed illustrator Patrice Barton, this gentle story shows how small acts of kindness can help children feel included and allow them to flourish. Any parent, teacher, or counselor looking for material that sensitively addresses the needs of quieter children will find The Invisible Boy a valuable and important resource.

Includes backmatter with discussion questions and resources for further reading. 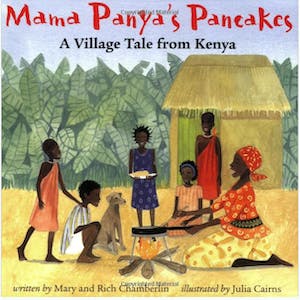 On market day, Mama Panya s son Adika invites everyone he sees to a pancake dinner. How will Mama Panya ever feed them all? This clever and heartwarming story about Kenyan village life teaches the importance of sharing, even when you have little to give.
If you’re looking for more ways to build empathy in your children, the FH gift catalog is a great way to practice compassion as a family.