August 9 is International Day of the World’s Indigenous Peoples. This day recognizes indigenous populations as some of the world’s most disadvantaged and vulnerable people.

Although there is no official definition for indigenous peoples, they can include native peoples, ethnic tribes, and clans. They tend to have a marked culture, language, and way of life that sets them apart.

Where do indigenous people live?

The UN estimates that there are are 370 million indigenous people worldwide, living across 90 countries.

In the United States, the Native American population comprises close to 2 percent of the national headcount. But in many countries where FH works, the presence of multiple ethnic groups is a much bigger percentage. In fact, the countries with the largest percentage of indigenous populations include:

What rights do indigenous people have?

Although they make up roughly 4.5 percent of the global population, indigenous people account for approximately 10 percent of the poor, according to the World Bank. For centuries, they have “sought recognition of their identities, a way of life and their right to traditional lands, territories and natural resources,” according to the UN. Most recently, the UN adopted the Declaration on the Rights of Indigenous Peoples in September 2007. Today, it is the most comprehensive document arguing for their specific human rights standards and freedoms.

On paper, this is an important framework for recognizing this group’s unique disadvantages. Even in the 21st century, clashes between neighboring rival tribes cause violence and political instability. In countries like Ethiopia, 80 different ethnic groups are represented. That means 80 different languages. As a result of this context with disparate cultures, a simple lack of communication can lead to serious rifts. While this Tower of Babel reality carries a beautiful diversity of languages, it also presents a significant barrier to intercultural dialogue. In fact, knowledge of these cultures’ 7000 unique languages is decreasing at an alarming rate. As a result, the UN has declared 2019 as the International Year of Indigenous Languages, as a vessel to promote peacebuilding, education, and sustainable development. 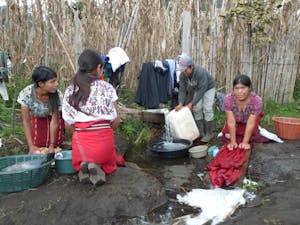 How does Food for the Hungry help?

Reconciling relationships is at the heart of the Gospel, and that includes between different ethnic groups. Through your support, here are just three countries where FH is working to help indigenous groups:

Today, let’s celebrate the diversity of indigenous peoples around the world, support indigenous artisans through platforms like Global Good Partners, and continue to go the great lengths to fighting poverty in their hard contexts.