What is a family’s legacy? It’s the foundation on which future generations will build; the soil into which each child and grandchild will plant their dreams.

But tragically, for too many families around the world, extreme poverty is the legacy that has passed from parent to child as far back as anyone can remember. That was certainly true for 16-year-old Wessly and his large Nicaraguan family.

His parents Esperanza and Santos longed to give blessings to their 12 children. But they lacked even the most basic resources to ensure their survival. No matter how hard they worked or what they tried, there was never enough food on the table or money to pay for medicine, school supplies, or other necessities. For years they struggled and feared that, like them and their parents before them, Wessly and his siblings faced a future of poverty.

But today, those fears are in the past. With dedicated hard work, unwavering faith in God, and several amazing gifts from Food for the Hungry (FH), this determined household has reshaped their family’s legacy. 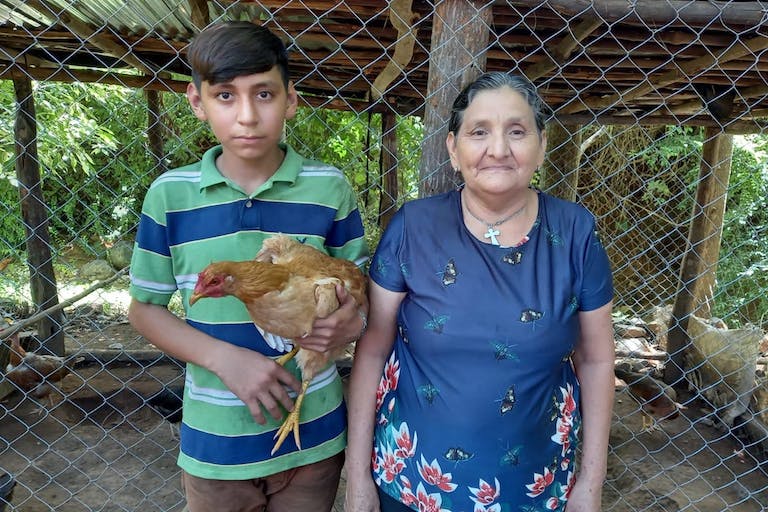 Wessly, a Food for the Hungry sponsored child, and his mother care for their chickens.

Before: A Family’s Legacy of Despair

As the youngest boy of 12 children, Wessly helplessly watched his parents and older siblings struggle to stretch their limited resources. He longed to be old enough to work and bring his family some relief. He could sense how the struggle for food and other necessities weighed on both of his parents, especially his father.

Santos, the father, ran himself ragged daily, desperate to provide a daily meal for his family. Yet, despite his efforts, hunger was their constant companion. Many times a single egg had to be split among three family members for their daily meal. There simply wasn’t enough money to buy an egg for each person. “It broke my soul,” Santos says.

Like his parents, Wessly worried most about his sister, Yumeylin. She had suffered with epilepsy for 12 years with no relief because her family didn’t have funds to buy the medication that could help her.

There were many days when the family felt completely alone in the world. They were among the poorest of the poor in their Nicaraguan village. In fact, the family’s circumstances looked so hopeless that some humanitarian organizations helping others in their community decided that they didn’t even qualify for help.

But that wasn’t the case when it comes to the compassionate supporters and child sponsors of Food for the Hungry (FH). 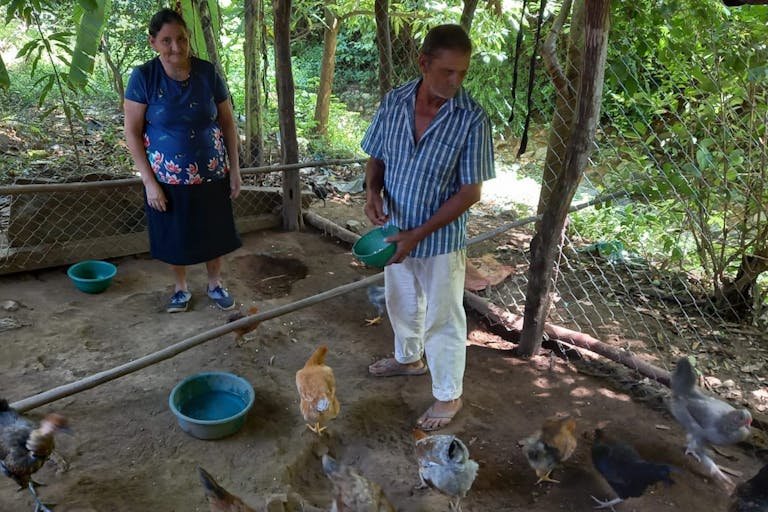 Wessly’s parents in their chicken coop, working hard to transform their family’s legacy.

Without question, faith is the most important poverty-fighting gift FH shares with children and families facing extreme poverty. Nothing brings hope more than tangibly experiencing Jesus’ love through the support of His people. That’s what happened for Wessly’s family when they learned that they can do all things through Christ’s strength (Philippians 4:12-13).

“We have received help and training with a biblical worldview,” Santos explains. “We are still fighting, and this is not over. But we are working to get out of extreme poverty, and we will achieve this with God’s help.

“Now I realize that we are children of God, and that he watches over His children.”

In addition to spiritual development, the family received training and gifts from FH that will help them escape poverty and transform their family’s legacy.

First, Wessly became an FH sponsored child. Through the faithful generosity of his sponsor, Wessly’s entire household received food, clean water, and the supplies Wessly needed to attend school and complete his education.

His family is learning, too. Wessly’s parents joined an FH food-security program where they received agricultural training and a gift of laying hens. Santos participated in additional training that helped him produce better quality grains and increase his production, so there is now plenty for his family to eat – and a surplus to sell at the market.

By God’s grace, the chronic food insecurity this family once faced is now a thing of the past. In fact, with their chickens now laying at least eight eggs a day, they have plenty of protein for their household and enough extra food to share with others in need.

What’s more, they’re confident and filled with hope for the future. Together with God and the generous FH supporters who are walking with them, there’s no doubt in anyone’s mind that they will escape poverty and create a new family legacy of success and faith to pass down to future generations.

“Today, everything is different,” Esperanza says.

Santos readily agrees, adding, “Our greatest hope is to see total healing in our daughter, and to see our son Wessly graduate as an auto mechanic. We are supporting him in whatever he needs so that he can fulfill his dreams.”

Santos adds that the teaching and regular visits from FH facilitators have been invaluable. “It has have given added value to our lives. Now we understand that God is above all things, and we depend on Him. We are stewards and ambassadors of His Kingdom. Being able to take care of our children is a blessing from the Most High.” 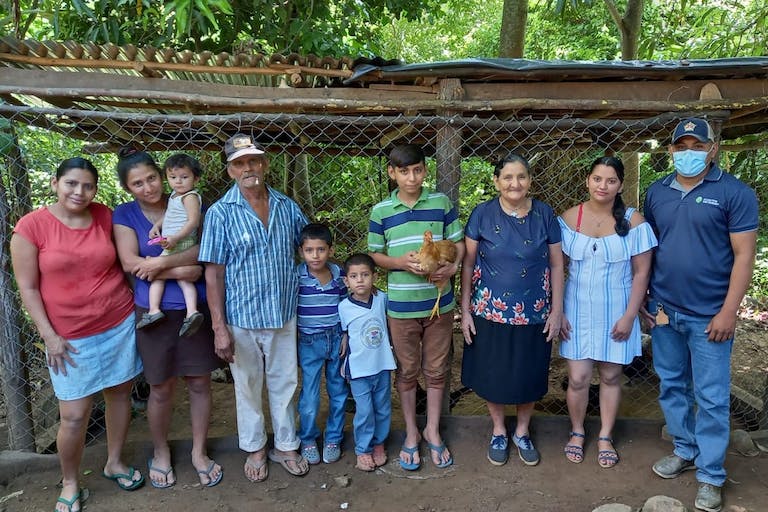 Wessly’s family is now full of hope for the future.

Single Mother Dreams Even Bigger for Her Future

A Family’s Future Changed with Water