Bee The Hope In Someone's Christmas

One of my favorite hobbies is beekeeping. Though I don’t do it often, I volunteer at a local garden in downtown Phoenix, helping with their bee hive. It’s such a fascinating experience to be up close and personal with an animal that might normally put my nerves on edge. Not to mention, the reward of having my own honey in my kitchen. 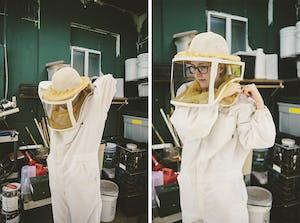 Me getting my beekeeping suit on before getting into the bee hive. Photo by: McKinley Co.

For people in other parts of the world, beekeeping means so much more than fun. For some people, like Norlan Amador in Nicaragua, it can mean getting to send their children to school, putting food on the table.

Norlan a is 34-year-old farmer, who along with his father, is dedicated to planting corn and sesame seeds as a means of sustenance for his family. However, last year, a drought prevented him from generating sufficient income and food for his family. To make matters worse, he could not afford school expenses or footwear for his daughter, Genesis.

This is no longer the case, thanks to the Food for the Hungry beekeeping group. FH staff trained Norlan and the other members on proper honey harvesting techniques, allowing for them to generate new income. 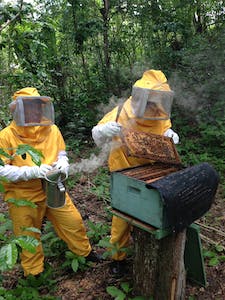 Norlan’s beekeeping group produces 320 liters of honey per cycle, amounting to nearly $1500 in sales at the local market, which is distributed evenly between all the members of the group.

After joining the group earlier this year, things have changed drastically for Norlan and his family. Now, he receives enough not only to pay for food, but also to pay for Genesis’ school supplies, uniforms and shoes. He can even help cover his niece’s school expenses. Additionally, he reinvests part of his new income in the apiary to help continue honey production.

The group as a whole is also able to help the school. The group took honey and bread to the school to help the children who receive school meals. Genesis says it makes her happy to hear her classmates say, “Your dad came by to hand out bread with honey to the school; he is such a good man.”

Norlan doesn’t see things that way though, he gives all the glory to God for connecting him to this program through FH.

You can help families like Norlan receive benefits from this program as well by purchasing beekeeping tools for only $28 from our gift catalog. What could be a sweeter Christmas gift than that?