Meet Anitha. She is a 12-year-old girl in Burundi, a tiny, landlocked country right underneath Rwanda where 65% of the population uses water that isn’t safe for drinking. Like so many other farming families, Anitha’s lives in a rural community. With limited access to clean water, people in their community could walk more than a mile round trip to collect water, with an entire hour just spent waiting their turn at the busy water collection point. 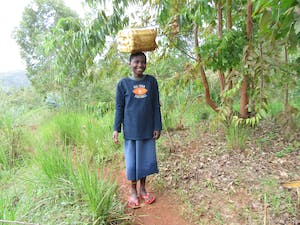 Lack of access to clean water caused a host of problems. Children like Anitha suffered from waterborne illnesses, families had to spend much of their limited income on water treatment fees, and the health of the whole community suffered. Children sent to collect water lost time that could have been spent studying for school, playing with friends, or helping their parents. Vulnerable families like Anitha’s struggled the most with the health effects of not being able to drink clean water or wash their hands. But there is hope.

Living in a small community in the Gatongati area of Burundi, Anitha’s parents are farmers who work the land to support Anitha and her four brothers and sisters. For years, the family worked the land, watering, tilling the soil, planting, and harvesting. But despite their hard work, the soil depleted of nutrients limited their ability to cultivate a good harvest. Richer families might have a goat or a cow to produce manure that could restore essential nutrients to the farmland. Without this, limited harvests meant the families without animals barely scraped by.

Despite this, like any parents, Anitha’s mother, Floride, and her father, Simon, always did their best to care for the children. They supported their education and took them to doctors when the children became ill. But despite this, drinking unclean water from a broken-down collection point meant that the family spent much of their money treating the symptoms of illnesses that could be avoided if they had access to clean drinking water. And this had a rippling impact. Anitha, who was often sick, missed school.

Food for the Hungry (FH) staff in Burundi asked Anitha’s mother to describe her life. She explained how before, she often took her children to the health clinic, spending money that the family could have otherwise spent on school materials or saved for the future. But even though they spent so much money on medicine, lack of access to clean water made her children sick. And such frequent illness and school absences meant that Anitha and her siblings struggled to keep up with their education.

But Anitha’s parents were not content for life to stay like this. First, Anitha’s mother joined an FH agriculture training that showed her that despite her small plot of land, she could increase production by using innovative farming techniques that conserved land, water, and restored nutrients to the soil. As she began implementing these new methods, FH staff could see that she was serious about growing her knowledge and skills as a farmer. With the addition of quality vegetable seeds and a goat to provide manure, the family began cultivating produce that would eventually bring a much greater harvest than ever before. Today, after several seasons of planting and harvesting, one of their neighbors told FH staff:

“When we harvest our crops, we sell one part to buy the foods we don’t produce and any other things we need, and we keep the rest to eat. I don’t struggle anymore to pay my children’s school fees, medical expenses, or our other household needs.”

But the biggest change came with the updating of the water point. With modern water technology and a reliable source of clean water, the community no longer suffers the bad health effects of not having clean drinking water or being able to clean their homes or wash their hands.

For a farming family like Anitha’s, a change like this impacts every part of life. They can access more food, including fruits and vegetables. This has allowed the family to achieve a balanced diet that reaches across food groups. The additional income from selling their harvest means that the six children go to school with supplies to complete assignments. They wear clothes and shoes that equip them to succeed. Their full stomachs allow them to focus throughout the day. Their parents have hope for the future.

And with the additional water point, the whole family is healthier and participates in all of the community activities. They can fill a twenty-liter jerrycan of water in less than a minute! Instead of visiting the health center every week, Anitha and her siblings stay in school. They spend their spare time helping their parents or with friends.

This has caused Anitha and her parents to dream about the future. Anitha’s father, Simon, told FH staff, “I hope for a brighter future for my family. Someday, I want my children to be educated so that they can have a nice life.”

Since 2006, FH has walked alongside communities in Burundi to respond to human suffering and help people rise out of poverty. In 2019, FH Burundi reached more than 340,000 people like Anitha through work in areas like agriculture, health, water, and livelihoods. You can be part of this transformation when you give to Food for the Hungry’s work in countries like Burundi today!

Hope is Buzzing Louder Than Ever and Transforming Lives