Through Child Sponsorship, this Craftsman Helps A Community

Bruce Jackson’s hobby is woodturning, but his passion is child sponsorship.

“I wouldn’t say I’m a woodworker. I’m a woodturner, and I’m pretty good at that – but I’m not a salesman,” explains the craftsman who lives in Hillsborough, Oregon, west of Portland.

“So I have bowls and plates and other wood creations all over the place around here,” he added.

When people see his work, they often are interested in buying one or more pieces. So he tells them to take the item(s) and, in turn, to make a donation to the Food for the Hungry (FH) child sponsorship fund in Guatemala. He provides them with a pamphlet so they can learn about child sponsorship and the education program there that he so actively supports. It also includes instructions on sending a donation.

“It’s up to them how much to give. It’s kind of like the honor system. Whatever they give goes so much further there than it can here,” says Bruce.

First, He Helped One Child 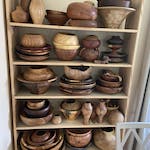 Bruce Jackson’s woodworking has become a way to introduce people to FH’s work in Guatemala — and around the world.

Bruce first learned about the child sponsorship needs in Guatemala a number of years ago when FH’s Amalia Toc came to Evergreen Church in Oregon, where he attends. She talked about the FH education program in the community of Chacalte, which is in the department of Quiche. Departments, he explained, are similar to what we call counties in many U.S. states.

“The schools in these villages in Guatemala only go through 8th grade. The kids don’t have transportation or any way to get to the cities where they could continue their education after that.

“The child sponsorship program pays for them to go to the higher-level schools, covers the tuition, supplies, and their expenses for living where the school is located. Getting an education is necessary to lift them out of their circumstances. They are very poor,” says Bruce.

After hearing about the program, many people at the church decided to participate in FH child sponsorship in the Guatemalan community.

Bruce now personally has four sponsored children. He is very involved, writes to them throughout the year, and follows all the communications sent to him by FH.

Several years ago Bruce took the next step and traveled to Guatemala with others from his church to meet their sponsored children. It was a wonderful experience, he says.

He has now visited Chicalte four times. The trips were in conjunction with FH and the child sponsorship program.

“We’ve installed a water system and a wood stove and completed other projects to improve the living situation of the whole community,” he explains.

“It is especially satisfying to give to child sponsorship and help people that I now know,” he adds.

Four Global Issues to Pray For in 2021