Water: I Saw A Story of Change in the Dominican Republic

Written by Carrie Woodward
What is new, blue, and changing the lives of thousands of people in a community in the Dominican Republic? Water.
A tiny building on the side of a dirt road in a place called Camarón.
I learned all about the change from a lady named Virginia. 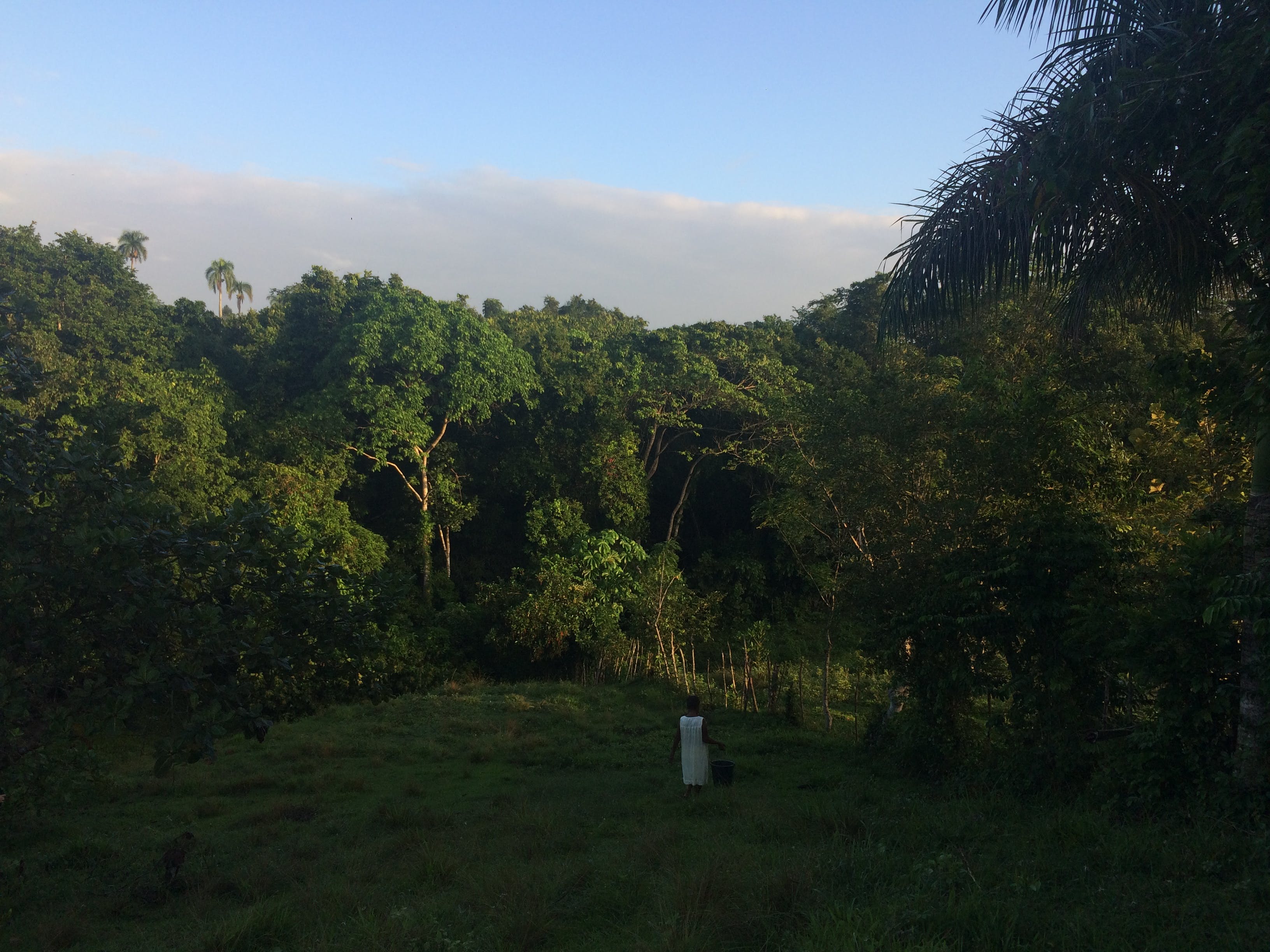 Virginia crossing a field with the bucket she used to collect water.

Virginia is a mother, grandmother, and great-grandmother. She lives in a rural area just outside of Santo Domingo, the capital city of the Dominican Republic. I visited her with local Food for the Hungry (FH) staff. She served us small cups of ginger coffee on the front porch of her turquoise-painted house. I sipped mine from a rocking chair and watched the morning light break across the dewy grass, her neighbors’ houses, and hilly farmland. At 8 in the morning, residents of Camarón hung laundry out to dry, swept their kitchen floors clean, and cooked food. Steps beyond Virginia’s house, a young mother held her 17-day-old son up to gentle beams of early sunlight.
Generations of Virginia’s family live together in Camarón. Her age gives her perspective on the community’s story. In the Dominican Republic, a lot is changing. In just the past few years, the country has recently made important progress in statistics like the infant mortality rate. Between 2012 and 2016, Dominicans living in poverty fell from 42.2% to 30.5%. Still, the areas where FH works still suffer without the basics needed to sustain life. When FH entered Camarón several years ago, it was one of those places.

Like most women I know around the world, Virginia starts her day with a to-do list of household chores. She cooks meals, cleans her home, and washes laundry. But every day’s first priority is water. For years, Virginia started her morning with a long trek up and down steep hills. Even as an elderly woman battling cancer, she lugged heavy buckets home from a source far away. And if she arrived early enough, she might haul a full bucket back to her home. Other days, there wouldn’t be enough for all the families in Camarón. Neighbors competed for the available resource, which caused tension and conflict between households. Even once collected, it wasn’t clean for drinking. Bottled water was an expensive alternative. Sometimes the price jumped up with increased demand, putting financial pressure on Virginia’s family.

What does it take to escape a constant struggle for a life-giving necessity?

When FH entered Camarón, community leaders named water as a priority issue for their community. They had a desire and will to enact a change. Then, because of donations through Food for the Hungry initiatives like Striking Out Poverty, FH provided technical guidance and basic building materials. The goal was to first get piped water to every home in a community of rolling hills and distant houses.
The community labored for weeks to build a concrete water capture tank. The men lifted rocks and dug trenches for pipes. The women coordinated their resources and schedules to cook enough food to feed the men. And with a little bit of help from FH, the community was able to lead the process of creating a new collective story.
Even with access to running water, water-borne diseases and parasites causing diarrheal disease are a major cause of sickness in communities like Camarón. Imagine giving water to your thirsty child, knowing that it might make your baby sick. Without another alternative, parents are faced with an impossible choice.

Why A Tiny Blue Building Is So Important

It’s a few hundred feet away from Virginia’s home. The words “Sistema Purificador de Agua” are painted across the top in bright red. The tiny blue building is a water purification system and it transforms the newly-piped water into clean, drinkable water. The piping and purification systems change everything use in Camarón. Today, women like Virginia no longer have to hike to collect water, but they also know that the water they have is good. It’s clean. It won’t give their babies white, patchy skin or diarrhea. Water scarcity used to create conflict between neighbors. Now the community sees daily evidence of what they can do by working together. Virginia says that the system is a frequent reminder that Camarón can accomplish even more in the future. 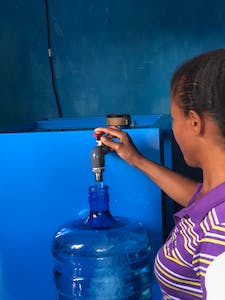 Lucinda demonstrates how to fill a bottle from a purification facility.

Lucinda is a relative of Virginia’s and the community member with the job of facilitating water system use. She told me that instead of waking up at 5 a.m. to get water, she spends the time with her grandson and helps him prepare for school. Now, when Virginia’s family sits together on her front porch, a little one guzzles water from a cup. When she finishes it all, she immediately holds the cup out and pleads for more. Virginia and Lucinda laugh. “She can never get enough water,” they laugh. “She loves it. She’s always thirsty.” And now they can always give her exactly as much as she wants.