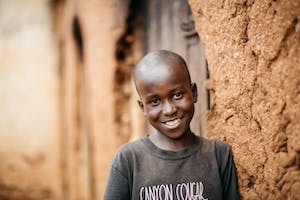 Dodos is an 11-year-old boy in Burundi who loves school and playing with his sisters.

In the community of Kiyonza, in Burundi, an 11-year-old boy named Dodos lives with his mother, father, and five sisters. They are a vibrant family. Dodos loves to run, laugh, and play with his sisters. The children are healthy and strong. They attend school regularly. And Dodos’ parents are saving their money and continuously learning new skills to support their family and keep their children healthy.

But Dodos’ mother, Gaudence, remembers a time when it wasn’t like this. Today, the family has a handwashing station and toilet outside their home, a kitchen garden for growing nutritious vegetables, and a savings strategy. However, just a few years ago, life looked radically different for the family.

Before Clean Water and Deworming Tablets

Imagine not having access to clean drinking water. Dodos and his sisters didn’t. Instead, they drank water out of a lake. Their health suffered because they didn’t wash their hands after using the bathroom and their family didn’t always have good food and vegetables to eat. Dodos in particular used to suffer from painful symptoms like diarrhea, vomiting, fever, and stomach aches. The family suspected that these symptoms were the result of intestinal worms and not having access to clean water. But because the family was barely scraping by financially, Dodos’ parents could afford to take him to get medical care.

Dodos was so often sick that he had to stay home from school. He missed out on education and being able to play outside with his friends and siblings because he was suffering from some of the same illnesses that impact hundreds of millions of people every year and are leading causes of malnutrition and even death among young children. 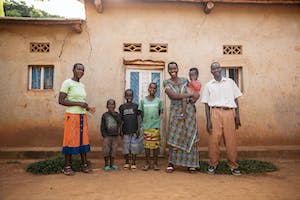 Dodos and his family.

In 2015, Dodos’ family began participating in Food for the Hungry (FH) activities in their community. Through a strategy called “Cascade Groups,” several local leaders learned important lessons about health, hygiene, and livelihoods. Those leaders shared those messages throughout the community in small groups of neighbors. This created a “cascade” effect, as more and more people in the community learned about how they could protect themselves and their children from getting sick.

And Dodos’ parents not only learned behaviors like good handwashing and the importance of drinking only clean water, but FH helped families like theirs get access to clean water sources. Through partnership with the Burundi Ministry of Health, Dodos and his sisters also received a medicine called albendazole, which eradicate the intestinal worms that contributed to Dodos being sick and kept him out of school. Together, the behavior change and simple medical treatment created potential for long-term change! Today, Dodos and his sisters attend school regularly, and the entire family is working toward a bright future.

Watch Dodos share his story in his own words below!

Want to help more children recover their health like Dodos did? Give deworming tablets so that children like Dodos can be free from intestinal worms.