Have you ever spoken confidently about God’s power to rescue in a situation, but secretly wondered if He really would?

Dr. Larry Ward, who founded Food for the Hungry (FH) 50 years ago, trusted God for great things. However, sometimes God didn’t respond in the way Dr. Ward expected. Today, we’ll look at two stories that show how God surprised people with His answers. One of these stories comes from a present-day staff member, Raquel Munoz. But first, let’s start with a story from Dr. Ward and the Scripture verse that inspired his confidence in God’s provision.

Oh, how great is your goodness to those who publicly declare that you will rescue them.

Dr. Ward’s flight that day was piloted by his friend, Hank, who was an atheist. As Dr. Ward read the words of Psalm 31:19 to himself, he remembered what he had told Hank before the plane took off. 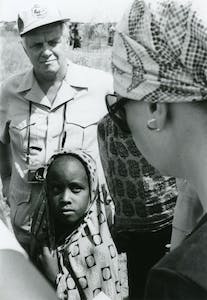 Dr. Ward discovered a tremendous need for aid during a trip to Africa.

Sure enough, God gave favor to Dr. Ward and his companions throughout the trip. They saw tremendous needs for relief at each stop, but particularly in the small West African country of Mauritania. God’s provision was obvious – until they missed a connecting flight home in Paris. Missing that flight meant a delay of several days, forfeiting opportunities to advocate for the needs of people they had just witnessed.

Dr. Ward remembered how he had confidently proclaimed the Lord’s timing to his friend Hank. Now he wondered what God was up to, stranding them in Paris.

Moments later, Dr. Ward’s group boarded a nearly empty bus with just one other rider, a man who struck up a conversation with them. When Dr. Ward told the man that they had just come from Mauritania, the man smiled.

“Then you must be Dr. Larry Ward of Food for the Hungry!” the man said. “I missed you in my country and wondered as I flew here today how I could contact you. I’m the Ambassador of Mauritania to the United States. I have wanted to talk to you about the needs of my country and how you can help.”

As a result of this chance meeting, made possible by a missed international flight, doors opened for much-needed help to be delivered to Mauritania. Dr. Ward realized that God had shown Himself true to the promise of Psalm 31:19. He knew exactly where they needed to be, and God had shown His great goodness as a result of Dr. Ward’s public proclamation of God’s rescue.

An Appeal for Rescue

Today, God is still showing His goodness to those who declare their confidence in Him.

Raquel Muñoz has been on FH staff for 24 years in her home country of the Dominican Republic. As Director of Field Sponsorship Services, she serves many countries where children are sponsored through FH. 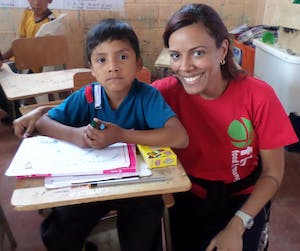 Raquel Muñoz has served with FH for 24 years.

Raquel has seen God’s power to rescue many times through the years. A recent experience with a dear friend’s daughter was especially powerful for her.

“My friend’s daughter went through a somewhat risky pregnancy,” Raquel explained. “Right after the delivery, she suffered a series of health complications that kept her in the hospital.”

Raquel joined hundreds of people in prayer for this young mother.

“The immediate prayer was for her to be healed and reunited with her baby, her other two children, and her family,” she said.

Everyone believed their prayers were being answered as they saw an improvement in her condition. However, shortly before release from the hospital, she took a turn for the worse and died.

Raquel and everyone around had publicly declared God’s rescue. When  the young woman passed away, had He declined to show His goodness? No, said Raquel. God was answering their prayers, she said, just not in the way they had expected.

“While the miracle we expected was healing and for this person to live, our prayer turned to a miracle of comfort and hope for this family who faced such a terrible loss. The miracle came faster than I could have expected.”

“As the days go by and I see how God has comforted this family in their loss and provided for the children, I am impressed and overwhelmed about God’s ways. He listens to our prayers and comes to rescue us despite ourselves and our selfish motives. By looking at this family recovering and moving ahead by faith, knowing their dear one is with Christ, my heart is comforted and my faith has been strengthened.”

What need are you trusting God for today? Know that He promises to show His goodness as you confidently and publicly proclaim your trust in Him!

Other Blog Posts in This Series:

What is the Meaning of “God Gives Food to the Hungry?”

What is the Meaning of “Ends of the Earth?”