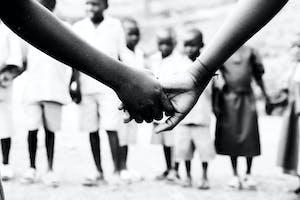 It was 50 years ago today that Martin Luther King Jr. stood on the steps of the Lincoln Memorial in Washington, D.C., and powerfully described his dream for a more just and equal society.

“And so even though we face the difficulties of today and tomorrow, I still have a dream. It is a dream deeply rooted in the American dream.

I have a dream that one day this nation will rise up and live out the true meaning of its creed: ‘We hold these truths to be self-evident, that all men are created equal.’”

Making the dream a reality

Since that day, the United States has made progress on racial relationships and justice—yet, we still have not fully realized Dr. King’s dream. We can only continue to make progress, if we courageously face issues of racial injustice. The harder we work for equality, the sooner we will see the fruits of our efforts.

Food for the Hungry (FH) has a bold dream as well—and one that also requires a great deal of effort:  that physical and spiritual poverty would be ended worldwide. We’ve made a lot of progress toward this dream, but there is a continued urgency to address the brokenness caused by poverty.

As Dr. King said about the importance of now in his Lincoln Memorial speech:

“We have also come to this hallowed spot to remind America of the fierce urgency of Now. This is no time to engage in the luxury of cooling off or to take the tranquilizing drug of gradualism…Now is the time to make justice a reality for all of God’s children.”

Being bold and taking action

Having big dreams takes boldness. Articulating a vision for change takes courage—for once we cast that vision, we must act to make it a reality. The vision of living in a world where no child is hungry, where everyone has clean water to drink, where everyone is healthy and educated—it can seem overwhelming.

But facts show us that we are making progress…between 2005 to 2010, nearly half a billion people are no longer living in extreme poverty worldwide. Poverty is decreasing in our world. But we still have not fully realized the dream.  But as Dr. King said 50 years ago, “Know that somehow this situation can be, will be changed.”

Join FH in dreaming big and become part of ending global poverty. With God’s help we can do it.