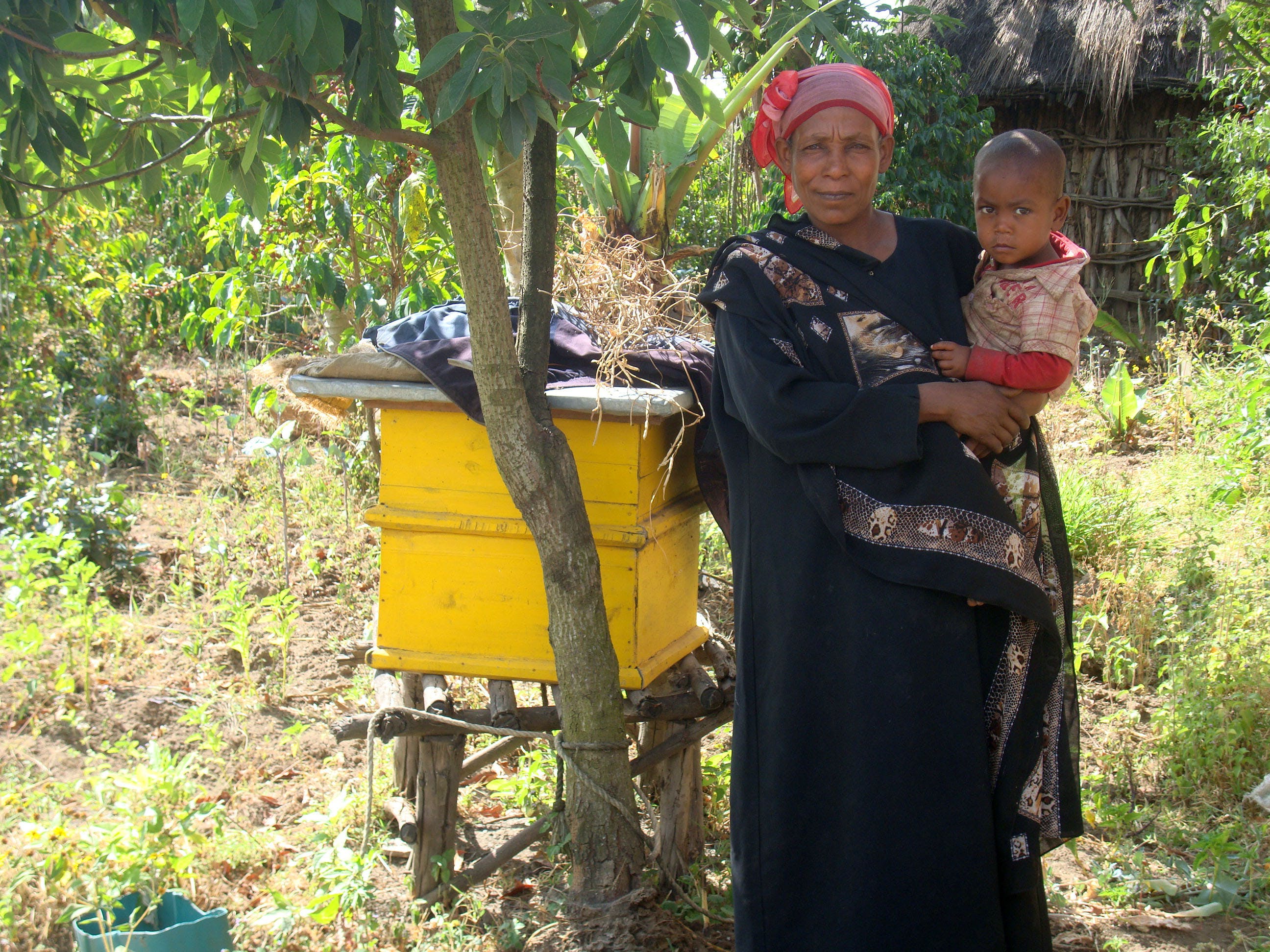 I have cursed at bees.

I know we are supposed to love all of God’s creation. But when they swarm on my patio and sting my bare feet, I am not happy with them. There are some people in Ethiopia, however, who are very fond of bees. The bees help feed their children.

One such Ethiopian is Murshida, who was the picture of desperation. She is a single mom with eight children. She tried desperately to feed her family with her small farm plot. The family relies heavily on navy beans (or haricot beans, as they’re called in Ethiopia) for their daily protein.

Murshida didn’t have any oxen to plow her land and the soil is too hard to plow by hand. She rented her entire plot to others and shared a small section with someone with an oxen. When Murshida did plant her plot, the local navy bean seeds produced poor harvests. She and her children lost access to food.

FH offered Murshida high-producing bean seeds and taught her some new farming techniques. But FH also provided her with another important tool – beehives.

More than double the money for honey

Beekeeping (or apiculture) is an ancient art. Ethiopians have known how to raise bees and extract honey – 14 percent of the families in Murshida’s area were producing honey before FH started working with them. But with FH’s help, Murshida and others got modern hives and tools for extracting and processing the honey and beeswax. FH educated them on techniques for increasing the amount of honey produced and refining it free of wax and debris. Now, 30 percent of the families are raising bees in the communities near Murshida.

Before FH’s assistance, farmers in this part of Ethiopia were selling a kilo of honey for about $2.40. After receiving the processing tools, they produced better quality honey and were able to earn up to $6.30 per kilo. That’s over one and a half times the price — more money for the farmers to buy food for little ones and spend money on farm improvements.

Throwing off the chains of anxiety

For Murshida, the combination of better beans and beehives has been life-changing. She can’t raise her children on the honey alone, but the income from the bees helps her feed her kids. “I got the key to unlock the spiraling chain of a disgusting life of anxiety,” she says.

Due in part to her honey and beeswax income, she was able to buy an ox for plowing and a donkey for carrying produce to market.“I feel confident and have the courage not to give in to any despairing situation,” Murshida said.

Murshida’s story is just one example of how very simple techniques and tools can multiply a family’s income. You can help families like Murshida’s by giving to FH’s beekeeping projects and make their life sweeter in so many ways.