Imagine that the greatest wish you could hope for your children was for them to live to adulthood. That was the case for a woman from Nyalugano, Democratic Republic of the Congo (DRC). We’ll call her Ruth.

The problem was that people in Nyalugano could only farm on rocky mountainsides. When it rained, water washed away topsoil and vital nutrients.

Equally bad was that the water created a 2,258-acre marsh in the valley below the mountains. On Ruth’s side of the marsh, there was no school, no hospital, and not enough food. No one could produce food in the marsh, and Ruth’s children couldn’t walk around it to go to school.

Ruth and others in her community said that they thought their children would starve to death.

“Crops mean life,” Ruth says. “Not having a place to plow means you will not have food.” Adding to Ruth’s anguish, she knew that even if her children lived to adulthood, they would endure a generational cycle of excruciating poverty.

And then Food for the Hungry (FH) arrived. 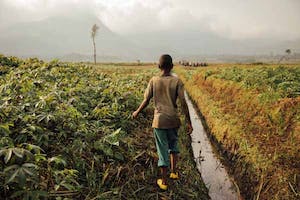 With a grant from the United States Agency for International Development (USAID), FH installed a drainage system in the marshy valley. As the water disappeared, it uncovered 2,258 acres of fertile soil. FH was able to provide farmland land for 13,000 families.

Members of the community received food or cash payments in exchange for their labor to create the drainage system, which would include activities like digging, collecting rocks for building dams, and planting tree seedlings to protect against erosion.

Now farmers like Ruth are planting in soil that produces more and healthier harvests. Traders now come to the area to buy the improved produce. This has created a growing economy in which farmers like Ruth can feed their children and sell the surplus.

With the marsh drained, Ruth’s children can now walk to school. Additional income from produce and the goat that FH gave Ruth yields enough income to pay school fees. Not only can Ruth’s children live to adulthood, they can get the education that can help them overcome crushing poverty!

But FH didn’t stop there. Studies have shown that gender inequality is a driver of malnutrition. FH started gender discussion groups in Nyalugano. Using a skit, FH teaches how the community benefits from treating women fairly and with respect.

There is also more security in the area, which was home to many ex-combatants. Ruth and others feared they would fall victim to the former soldiers when harvests were too lean to produce enough food. Now, the soldiers embrace peace. They traded their guns for farming tools. Because of the drainage project, they earn a living in a positive way, and villagers feel more secure.

There’s so much impact you can have in places like DRC. Relatively simple improvements create a huge impact on people’s lives.

Your generous gift can help mothers like Ruth the world over.

For as little as $29, you can provide vegetable seeds to a needy family. In some cases, desperate farmers like Ruth must choose between eating nothing and eating their seeds. When they choose the latter, they have nothing to plant for the next growing season, putting their families at risk of malnutrition or worse.

For only $27, you can give mothers like Ruth the farm tools they need to grow their food. These may include items such as a hoe, a shovel, a machete, pruners, garden trowels, garden gloves, sickles, and watering cans. When a farming family has quality tools, they can effectively take care of their crops, resulting in a better harvest, improved nutrition, and a higher income.

$65 buys a family a goat. These animals can provide meat, dairy, and hides to vulnerable families. They also provide fertilizer for vegetable gardens, helping to fight malnutrition in children. Since goats can withstand harsh climates, reproduce easily, and don’t take up much room, they’re the perfect livestock gift. A goat is never a baaaaaad choice, to help a family increase their income!

Any amount can be multiplied by an astounding 22 times! Due to FH’s history of effective work, we’ve earned matching grants from the United States Agency for International Development (USAID) and other partners that multiply any gift you give by 22 times! These grants help FH reach some of the most difficult and remote places in the world.