Give a Goat to Tip the Dominoes of Poverty

If you watched PBS’s “The Vietnam War” like I did, you heard discussion of the Cold War’s Domino Theory. If South Vietnam fell to the Communists, the theory went, all of the countries in the surrounding region would also collapse into Communism, like standing dominoes stacked in a long string. And if Southeast Asia fell, other regions could also fall.

When I’ve met families working with Food for the Hungry (FH), I too have seen situations that reminded me of falling dominoes. But unlike the political theory, what falls one by one in FH communities are the barriers to better lives for children and their parents.

Just see, for example, the multiple barriers a goat toppled for one East African family:

Asterie and her husband Didace live in Gisuru, Burundi with their eight children — six boys and two girls. Asterie spent most of her life in such terrible poverty that she was ashamed to participate in community life. She felt sure that everyone in her community despised her.

Because family income was so low, Asterie didn’t have money for medical care, food or seeds for her farm. She was unable to send all of her children to school at the same time. She couldn’t see how this would ever change.

A Goat Tips the Dominoes

FH offered Asterie the opportunity to join a savings group, where she invested small sums weekly to a community bank. The bank then allowed her to take out loans. Asterie started selling staple groceries like cassava flour and beans in the market with her first loan. In a short time, her confidence rose in the process, and she decided to try raising goats. She bought two goats with a loan and quickly increased her herd to five by breeding them.

The goats gave Asterie great options as the poverty-dominoes continued to fall. By selling two goats, Asterie obtained cash to buy solar panels for her home. That means her house is lighted at night, providing a place for her children to study and improve performance in school. Because of Asterie’s improved income, all six of her school-aged children are now in class. 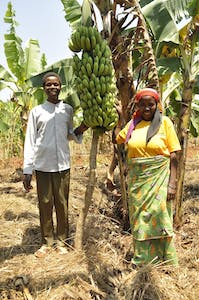 Asterie and her banana plants

Goats are also highly efficient manure factories. So Asterie and Didace bought and planted 102 banana trees, which the manure fertilizes. When the fruit matures, Asterie’s family can eat all the bananas they want and still sell the leftovers. Last year, combining all of the weeks that they had mature bananas to harvest, they earned 900,000 Burundian francs, or just over $500.

As a result of Asterie’s business success, the family was able to construct a new home with a metal roof, instead of thatch. The metal provides much better protection from the elements but also means there are fewer rodents and other disease-carrying critters living in the home. In part, Asterie’s training in the savings group included lessons on household cleanliness, and basic health and hygiene.

“I have received much training on savings and health,” says Asterie. “My family and I gained so much knowledge and experience. I am happy to see how my children are healthy and performing well at school.”

Underlying much of Asterie’s success is a broken barrier that’s more hidden. Asterie became a member of a strong community when she joined the savings group. The group gave her the confidence to try new risks and new ways of earning money.

“Being a member of a savings group strengthens unity and love among members. As a result, we support one another through family ceremonies or the hardships of life,” Asterie says. “Glory be to God Almighty, who sent FH in our community!”

You can help topple dominoes of poverty and self-doubt in the lives of more people like Asterie by giving a goat through the Food for the Hungry gift catalog.