This post is the seventh in a series on God’s Story, the Foundation for FH’s Work in Relief and Development. Follow the series, starting with the first post. You can read the next post in the series here. 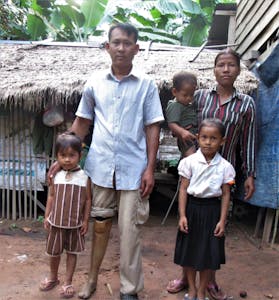 After stepping on a landmine and losing his leg, Yong went on to marry and have three children.

Yong has lived with a disability for nearly all of his adult life. At the age of 19, he stepped on a landmine and lost his right leg from the knee down. Losing a limb is a tragic event for anyone, but for a subsistence farmer in Cambodia, it could mean the loss of his livelihood, too.

After the accident, doctors fit Yong for a rudimentary prosthetic limb. He went on to get married and have three children, continuing as a farmer in his rural village. But his disability has always been in the way of making ends meet. He produced enough food to feed his family, but he lacked money for medical bills and school supplies for his children.

Many people who hear Yong’s story might think that the best way to help this family is to provide them with financial donations to cover the bills and help them survive. At Food for the Hungry (FH), we see things differently. Rather than solving problems based on meeting the need ourselves, we look to what Scripture says about Yong and every human being.

When God made Adam and Eve, He made them to look like Him! In Genesis, we learn that God made people in His own image. This is what the Bible tells us in the creation story:

Then God said, “Let us make mankind in our image, in our likeness, so that they may rule over the fish in the sea and the birds in the sky, over the livestock and all the wild animals, and over all the creatures that move along the ground.”

According to these verses, God made every person in His own image. This means that there are characteristics of God that are also true of people.

Theologian Wayne Grudem lists two types of attributes of God. Incommunicable attributes are qualities that belong only to God. For example, God is all-knowing, all-powerful, and unchanging.

Money and the Image of God

When FH began to work in Yong’s community, we discussed the strengths and needs of the community with the village leaders. We learned that banks and other lenders overlook subsistence farmers like Yong for loans because these farmers do not own land, which means they have no collateral. They can also be overlooked because they only need small loans–sometimes no more than $50. 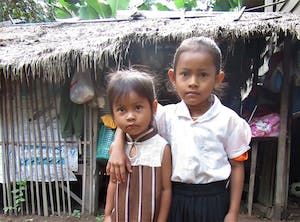 Yong’s children are growing with the knowledge that God made them in his image.

Recognizing that the villagers were made in God’s image, our staff knew that they were capable of creatively solving their own problems. They could think through their needs and envision the future, while acting in ways that are loving to their neighbors.

We introduced the idea of a savings group, which the community members enthusiastically adopted. Group members meet regularly to contribute a small amount of money, or in some cases, a staple crop such as rice that can be later exchanged for money. Once the group has enough saved to make a loan, they decide together who will receive the loan and what the repayment terms will be. They charge a small amount of interest, which is split between all members of the group.

Yong joined the savings group as soon as it started. Since then, he has already had the opportunity to take out small loans to pay for agricultural supplies and his children’s medical bills. He uses the interest from other group members’ loans to purchase school supplies for his children.

Yong’s story is an example of how God reveals His image in a person’s life. His poverty, landless status, and disability did not keep him bound. Instead, Yong used the innate attributes that God had given him in order to improve his family’s quality of life.

God Made You in His Image, Too

Consider a problem in your own life that seems insurmountable. Do you focus on your weaknesses, or have you thought about the attributes of God that He has imparted to you? Remember, God made you in His image. You look like your Father! Prayerfully read the list above, and ask Him what He wants you to see in yourself.