This post is the eighth in a series on God’s Story, the Foundation for FH’s Work in Relief and Development. Follow the series, starting with the first post. You can read the next post in the series here.

Cecilia, a 60-year-old grandmother in Uganda, knows hardship. After her husband was ambushed and killed in their home country of South Sudan, Cecilia fled with her adult daughter, son-in-law, and three grandchildren to Uganda.

In Uganda, Cecilia and her family had to start over. She had never farmed, but now found herself in a region where farming on borrowed land was her only chance at a livelihood. The future seemed bleak.

That’s when Cecilia learned that Food for the Hungry (FH) was working with refugees in her new community. She joined a farming project where FH staff members demonstrated sustainable farming practices with peanut crops.

Little by little, Cecilia’s new discoveries helped her to create a new life for herself and her family. Along the way, she discovered God’s plan for human flourishing. 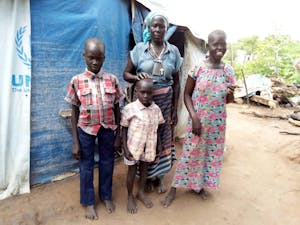 Cecilia, a 60-year-old South Sudanese refugee, poses with her three grandchildren in the new farming community in Uganda.

When we think of poverty, physical problems usually come to mind. We think of the lack of food, housing, work and money. These are all issues that stem back to the broken relationship between mankind and God’s Creation, as we discussed earlier in Ayesha’s story.

When God created the world, He called what He had made “very good” (Genesis 1:31). We know that since the Fall, mankind has had a broken relationship with God’s Creation, which has caused physical poverty in all of the ways it shows up around us.

But God’s Creation is still very good! He is in the process of reconciling all things to Himself through Jesus, and we as his His followers are ambassadors of this reconciliation.

How We Treat the Environment 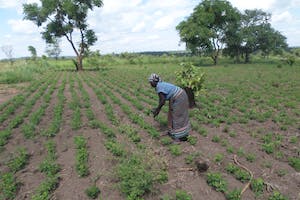 Cecilia tends to her farmland in northern Uganda with restorative agriculture practices.

Did God entrust the Earth to us so that we could take advantage of its resources, or so that we would take care of it? Genesis 2:15 has the answer: “The Lord God took the man and put him in the Garden of Eden to work it and take care of it.” (italics added) This dual responsibility, to utilize Creation while also caring for it, defines the word “stewardship.”

When Cecilia and her neighbors learn and use sustainable farming techniques, they are practicing stewardship. They are finding ways to meet their own needs through God’s Creation, while also renewing the land to be productive for generations to come. Like all of God’s teachings, stewardship results in the best possible outcomes for human flourishing. This is core to our work.

Scripture speaks often of peace, using the Hebrew term shalom. We often think of peace in relation to calm feelings or the lack of war. Shalom includes those things, but it goes much deeper.

According to Cornelius Plantinga, Jr., president of Calvin Theological Seminary (2002), “Shalom means universal flourishing, wholeness and delight. It is a rich state of affairs in which natural needs are satisfied and natural gifts fruitfully employed, all under the arch of God’s love.” Shalom represents wherever the Kingdom of God is coming.

Cecilia is also at peace with herself. Previously she thought that as an older woman, she could not be a leader or one who brings change. Now she says, “I realized that it is my role to be proactive and participate in community development and demonstrate hope and belief among the refugee community.”