Ildephonse tries to be a good neighbor, but he was frustrated. The 22-year-old married farmer was watching his crops wither for lack of irrigation. It was happening in his kitchen garden, adjacent to his home in Kala in the Democratic Republic of the Congo. There he grows a broad variety of crops to feed his household.

But the plants were dying even faster on the plot of land where he primarily raises onions and some garlic, which he then sells when the crops mature. It is his principal livelihood.

What was upsetting him most was that the plants were dying unnecessarily. Water was available, and he knew what was happening. His neighbor, Mapenzi, a 30-year-old married father of three, was diverting the water to his own land.

“My wife and I were in conflict with our neighbor,” explains Ildephonse. “He had clearly directed the irrigation water toward his own field while depriving me of it. But we had all worked to create this small irrigation canal, which was to serve all the nearby neighbors and provide water for our onion fields.

“I was not happy at all, and we got into a fight early that summer. If my crops died from lack of irrigation, we would suffer the loss for a full year”.

He says he stopped speaking to his neighbor, and his crops continued to wither.

It was June 2017. Ildephonse was not aware that Food for the Hungry (FH) was beginning a project to benefit vulnerable households in his area, in the provinces of South Kivu and Tanganyika. Called Tuendelee Pamoja II (“Moving Forward Together”), the USAID-funded project targeted irrigation and other agricultural needs specifically in his sector.

Ildephonse lives near the Kala river, which gives its name to his community in eastern DR Congo. It’s an area filled with flatlands dotted with marshes. The FH project is a major effort to use hydraulic systems to drain the previously unusable marshland. The reclaimed water is in turn used for irrigation, as part of the effort to modernize farming practices in the area.

A Play Plants the Seed

He learned of the project at an FH-lead community gathering. The main attraction of the evening was a skit, presented by actors from the Kala community. It was called, ”Conflict between farmers linked to the misuse of water from irrigation.”

Ildephonse, of course, immediately recognized his own situation in the skit. It ended with another member of the audience taking the floor to suggest a solution.

“We as good neighbors must use the (irrigation) water in small quantities and share it in turns, instead of fighting. Because everyone needs their field to produce,” said the other spectator.

Ildephonse said this proposed solution inspired him. “The next day, I went to my neighbor, Mapenzi, to make him understand how we should both use this water,” he said. “Fortunately, he agreed to my suggestion to take turns watering the plants in our fields.” 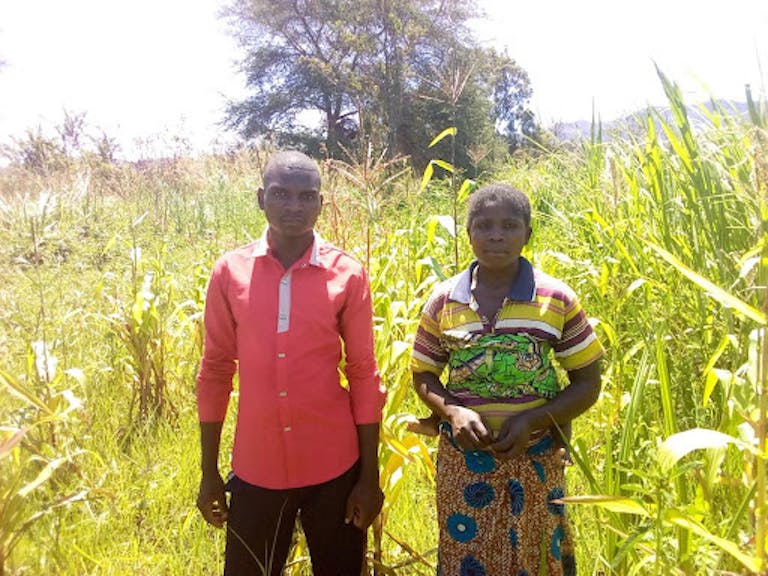 Illdephonse (left) stands in his field with the wife of his neighbor Mapenzi.

The conflict had lasted for more than two and a half years. But Ildephonse says he and Mapenzi have remained on good terms since adopting the solution. The FH project has increased the amount of available water, and the two good neighbors and others near them continue to share it harmoniously – and their fields have grown and flourished.

Ildephonse says he took the initiative to settle the dispute because the success of his crops was essential for the well-being of his family.

Teaching the Next Generation of Good Neighbors

But seeing their parents work to resolve conflict can be equally important to the well-being of children, Ildephonse and his wife now realize. Water conflicts can become so heated in communities like theirs that it has been known to lead to violence and even death.

Witnessing their parents work toward reconciliation provides a good example for children and teens. In addition to providing a more stable childhood, it prepares them for adulthood, when they will assume responsibility for water resources in their own communities.

Once he saw the results of the compromise, Ildephonse took the next step and volunteered to become a community volunteer. He now actively encourages members of his Kala community to peacefully resolve many types of problems. This has reduced fighting in the community and the number of conflicts that require intervention by local police.

How Irrigation Changed A Family’s Future