The lights are coming on—literally—in Bufukhula, Uganda. Peter Malikisi is the first dairy farmer in the community to be installing a bio-gas lighting and cooking system in his home.

Peter’s new electric lighting and cooking facilities are a result of the eco-friendly biogas system he constructed. Peter has become one of the area’s most successful farmers.

It all started with a cow from the FH Gift Catalog.

In 2011, Peter attended a dairy farming training session offered through the community veterinary office and FH. After showing promise at the session, Peter was asked to join a cow-sharing group and to house the group’s cow—a pregnant Ayrshire heifer—on his property.

“I reluctantly accepted the idea although I could not see immediate benefits. We were about 14 members to one cow!” he recalls. 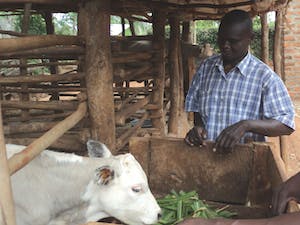 The cow calved at the beginning of 2012, and four members of the group received ownership of the calf, reducing the number of farmers benefitting from the heifer to 10. The cow has now calved a second time, and the group has split again, leaving each farmer with a larger share of the milk, market income, and manure. 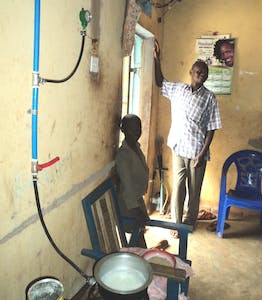 Peter shows how his gas system, connected to a stove, can be used for cooking or boiling water so it’s safer to drink.

“I have a garden full of green bananas because of the extra manure that I get from the cow,” says Peter. But that’s not nearly the extent of the bio-waste’s usefulness. Running a stove on biogas means, no burning trees for fuel. It means fewer girls and women risking rape or their lives to look for scarce kindling in places far from home. It means kids can study around the kitchen table at night to do better schoolwork and stay in school. And the whole family eats well and grows into the life God intended for them.

“Before FH came to our village, I used to think that rearing an exotic heifer was only for the rich. Never did I ever dream of owning one,” says Peter. “I certainly owe my thanks to FH for this brilliant idea!”

Today, Peter serves as a model farmer with FH. His property is used in demonstrations and trainings for the farmers of Bufukhula, and he visits others to help with their cow-sharing groups and farms.

Ideally, other farmers will be able to use bio-gas facilities to convert methane from their cow’s manure into a sustainable energy source. There are already 184 farming families sharing 39 cows in Bufukhula, with an average of five members per group. Each has improved their family income and nutrition since joining the project, and the next step could be self-supplied electricity.

Cost-effective cow sharing is proving to be a very bright idea for the Ugandan farmers.

Want to be part of providing a cow to a farmer in places like Uganda? Check out cows in the gift catalog today!