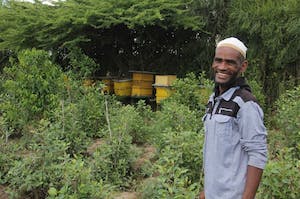 Sultan and his beehives.

Sultan Hassen was convinced that divorce was the only way to save his wife’s life. At age 24, he earned 62 cents a day to feed himself, his wife and four children in Wanji Village, Ethiopia.

“I had no special skills with any kind of handcrafts,” said Sultan. “Poverty crept into our house and eating once a day became rare. I could not tolerate the starvation and poverty any longer with a wife and three children. Finally, I asked my wife to divorce me and go to her parents at least to feed herself and the children, but she refused.”

Five years ago, Food for the Hungry (FH) started a project in Sultan’s village. The project trained farmers in a variety of agricultural projects so they could earn income. Sultan got training on modern beekeeping and learned to transfer bee colonies from traditional beehives to modern ones, queen rearing, building modern beehives and other skills.

After the training, Sultan received two modern beehives and haricot bean seeds from FH. Sultan started selling honey to his neighbors as well as residents of other villages. In one year, he earned $2,182, going from 62 cents a day to $6. 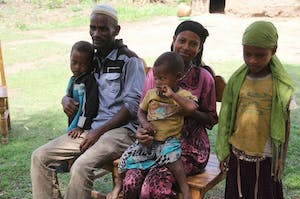 Sultan and his family.

“Thanks to God, my livelihood has been improving,” said Sultan. “Every year, my income is increasing, and I am able to provide nutritious and adequate food for my family. I am also able to send my children to school. My dream for my children is for them to get a better education and become medical doctors, engineers or some kind of professional.”

As his children pursue their education and now eat daily, their living situation has also improved. The family used to live in a small grass-roofed hut. Since he is making more income, Sultan built a bigger home with a roof made from an iron-sheet.

Even more exciting is that Sultan’s prosperity has allowed him to save money for medical emergencies and for projects. Now he has more than $1,000 cash in a local bank to serve as a cushion for hard times.

This is the kind of difference you are making when you partner with FH to help vulnerable families all over the world. Together, we are helping parents and children move up and out of poverty. This season, give the gift of beehives.