How a Mom Stopped Violence -- With Hugs

For Lita Trujillo, a mother in Peru, inherited family violence stretched back multiple generations. “My grandma punished my mother and her siblings in the mornings, while everybody slept. Grandma used to throw freezing water on them, then spank them with different things like leather belts and hard wooden sticks,” said Lita with sadness.

Lita’s mother, Higidia, did the same thing to Lita and her brothers and sisters. But what Lita remembered the most was, her mother never hugged her, and wouldn’t take a hug from anyone else.

In her community on the outskirts of Lima, Lita works with a government program helping moms and their preschool children. She spent so much time with her work, and with household chores, that there was no time left for her five-year-old son Miguel Angel. She was continuing down the same path as her mother and grandmother, unable to show her son the affection he needed.

Violence Ends with a Decision

Then Food for the Hungry (FH) started working in Lita’s community, due to help from child sponsorship donors. Their monthly donations help fund work in desperately poor communities. You might think that leaders would want help with building things. But community leaders told FH staff that family violence was their top problem. They pleaded with FH to help find solutions.

So FH designed parenting courses specifically for the Peruvian culture. And Lita was one of the first to sign up, to learn how to train her neighbors on parenting and violence prevention.

“When I started attending FH’s Parenting Guidelines training, I realized I could make the change in my family myself, to break the chain of abuse,” Lita said.

Hugs Instead of Hitting 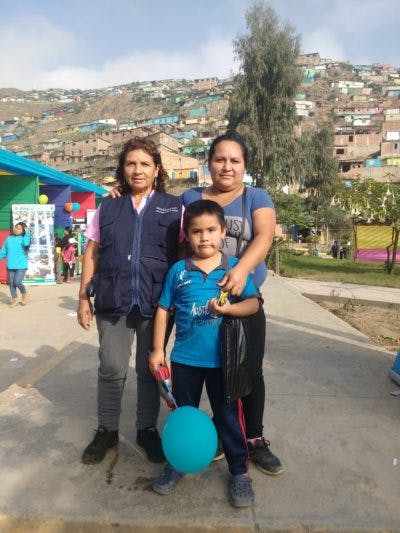 Lita (right) with her mother Higidia and her son Miguel Angel.

FH’s teachings, bolstered by colorfully-illustrated posters, helped Lita see how she should behave toward her children. And they gave her help to set behavioral boundaries for Miguel Angel too. “I started teaching my son about how we had to behave,” Lita said. “Now, we both love each other more. I try to give him love and above all, he knows that I love him so much.”

Lita said talks by a professional psychologist provided one of her most favorite tools – hugs. “The psychologist told us about the importance of hugging, that it costs nothing and it’s easy to do. And that it brings a lot of blessing to the people who receive the hugs,” Lita said.

Lita resolved right there and then to hug her child more often. As she looked around the classroom, many of the women hearing the talk were crying because the lesson impacted them so much.

And among the women crying was Lita’s mother, Higidia.

“I realized she had changed a lot,” Lita said.

So much so, that in time, Lita courageously gave her own mother a hug as well. “I hugged her, and she didn’t reject me. It was incredible,” said Lita.

Like Lita and Higidia, many mothers in the slum communities surrounding Lima are experiencing great changes in the personal and family lives due to FH’s teaching. Lita sees herself sharing these messages with other mothers for years to come. And she also already thinks about the future, of how Miguel Angel’s children – her grandchildren – will have a better future.

So often we think that the solution to problems is building something or offering some new technology. With help from child sponsorship’s monthly donations, FH has created a small army of mothers trained to end violence with simple small-group meetings. Block by block, mothers are breaking the chain of violence.