How Disturbing Is Injustice?

When you think about the injustices suffered by people around the world, how disturbed are you?

Dr. Larry Ward, founder of Food for the Hungry (FH), was disturbed by injustice. He marked up his Bible, noting passages discussing social justice. This year, as we celebrate our 50th anniversary, we are looking back at some of the Scriptures that impacted Dr. Ward.

One such passage in the book of Job is particularly graphic. In Job 29–31, Job defends his blameless life. He refutes his friends’ assertions that he must have sinned against God to deserve the affliction that has befallen him. In Job 31:16–23, he says:

“If I have hurt the poor or caused widows to weep, or refused food to hungry orphans . . . or if I have seen anyone freezing and not given him clothing or fleece from my sheep to keep him warm, or if I have taken advantage of an orphan because I thought I could get away with it . . . let my arm be torn from its socket! Let my shoulder be wrenched out of place! Rather that than face the judgment sent by God” (TLB, italics added).

The Whole World and the Whole Person 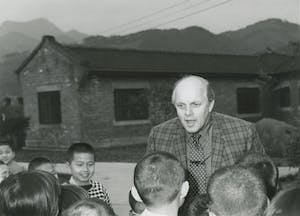 Dr. Ward marked up his Bible, noting passages that spoke of God’s care for vulnerable people.

It seems extreme when Job says that he would rather have his own limbs torn than to bear the thought of having brought injustice to the poor. He shows the depth of his concern for vulnerable people by underscoring his personal anguish when thinking about their suffering.

In reflecting on passages like this one, Dr. Ward was fond of saying, “God’s love reaches out not only to the whole world, but also to the whole man.”

Job’s words ring true for FH staff today, as we live out our calling to end poverty together with the community members we serve. Our strategies are solid, based on biblical truth, research, and experience. They are also scalable, reaching thousands of people every day. But there are always opportunities for staff to see the individual and show personal compassion.

Personal Commitment to the Vulnerable

One such story came from Joseph Ntakirutimana, Africa Regional Adult Education Coordinator for FH. Joseph told us the story of his colleague, Kabakira Jean Paul, a staff member in Burundi who was personally committed to helping the poor.

Kabakira first began working with FH as part of a two-year project helping HIV-positive people. He was responsible for fighting injustice by distributing anti-retroviral (ARV) medications that would save the lives of people infected with HIV. Because of the refrigeration needed to maintain the medications, patients would often have to travel long distances to access their doses. 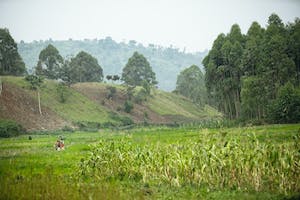 In Burundi, people often travel long distances on foot to get the medicines and treatment they need.

“It is an afternoon of a hot day and a young woman has arrived at Gisuru hospital to pick up her next ARV dose package,” Joseph shared. “She is HIV positive, and she has traveled from her community 15 miles away. She looks exhausted and very hungry.”

The only problem? The hospital is out of medication. The next shipment will arrive tomorrow, but the woman has no transportation, no money, and no place to stay.

“Kabakira does not take long before deciding what to do,” Joseph wrote. “In fact, he and his coworkers have had to deal with similar situations many times. Quickly, they contribute personal money to buy her a simple lunch. Then they find a local hostel, again contributing their personal money to make it possible for her to stay.”

The next day, the woman receives her ARV dose package and departs for home.

A Common Story of Uncommon Justice

Joseph pointed out that the story of Kabakira and the woman was an example of an everyday occurrence. Kabakira personally helped many people who found themselves stranded waiting for ARV dose packages. He also helped to meet various needs of others, again with his own resources.

Kabakira was not expected to show this personalized compassion to others as part of his job description. It was his personal faith that led him to give. Like Job, he would rather have been personally harmed than to have allowed vulnerable people to suffer.

God Sees Our Acts of Compassion 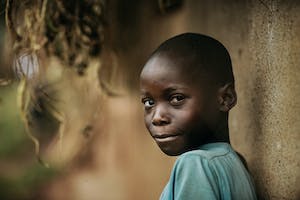 “He who refreshes others, will himself be refreshed.” (Proverbs 11:25)

Kabakira’s job with FH was for a limited time. The project on which he was working lasted for only two years, after which he would be looking for a job.

God saw Kabakira’s work ethic and kindness, and so did FH. Kabakira was offered a full-time, permanent position with FH, which he accepted.

Reflecting on the story of Kabakira and other compassionate staff who share Job’s intolerance for injustice, Joseph remarked, “I believe that God works secretly in the lives of those who go an extra mile to unselfishly help a fellow human being, fulfilling his word that ‘He who refreshes others, will himself be refreshed.’” (Proverbs 11:25)

Other posts in this series:

God Hears Us and Answers Us