Investing in the future with breastfeeding

Marie-Pierre is a 22-year-old mother of two living in rural Haiti, in the mountainous region called Kenscoff.   The roads are so poor, it takes over an hour to go the 15 miles from Port-au-Prince to the largest town Kenscoff.  Most of the year, it’s hard to grow crops because there’s no water.  Hospitals and schools are unreachable for thousands living in villages at the end of narrow mountain paths. 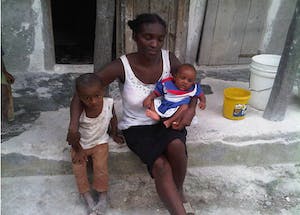 Marie-Pierre with her two children

Marie-Pierre didn’t have any training on health and nutrition for her older child. Breastfeeding is something mothers in her village practiced, as mothers have for eons everywhere. But they didn’t know when to add in solid food, or the benefits of exclusive breastfeeding for newborns.

With Food for the Hungry’s help, funded by a grant from the UK government agency DFID, things were different for her younger child. “I must tell you honestly that I am happy to practice exclusive breastfeeding,” Marie-Pierre says.  “My baby hasn’t been sick since birth!”

Food for the Hungry helps mothers worldwide learn better ways to provide for their babies through breastfeeding:

FH taught Marie-Pierre more than how to breastfeed effectively.  Experienced mothers, trained as “mother leaders” in her community, also taught basic hygiene.  This means teaching about how personal cleanliness is related to staying healthy.

Hand washing after using the bathroom is one of the most important lessons. It’s a lesson that paid off for this region both after the massive 2010 earthquake and, more recently in 2016, when Hurricane Matthew brought flood waters.  Due in no small part to FH training, communities in Marie-Pierre’s region where FH works avoided the cholera outbreaks — or fear of outbreaks — that plagued other parts of Haiti.

From day one, breastfeeding puts the child on a path not only to freedom from illness, but also to the best possible physical and intellectual growth. Nutritional deficits in the first five years of life can cripple a child’s stature, development and ability to perform well in school or jobs for the rest of their lives.

Victories are few in places like Kenscoff. Marie-Pierre refers to her baby’s health as the “profit” for participating in the training. Within a few months, mothers and community leaders see that their time commitment and behaviors make a difference.  As these mothers grow older, as the children grow up, they’ll take on new challenges in their community like the lack of health care within reach, and the lack of schools.