Poor nutrition was at the heart of most problems for the Pooya family in Uganda – and there were many problems.

Hunger was a daily condition. They would have one meal on good days, with just one type of food. During the dry spells, they often went days without a meal of any kind.

In addition to the lack of food and nutrition, Pooya could not afford health care for his large family, which included his aging mother.

“My son had no peace at home or with himself,” said Pooya’s mother. “He had two wives and 10 children to care for. He knew they had to eat, but he didn’t know where to get food for them, especially during dry seasons. I myself could not help, because I also was dependent on him.” 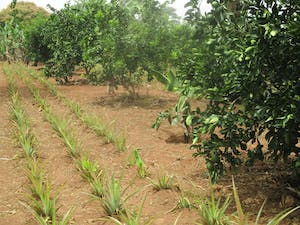 Flourishing kitchen gardens were the first step to family nutrition for a large family in Uganda.

Pooya explained that his children became sickly and were in and out of the health center. Workers at the health facility told him this was a result of poor nutrition.

“Sickness invaded my home and some of my children died due to lack of proper care,” said Pooya. “I myself looked much older than my age because of worry, stress, and poor nutrition.

“As a father, I was always depressed because I was unable to care for my family,” he said, adding that the overwhelming responsibility and failure left him angry and bitter.

All this led to physically abusing his wives, he admits, which in turn led to abuse of the children. During this dark time, one of his wives threatened to leave and one of his daughters became pregnant as she was trying to escape the situation at home.

A Path Out of the Darkness

Food for the Hungry (FH) began working in the community in 2016, and by 2019, Pooya began learning from FH programs. The family entered the FH Food Security & Nutrition Improvement Project. A number of his children became sponsored, which helped with their education needs, ranging from supplies to after-school support programs.

Pooya had land, but he had never had the experience or training to grow crops or engage in any kind of farming.

FH staff helped the adults in the Pooya family establish several kitchen gardens around the home, since improving the family’s nutrition was the top priority. They helped them decide what to grow and taught good gardening practices so their crops could thrive. 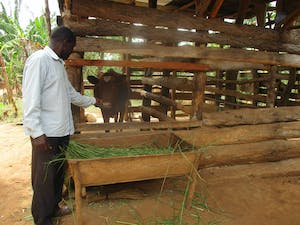 A cow and other livestock now also contribute to Pooya’s successful farming ventures.

Pooya participated in livelihood training including Farming as a Business and Post-Harvest Handling, and FH helped him obtain a silo to store food for future use. The gardens now provide ample greens for the family and they sell their surplus for a source of income. With this, they are able to purchase other foods that they can’t grow at home, such as rice, yams, or millet flour.

“We also grow fruits – oranges, mangoes, pineapples – that complement our diet,” Pooya said. The surplus fruits are also sold. And the family now raises livestock, which FH helped them to obtain.

“All of us look good now including my old mother,” said Pooya. “Look at my healthy children! They are now my source of pride. I am so proud of what my family has become. All because we started by applying the acquired knowledge on kitchen gardening. I am now a proud father.”

He is also very happy because of the help FH child sponsorship has provided to his children with their education.  He says he hopes to see his children obtain a better education than was available to him.

“Because of FH, our lives have greatly improved,” he says. “Our health is good and our lives have changed. We do not go hungry, we eat the right foods, and we eat more than once a day.”

“I too am a proud mother,”Pooya’s wife added. “Because of the FH training, I can now care for my children and lovely husband. I learned how to feed my family in a better way and more so, I learned how to keep my home clean. And we are passing these skills and knowledge to our children.”

Hope The Size of a Vegetable Seed

Meet Three Families with Hope for the New Year