Can You Love Your Neighbor as Yourself When You're Poor?

When we think of people living in poverty, we often think of how we can help them. But have you ever considered that everyone has something to give? Even people we see as poor can love their neighbors as themselves.

God’s Word implores us repeatedly to care for others. More than simply giving out of our abundance, God tells us to be generous with all that we have.

“You must love and help your neighbors just as much as you love and take care of yourself” (James 2:8, TLB)

James’ words about loving our neighbors were of special importance to the founder of Food for the Hungry (FH), Dr. Larry Ward. He marked up the margin of his Bible, highlighting the importance of generosity toward the poor. This year, as FH celebrates our 50th anniversary, we are taking a look at some of these verses that were especially significant to our founder.

The book of James is filled with lessons about how we are to treat the poor. James tells us that our kind thoughts must be accompanied by action (James 2:16-17). He also tells us that “pure and faultless” religion includes looking after orphans and widows (1:27).

James emphasizes generosity as the lifestyle of the believer. It’s a direction that has challenged Christians throughout history. How much are we to give, and to whom? How do we know what we can afford to give? James’ simple answer, “as much as you love and take care of yourself,” draws from Leviticus 19:18, which says, “Love your neighbor as yourself.”

In our work at FH, we are constantly presented with examples of people who give not only out of their abundance, but also love their neighbors out of their poverty.

Kebede Lulie, Marketing and Communications Manager for FH in Ethiopia, tells the story of a widow in the town of Arib Gebeya. The world would say that this woman, Yezab, had nothing to give. But Yezab disagreed.

At the age of 66, Yezab had lost most of her family. People living in poverty are especially susceptible to illness, and Yezab’s family was no exception. Her husband had passed away, along with six of her seven children. Her only surviving child, a daughter, had reached adulthood, married, and moved to a town far away. 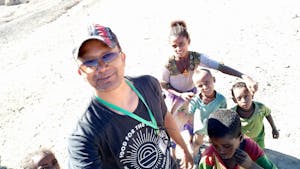 The Widow Meets an Orphan

One day, Yezab came across a 9-year-old boy at her local market. The boy, named Bekalu,* had been living at the marketplace and sleeping outdoors after his parents died from AIDS. Due to the stigma of HIV/AIDS in the community, friends and family members had been unwilling to love their neighbor by inviting Bekalu into their homes.

“Yezab had known Bekalu’s parents during the good times of their lives,” Kebede said. “She also knew how his parents had died, and that Bekalu was HIV positive. But she could not let him spend one more night in the cold, open marketplace.”

Yezab brought Bekalu into her home and became his guardian.

Providing the Love of a Family

FH was already working in the community where Yezab and Bekalu lived, supporting orphans and vulnerable children with practical help. When FH staff met Yezab and Bekalu, they were able to enroll them in the program to provide additional support. With the help of FH and Yezab, Bekalu was able to return to school.

Kebede spoke with Bekalu to learn what has been most helpful in his life. He underscored what it meant for Yezab to love him as a neighbor – and as a son.

Bekalu said, “Thanks to Yezab, I feel healthy and safe, since I started to live with her in this hut. FH gives me many things like wheat grain, cooking oil, laundry soap, body soap, a school uniform, and school stationery. They take me to the health center whenever I feel sick.

“But of all these, Yezab is the one who cooks my food, washes my clothes, and takes care of me. If she hadn’t taken me into her home, I could have died of hunger and cold outside in the marketplace.”

As a widow living in poverty, Yezab could have ignored the cries of Bekalu or simply prayed that someone else would take care of him. But when she chose to welcome him as part of her family, she truly loved her neighbor as herself.

*Bekalu’s name has been changed to protect his privacy

Other Posts in This 50th Anniversary Series:

How Can I Listen to the Poor?

How Disturbing Is Injustice?

God Hears and Answers Us