Meet Mike B. Meyers: Q&A with Food for the Hungry’s New CEO 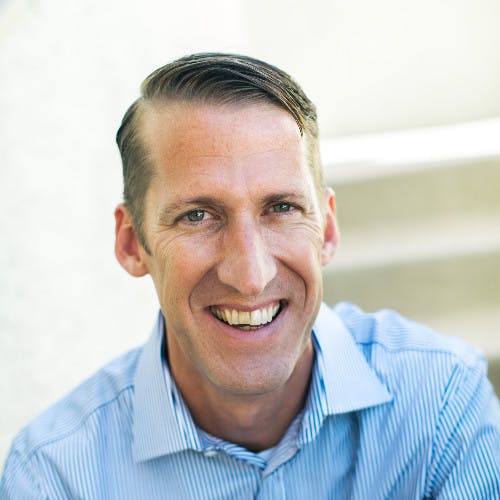 Mike B. Meyers has been appointed Food for the Hungry’s newest CEO to succeed Gary Edmonds, as of October 1.

Meyers joined Food for the Hungry in 2012 and has served as the organization’s Chief Development Officer for the past four years. In his role, he oversaw FH’s global strategic development plan, helped to double child sponsorship, and played a key role in shaping The Heartbeat, the organization’s core values and purpose statement.

We sat down with Mike B. Meyers to chat more about him, his journey, and hear his thoughts on where FH is headed.

Congratulations on your new role as CEO! How do you feel?

I feel very humbled and honored. I never mapped out my life envisioning that I’d be CEO someday. My prayer has always been that God would place me in positions where I can reach the most people possible for His Kingdom. Now I see that even more clearly with this opportunity to serve. Gary has done a great job of building up a really strong leadership team, including our current leadership in Africa, Asia, and Latin America. I can’t imagine being in a better place than running alongside this team as we pursue our vision of ending all forms of human poverty.

What initially got you interested in doing humanitarian work?

Growing up, I actually wanted to be a doctor and went to Kansas State to study life sciences as a pre-med. However, God slowly began to change that. For two summers in college, I worked with a homeless program in New York City, which changed my perspective on what’s important and what I’m called to. That all culminated the summer before my senior year of college. It was the summer of 1995, and I went to Russia and Poland with a youth ministry working with various churches there.

It was my first time seeing poverty face-to-face, and I came back completely changed. I began to learn as much as I could about international development and ministry. I subscribed to different magazines, went to missions conferences, and read everything I could. Looking back, I still remember reading a magazine article about an orphanage in Africa, for kids whose parents had died of AIDS. That was when I knew I was meant to do this kind of work. Senior year, I decided not to take the MCAT and to raise support instead.

I’ve been working for nonprofit organizations ever since. I also spent close to four years in Australia doing community development work in Southeast Asia and Eastern Africa. When I first started working for FH back in 2012, I remember feeling that I had finally found an organization I was truly passionate about where I could contribute my skills.

What set you on your personal faith journey?

I grew up in a Christian family, but I wasn’t always a well-behaved kid. I liked to color outside the lines. That summer in Russia and Poland, I had my first encounter with poverty and my faith became real. The things I saw that summer broke me. I remember coming back and not being able to tell people my story without tears. Up until that point, I had loved God and believed in Him. But it wasn’t until I was a little over 20 years old that I got to a spot to say, “I’m going to change my actions to live my life in a way that reflects God, and commit myself to serving others.”

Is there a story that sticks out in your mind in your experience at FH?

There are so many stories I could tell from my time at FH, both on the field and back home. Our family has sponsored a few girls from Mozambique through FH. Sponsorship has made a great impact in our lives, especially for my three kids.

One story that also sticks out is from a trip I took to Lebanon last year. I was there to see how we could deepen our work with Syrian refugees, and one family invited us into their tent for coffee. The woman of the household proceeded to tell us her story of how she had carried her four kids across the mountains in the middle of the winter. She demonstrated with her arms how she carried her newborn baby on her back, one in her arms, another one on her hip, and her disabled son by her side.

Even with a language barrier, I understood the incredible journey she had gone through to escape. Since arriving, it was obvious how God had impacted her family’s lives. As we were leaving, the husband, a bearded Syrian man, walked up to me and gave me a big kiss on the cheek. I’ve been greeted many ways, but never like that before! That day left a mark on me. I want to be a part of that kind of work for many years to come.

What are your hopes and vision for the ministry moving forward?

It has been a joy to walk alongside Gary as he charted new ways for us to work together. It feels natural to continue what’s already in motion. I’m excited to continue God’s work through Food for the Hungry in serving the most vulnerable, and being the best in the field at graduating communities from extreme poverty.

Follow Mike B. Meyers and the latest FH updates on social media: