Einstein famously said that if he had one hour to solve a problem, he would take 55 minutes to define it. Here’s one: What’s the problem with poverty? Poverty is a global problem. But what kind of problem is it, and why does poverty exist? The definition is directly proportional to our ability and approaches to solve the problem.

Food for the Hungry is just one of many organizations offering solutions to global poverty. However, there is no agreement between these organizations on the nature of the problem or its root causes, much less on how to solve it. Approaches and solutions span a wide range, each with its own theory of the why and how of poverty. Let’s explore three different theories about poverty:

Poverty is an economic problem

“It’s the economy, stupid!”  So said a former US presidential candidate some years ago. This view of poverty drives all solutions to the end of developing strong global and national economies. Lack of material goods and the ability and capacity to produce them is seen as the underlying problem. The primary means to create that capacity is through strong policy and institutions. The International Monetary Fund and World Trade Organization are big players here. Besides taking a one-size-fits-all approach to poverty regardless of context, the harshest criticism of institutional-led solutions, according to Nobel prize winning economist Joseph Stigiltz, is that they always favor the interests of the financial institutions over the interests of the poor.

Poverty is a cultural problem

Like the air we breath, some cultures may simply be healthier than others. This view of poverty premises that the “air” of certain cultures is more favorable to wealth and progress than others. “Progress” in this context is nearly always associated with a presumed superiority of Western culture and democratic capitalist ways of life. Culture thus influences a basic understanding of life and purpose, personal health, education, prosperity, and justice. Not surprisingly, this view fosters notions of “good or bad” cultures and encourages bias and prejudicial attitudes. Solutions in this vein would identify power structures in society and attempt to identify the underlying pretense that may intentionally keep whole groups in poverty as a means to serve the cultural majority.

Poverty is a factor of where you live

The geographical or environmental view of the problem is more deterministic than either the economic or cultural approaches. Physical location, climate, and biological distribution are aspects of this understanding of poverty. Source data is collected and cited that most “successful” societies lived in the more temperate zones on the planet. Thus, “sustainability” is a key concept in this theory, with the goal to discover solutions that foster sustainable relationships between humans and nature.

Enlarge the problem and take a look 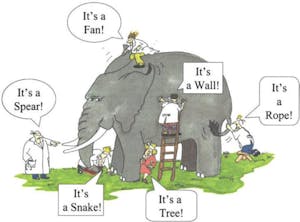 Economic, cultural and geographical and environmental understandings of the problem of poverty are like this elephant, though they all have great influence today. However, are they complete enough? General Eisenhower famously suggested that when a problem is hard, enlarge it. There is truth to each of these views of poverty. But each is a half-truth and individually don’t scope the problem big enough. Enlarging the problem means stepping back and taking a look at the whole “elephant” – at all the dimensions in which poverty exists – cultural, geo-political, economic, and spiritual. Stepping back and taking the whole into account leads to a startlingly different answer to the question of “what’s the problem with poverty?”

And the answer is: Poverty is a problem of relationship.

What Does It Mean to Practice Resurrection?

Ending Poverty, Together: The “Nature” of Child Sponsorship