Retrieving Water is the Work of the World's Remarkable Women

Today is World Water Day. And when I think about the importance of water, I remember how just a few months ago, I watched an elderly woman lug a plastic 5-gallon bucket full of water up a steep, muddy hill. Her name is Virginia. She was reenacting her daily trip to collect water from an open stream half an hour away from her house in a rural area not far outside of Santo Domingo in the Dominican Republic.

In broad terms, the Dominican Republic is doing well. In 2015, around 85% of the country had access to an “improved” water source. That means that 85% had water that is protected and “clean,” or uncontaminated. This is no small thing, when more than 800 million people still lack even a basic drinking water source.

Virginia used to be part of the 15% of the Dominican Republic’s population that didn’t have access to clean water. She was one of the 844 million people who either have to travel more than half an hour to get clean water or use water that isn’t safe to drink. You can learn more about how Virginia’s life changed with access to clean water by reading her story on the Food for the Hungry (FH) blog.

And I can’t talk about the importance of water without acknowledging that collecting water is women’s work.

Don’t believe me? Think about these facts.

The World Health Organization (WHO) also estimates that 35% of women around the world have suffered physical and/or sexual violence. And sending women and girls out to collect water increases their risk of suffering from sexual harassment or assault. Lack of sanitation facilities like toilets forces women to retreat into fields or secluded areas, making them even more vulnerable to sexual violence.

We say that women and children are vulnerable. It’s true. Does that mean that they are weak? Think again. Walking and carrying gallons of water miles and miles a day requires strength, endurance, and determination. 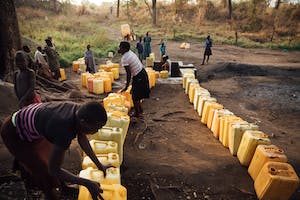 Women in Uganda line up jerry cans by a local water source.

Water Can Be Scarce

In many of the countries where FH works, water is scarce. And the face of water scarcity is an adult woman, and sometimes a young girl. She carries plastic buckets like the one Virginia used, or a bright yellow jerry can.

When she reaches her water source, she waits in line. If there’s a drought and resources are in high demand, Virginia tells us, neighbors fight for their families to get precious water. If they are lucky, they carry around 40 lbs of water (the weight of the 5 gallons that fit in a plastic bucket or jerry can) back home, continue with the household tasks, and wake up the next day to do it again.

Water Is A Women’s Issue

Yes, water is about health. Every day, 1,000 children who aren’t even old enough to go to kindergarten die because of lack of drinking water, sanitation, and hygiene.

But water is also about women–their work, personhood, and safety. What would happen if, instead of losing hours of a day collecting water and fearing for their own safety, the world’s women had the time and energy to attend school, invent solutions, start their own businesses?

And what if water is what helps that happen?

When you donate water through FH’s gift catalog, you help people who have already identified a lack of clean water as a big issue in their community. Donating a water purification system, water filter, or water well lets you join a community in achieving justice for their children and women. Girls in Chunchuymarca, Peru, once walked 20 kilometers to access water. Through FH, the community now has access to clean water.