How to Save When Poverty Prevents Banking

Running to the bank is one of my least favorite chores. Everyone there seems to be in a hurry, but the line is always long. Money issues are rarely fun to deal with, and overall, it’s usually inconvenient and boring like so many chores can be. But have you ever thought about how lucky we are to be able to use a bank? I hadn’t, until I learned that so many people around the globe don’t have access to banks. And often, where there are banks, having too little income means you’re not allowed to use an account. Not only are accounts inaccessible for so many people, but that means loans are also off the table. What a hard place! You can’t save your money effectively; you can’t get a loan to start a new business. Often these people feel stuck in their poverty without a good way to break out.

(You can read more about how this effects the majority of the world’s population living in poverty here: World Bank: 75% of poor don’t have bank accounts – CNN)

When you can’t “take it to the bank”

So what do you do when you can’t use a bank? Food for the Hungry (FH) stepped in to help people in communities around the world find a solution. That solution is savings groups.

Savings groups allow adults to come together and create a sort of community bank where members agree to contribute a certain amount a month as a savings. They can also take loans at an agreed upon interest rate. It’s the perfect solution.

You can read more about how savings groups work, by clicking here.

A Story of Personal Success 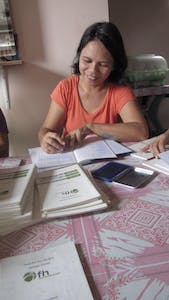 Marites, 42, is a single mother of three. She is able to save money and give hope to her family through FH savings groups.

Marites Varicio is a 42-year-old single mother to three children. She lives in the Philippines where she has struggled to meet the needs of her children on just her own income. Then she joined the savings group when it started in February of 2015.

“Before I joined the savings group, I thought that saving is not for the poor, that I could not save even a small amount of money because my children were hungry,” Marites said.

But then she learned that she could prioritize saving and that even a small amount would go a long way.

“I soon realized that poverty is neither a hindrance nor an obstacle for one to save,” Marites said. “For me, it is just a matter of personal choice, conviction and discipline. Through the years our group has become stronger because of trust, transparency, good relationship and dependence on each other”

The savings group has had huge financial benefit for her, but the thing she is most grateful for is the financial provision during her son’s illness.

“I was financially incapable then and didn’t know where to go,” Marites said. “Through the savings group, I was able to acquire loans and this has allowed me to bring my son to the hospital.”

Through this experience, she realized the importance of saving a small amount of money for their family’s emergency needs. She was encouraged to continue the habit of saving and to pay back her loans. During their first annual pay-out, she was able to buy new sheets for the roof of their house to prevent leaks during times of rain. During the second pay-out cycle, she was able to purchase materials for her small business and school supplies for her children.

Perhaps the best part of the savings group is the way it is impacting the future. Marites says the group is not only having a huge impact on her life but also the life of other members. The attitudes generated through training are even penetrating the younger generation.

Marites says she can see a brighter hope for the future because her children are even starting to save.

“I am proud of my children because there have been changes in their spending habits,” Marites said. “My children are now practicing savings in their school and has in fact led a saving group within their peers. I am truly blessed and grateful that I belong to the savings group.”

Praise God for real transformation like this. You can help other families experience change like this by donating here.