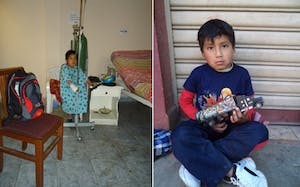 We do our best to teach children about safety, and we hope it will stick. But sometimes, accidents still happen. And sometimes, we just don’t have the means to make it all better — unless someone helps us out.

Alex, an 8-year-old sponsored child, was alone one day in his home in Bolivia. He was hungry and decided to make himself something to eat.

He tried to light a fire to cook with, but accidentally spilled gasoline on himself and caught on fire. Miraculously, the fire was quickly extinguished, but not without leaving third-degree burns on Alex’s abdomen, arms, legs and face.

Alex, not wanting his parents to find out what happened, tried to clean the wounds himself before they got home. Sadly, this ended up causing an infection. Of course his parents did discover what happened, and they took him to the nearby hospital. The hospital in their village was not equipped to effectively treat Alex’s severe burns, so he was transferred to another hospital further away.

After several treatments, the infections still continued to get worse. Alex’s health was deteriorating. The doctors needed to perform another procedure, but Alex’s parents couldn’t afford it. They had already done all they could to pay for his previous treatments and were out of options. 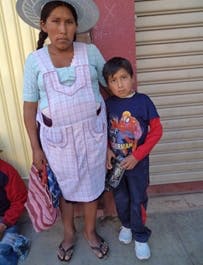 Food for the Hungry (FH) staff found out about this need, and they stepped in to help Alex get the treatment he needed. They collected donations among their own staff. Then they reached out to churches to gain more donations.

Finally, they looked to FH’s HEART (Health Emergency Action Response Team) Fund for assistance. The HEART Fund is a pool of money designated specifically for life-saving surgeries for children in FH’s communities, and this situation definitely fit the bill.

Through all of the donations and funding, Alex was able to have his third surgery which was very successful! The worst of Alex’s health battle is now over, and the procedure was also able to prevent further infections from occurring.

Alex is now on a healthy road to recovery, attending regular checkups, and being visited often by FH staff. He was so excited to get back to school and study math, his favorite subject.

Alex’s mother is so thankful for the lifesaving help that Alex received. The FH Bolivia staff also expressed their gratitude.

We deeply appreciate the support from HEART Fund that has saved the life and future of this little boy. To God is all the glory.

Donate to the HEART Fund to help children like Alex who face medical emergencies, or consider sponsoring a child with FH.