We Christians sometimes use fancy language to describe the Bible. We call it the Word of God, the Holy Scripture, or the Good Book. Here’s a new one for you: Building Block.

For Guidmon Urcuyo,  the Bible helped put him on the path to leadership in his community of El Limonal, Nicaragua. Now 19 years old, Guidmon volunteers with Food for the Hungry’s programs aimed at helping children. But when he first joined FH’s programs, Guidmon’s future rested on a shaky foundation.

Guidmon became a sponsored child when he was 12. His father couldn’t keep a stable job and his mother worked as a domestic. With an average monthly income of $40 a month, they could barely keep food on the table. Guidmon had no interest in school or in anything spiritual.

FH staff visited the Urcuyos at home regularly and started monitoring Guidmon’s schoolwork. Through FH, the family met the pastor at a local church. Guidmon started participating in his church and studying the Bible.

With FH’s help, he was able to afford school supplies that allowed him to stay in school, even when the family income dipped dangerously low. Unlike his parents, Guidmon finished high school. “God put intelligence in me, and if I did my best, I could overcome any obstacle,” Guidmon says.

Today, Guidmon leads youth groups in Bible studies, coaches sports, and participates in Bible camps. He encourages his two younger brothers and younger sister to stay in school. They also participate in the Christian after-school club called Feed My Lambs.

Guidmon’s education and strong biblical grounding have laid a foundation for a new future. Soon, Guidmon will start his college degree in sociology, funded in part by the FH scholarship program. 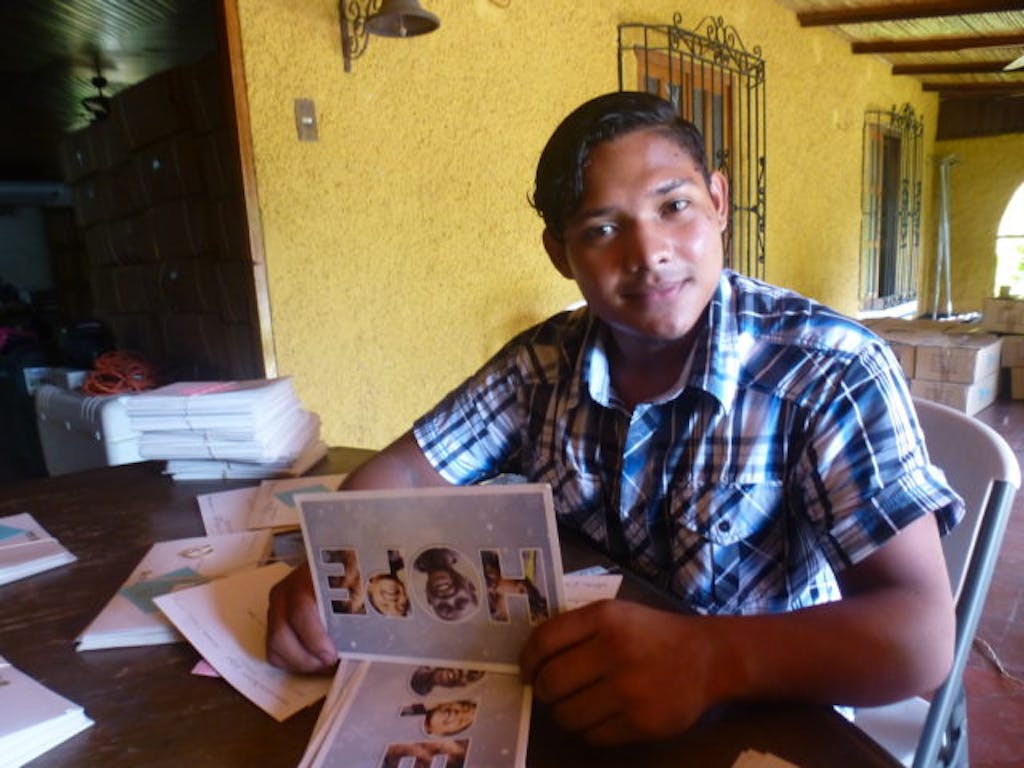 Guidmon helping to prepare the Christmas cards that FH Nicaragua sends to sponsors, from sponsored children.

“I’m grateful for the unconditional support that FH has given me,” Guidmon says. “I feel part of this ministry. I’ve grown in all aspects, including my spiritual life, thanks to the devotional that the FH team shares each morning. My greatest desire in the future is to help others, as FH helped me.”

Guidmon has also seen his whole family situation transformed. His father, Noel, grew in his understanding of what it meant to be a good father. As a result, he started pursuing better jobs.  He now works as a security guard and earns five times what he did when Guidmon was small.

Without tools like Bibles, Guidmon and other children like him may not hear of God’s love and plan for their lives through Jesus Christ. Bibles are essential building blocks in any community where FH works. With Bibles, pastors and FH staff can work together to create godly leaders with servant hearts.

When you give a Bible through FH’s gift catalog, you strengthen an entire community, child by child.