It’s a sad statistic–nearly 13% of the children in Ethiopia have lost one or both parents. That’s one of the highest percentages in the world. And UNICEF estimates there are some 800,000 Ethiopian orphans who have lost a parent to HIV/AIDS.

In places like Ethiopia, even losing one parent is enough to spiral a family in to abject poverty. It’s especially bad when the family loses a father, since males have higher earning power. And when a parent dies, the caregivers who are left may be too elderly to work, or may be sick with AIDS themselves.

That’s why these families need help, and not just for today. They need help so AIDS doesn’t devastate them for decades to come.

How does FH help Ethiopian orphans thrive? A grant from the Canadian Foodgrains Bank and World Renew enables FH to reach out to these families in dire need in the following ways.

2. Income Support: Tesfa Ebabu lost a husband and therefore the family’s source of income. While FH did directly help her children, the program also invited Tesfa into a savings group. “I started in a savings group and borrowed some money to do business, which allowed me to afford daily expenses,” said Tesfa.  Types of businesses that FH’s program supports include raising sheep, spinning cotton, running a small shop, or making injera, the local staple food. 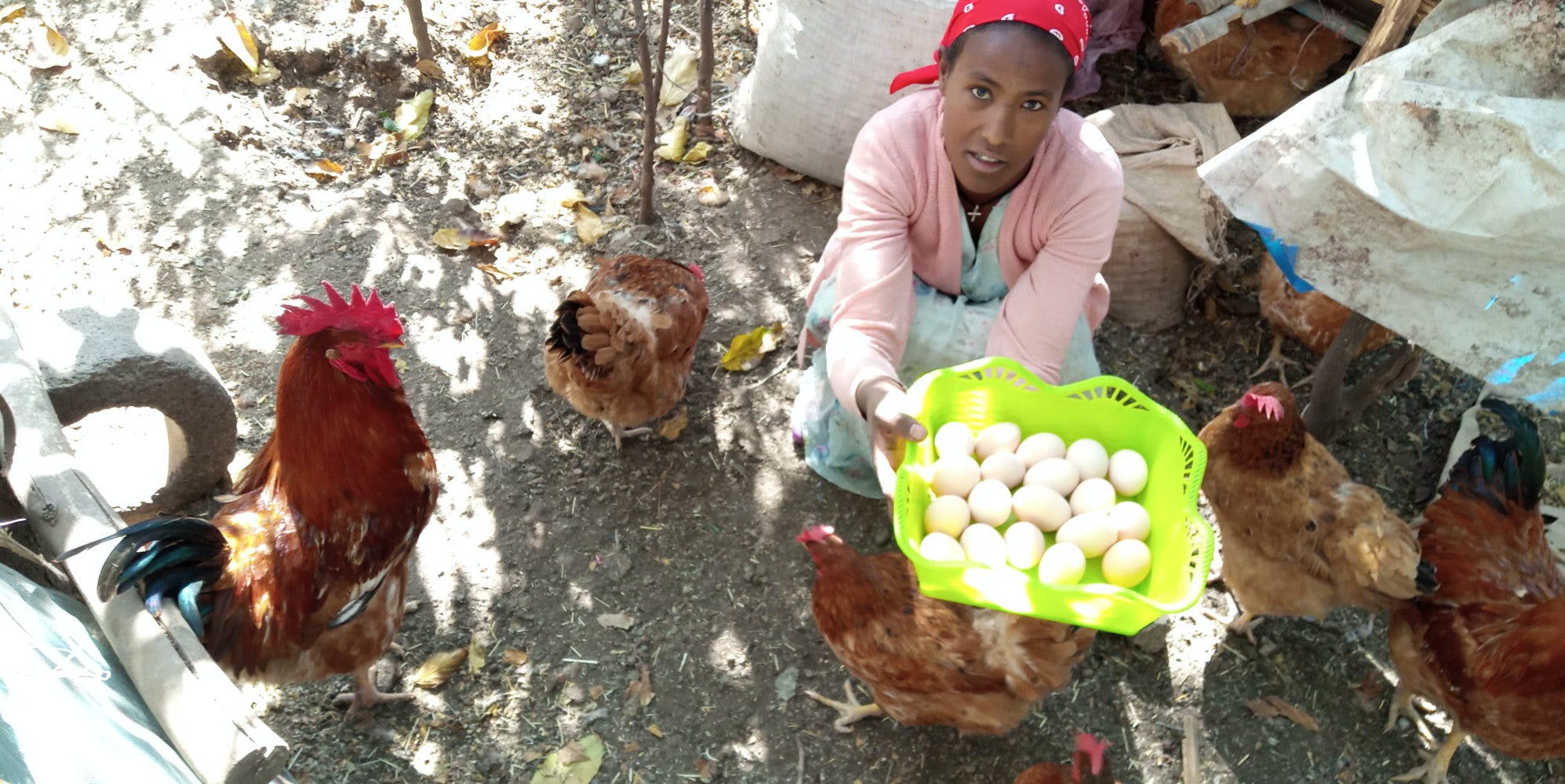 Raising egg-laying chickens is one of the easiest and most profitable small businesses, for families like Tesfa’s.

3. Emotional Support: Every month, FH staff visit orphans’ homes to meet with both children and their caregivers. Picture a meeting like a visit from a social worker. This provides children, parents, and grandparents an advocate to help solve myriad problems. They also bring a listening ear. In Tesfa’s case, she reports that the home visits “helped my children quickly recover from sorrow and the associated depression due to the death of my husband.”

4. Educational Support: Providing children with school supplies and after-school tutoring is key. When FH’s program started, some 13 percent of the orphaned children were failing grades in school. That’s a first step on the slippery slope toward dropping out of school.

Now, nearly 100% of children are promoted to the next grade every year. The school dropout rate is near zero. Since the program began in 2007, over 500 children have entered vocational training and higher education!

5. Health Support: Children and caregivers in the program may themselves be HIV-positive. And, their malnutrition leaves them more vulnerable to disease. FH staff insure families have adequate access to medicines and care at referral hospitals. The project has also successfully lowered intestinal worm infestations by 70% among the program participants. Keeping the children healthy is one of the best ways to improve school performance.

There’s Still More to Do

As the Ethiopian orphans program moves into year 2020, there are challenges still to face. While the orphans are finishing school at astonishing rates, jobs are hard to find. Since raising family income is a top priority for this program, FH is working on solutions to joblessness, including helping OVCs approaching adulthood to start their own small businesses.

Additionally, periodic drought plagues the area where the program operates. FH’s USAID-funded programs in the region fight the effects of drought. Food prices and availability for orphans’ families would certainly be even worse, were it not for FH’s efforts to make food available in trying times.

FH considers a child who has lost either parent to be an orphan, not just those children who have lost both parents. Most people can identify several Bible verses that refer to “orphans.” But there are dozens of references in scripture not only to “orphans,” but also to “the fatherless.” There’s much work to do, to help people see those verses apply even today.

Ethiopia isn’t the only country where orphans need help. When FH enters an area, orphans and their caregivers go to the front of the line for help, no matter where we work. You can help by sponsoring a child through FH in countries around the world to reach the most vulnerable.

Africa Updates: What God Is Doing in 2019

What do Flint and Ethiopia Have in Common?