A Bible and Sponsorship Knit Family Together

It’s a painful problem: No money, no jobs. It’s a constant issue in Bolivia, where Food for the Hungry (FH) sponsored child Deybi lives with his family. Things only got worse when COVID-19 hit and jobs were even harder to find.

Parents all over the world made hard decisions this year to leave children with caregivers — elderly grandparents, neighbors, teenage siblings barely old enough to take care of themselves. Some in Bolivia will go from rural areas to work in construction or hire out as live-in domestic help. They may head for Bolivia’s lowlands to work in farm or natural gas industries, or even cross borders to work in neighboring countries.

Like many parents, Deybi’s mom, Justina, decided to leave nine-year-old Deybi and his brother and sister with their grandmother. For six months she worked some distance away. This really affected Deybi in many ways. “Because of my mother’s sudden travels, I was very sad,” Deybi said. “No one would help us with our homework.” It was hard for his grandmother to provide what they needed.

And, Deybi said, he missed his mother’s love. 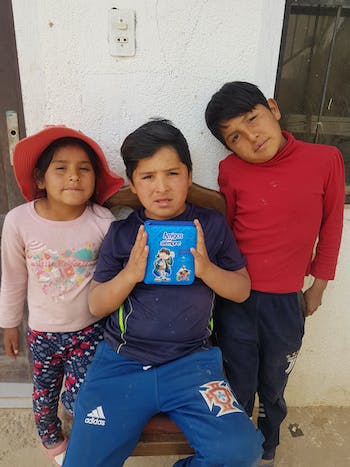 Deybi holding his Bible alongside his brother and sister.

A Bible and Sponsorship: Reuniting a Family

Because Deybi is a sponsored child, FH staff routinely visit his home. And when a child’s parents migrate for work, community staff pay particular attention to the situation. Many FH staff working with sponsored children have backgrounds in social work, teaching, and counseling. They listen as stressed grandparents and guardians relate the struggles that caused the families to split up. Often, they help families identify healthier ways to respond to problems they face.

In Deybi’s case, staff saw the grandmother wasn’t providing what the children needed. When the mother came home, FH staff convinced his mother Justina that it wasn’t worth it to leave her children. Justina participates in FH’s family garden program, which provides food for the children and can be a source of income by selling excess produce.

The support from FH didn’t end with resolving the care and economic issues. FH also presented Deybi with a Bible, which he shares with his siblings.

Justina and Deybi’s older brother Brayan were attending church — and Deybi decided to go as well. Brayan reminds Deybi to read his Bible and grow in his faith, and Justina reports she too is committed to making sure Deybi’s reading becomes a habit.

Some day, Deybi hopes to be a police officer. When sponsors help provide children with Bibles, they are affecting not only the child’s spiritual life, but also the future of the country. With children like Deybi in influential positions — children who know how to solve problems, children who prioritize their family, children who have absorbed Christ’s words and teaching — there is great hope for countries like Bolivia. With the combination of a Bible and sponsorship, Deybi is poised to change his world.