A Story of Hope for Father’s Day

Father’s Day is right around the corner! For many, this is a joyous time to celebrate the incredible dad in their life. For others, it can bring about a flurry of other emotions. Fathers have the potential to bring security, love, wisdom, and so much more to their child. But, as many know, the absence of a father, can cause great hurt and a sense of abandonment. Twenty-one year old, Ileana is familiar with the feelings tied to growing up without a father. 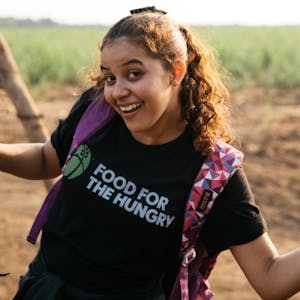 Ileana was born to a very young mother in Nicaragua. Her father abandoned both of them when she was one-year-old. After her dad left, her grandparents became her guardians. They raised her with humility, lots of love, and a knowledge of God. Throughout her childhood, she expressed a curiosity to learn more about her dad. However, her grandparents often avoided questions about her father. She managed to learn his name and the community he lived in. As any child would, Ileana had a desire to meet her dad.

In her late teenage years, Ileana put her passion to help others, especially children, to work in volunteering for Food for the Hungry Nicaragua. For a couple of years, she helped in a variety of ways. Her volunteer work started with sharing knowledge about health and education through Cascade groups. She then taught kids in the community, which led to her involvement with sponsored children. FH staff recognized Ileana’s servant heart and her capacity to lead quickly. In 2017, Ileana began working as a facilitator for FH Nicaragua.

Around the world, each week, FH staff gather together to do devotions. One of the devotionals Ileana’s team studied impacted her significantly. The topic was about forgiveness. After she went through that study, there was someone on her heart she felt that she needed to forgive–her father.

In a devotional during an FH Nicaragua staff meeting, Ileana felt God was telling her to forgive someone: her father. 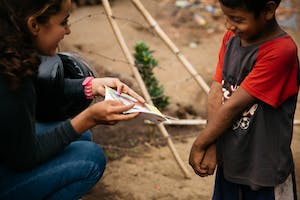 On a day like any other at work, Ileana was assisting a group of children with writing letters to their sponsors. A young boy approached her for help with his letter. In that moment, she recognized there was something special about this child. She recognized they had the same last name, and not only that, they were in the community where her father lived! Ileana asked the boy the name of his father, to her surprise, it was the same as her father’s name. She knew in her heart this was her brother. She wrote her name on his hand and asked him to, “Show this name to your dad and tell him that I am here.” Little did she know, they indeed were close by to the community where her father lived.

In less than a half-hours time, a man arrived at the school asking for Ileana. When she went out to meet the man, she asked him who he was looking for, he replied, “My daughter.” Right there in front of her was her childhood hopes fulfilled, a miracle in the making. Ileana replied to the man, “I am your daughter.” A strong embrace and many tears tore down the wall of separation that had formed over the years of being apart. In this moment of happiness, they expressed how much they loved and missed each other. Ileana stands reunited with her biological father, after 20 years.

Since then, Ileana has met her dad’s side of the family, his wife, and all her siblings. She maintains regular communication with him. Now she has a much larger family! God heard her prayers and fulfilled her dream of reconciling the relationship with her father. If you would like to see more of their story, you can watch them tell it in their own words in the video below:

The Faithfulness of our Heavenly Father

Ileana’s story is a reminder that no matter the season you find yourself in with your dad, whether it is joyous or challenging, there is a Father that is always present. We can see God’s hand in Ileana’s life from the moment she was born to where she is now. That is true for all of us. We can rely on God to be our strong fortress in times of trouble. We can rest in knowing that in Him we are never forsaken. He delights in us and knows every tear we cry and every hair on our head. I pray that we can all find peace in these truths this Father’s Day.

How Nehemiah Shows Us That Joy Strengthens Listening