Chickens, pigs, and pencils — quite an unusual combination. How could these three items together possibly change lives?

There are some titles you hope to hold. Being one of the poorest families in town is definitely not one of them. Yet this is how nine-year-old Bernadette’s family was known.

They found themselves on the brink of starvation more times than they’d like to count. Their living situation was dire; they could barely afford the simplest items like soap and pencils for school, let alone food to satisfy their ever-present hunger pangs. Every morning as the sun rose, Bernadette’s parents, Medard and Alphonsine, woke to their tiny piece of land in the rolling hills of Gatunda, Rwanda and wondered how they would make it through another day to provide for their daughters.

I tried to imagine what it would feel like to be in this situation. As a mother, perhaps standing in the aisles of Target, realizing I didn’t have enough in my wallet to buy milk for the child looking up at me from the shopping cart. Or to struggle with the painful reality that even a pack of pencils for my daughters was too expensive. I imagined coming some empty-handed, again, with no answer to the question, “What are we eating for dinner?” It may seem like a stretch for us here to understand what Medard and Alphonsine felt on a daily basis, aching to change their situation with no real options. But no matter where you live, if you’re a parent, the inability to give your child everything they need strikes a deep and distressing chord.

And as we are learning all too well in these times of economic hardship, the obstacles of a life lived in poverty have a cascading effect.

No employment leads to no savings. No money leads to no food on the table. Poor nutrition leads to sickness. Sickness leads to missed school and chronic health problems. The list goes on.

Medard described his struggle. “All these problems affected my family,” he explained. “We were living with poor hygiene so my children frequently fell sick, and I had difficulty affording treatment. This caused them to have poor performance in class.” 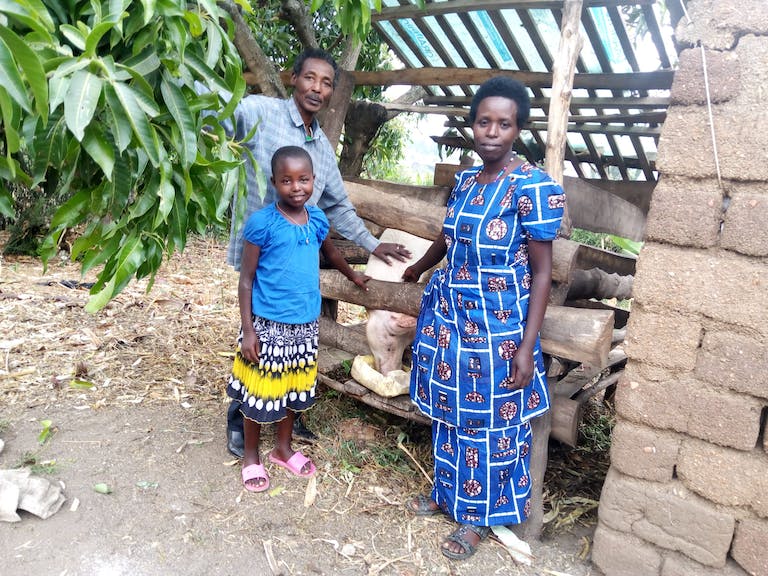 Bernadette (left), her father Medard, her mother Alphonsine, and their pig.

Chickens and Pigs: Potential Into Profit

They needed more than a quick answer. They needed a life changing solution. And that’s where Food for the Hungry (FH) programs helped. Because supporters like you provided funding as child sponsors, Bernadette’s parents chose to enroll her in FH’s activities. But FH didn’t just work with Bernadette — the whole family was involved.

A community savings group helped Medard purchase chickens to raise. Healthy chickens sell well at the market, which brought in money to invest in a bigger piece of land. More money and space meant they could rear pigs too, providing manure to fertilize their crops. Well-fertilized land yields a bigger harvest to feed a family. The list goes on.

Through FH, Medard learned all these techniques and shifted his potential into profit. 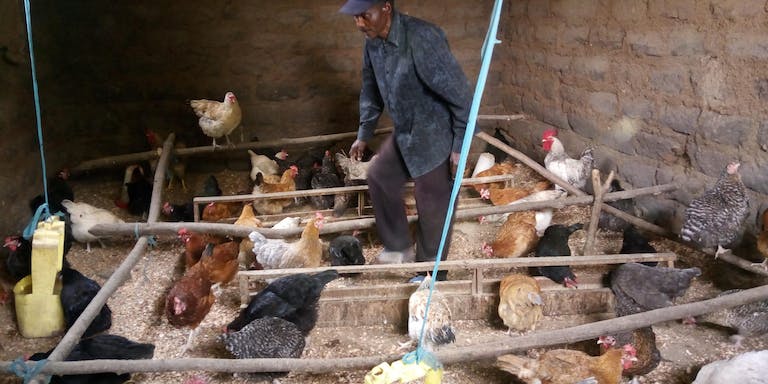 Because FH’s approach is wholistic, it creates a foundation for the entire family to overcome poverty and increase their resilience. For Medard, raising chickens and pigs opened many doors.

“My wife can now cook a balanced diet for our family. My children are healthy, and we can afford health insurance. Their hygiene has improved, allowing them to attend school regularly. Their school fees are paid, and they now have school supplies,” Medard said. “All of this because of FH.”

Perhaps the best part is he now has something you can’t quantify, something he’s never had before: a vision for their future. Or as he puts it, the hope of a “high standard of living.”

And that’s something we can all understand. If you’d like to partner with families like Bernadette’s, bringing new vision and hope, consider becoming a monthly child sponsor.

Pursuing An Education Despite the Odds