Disaster recovery is a long and complex process. It’s much more than getting enough food and water to needy families. It’s about bringing hope and vision to devastated parents and children.

At church, I’m preparing to teach on the book of Job. You may remember that Job lost everything — his home, his children, his livestock, his good health. The Bible gives us the pitiful sight of Job sitting half-naked on a pile of ashes, scraping at tormenting boils with broken pottery. In Job 30:22, we find him crying out to God about the disasters that have fallen upon him: “You snatch me up and drive me before the wind; you toss me about in the storm.”

Yet Job does not lose hope, at least not permanently. It’s hope that keeps pushing him back to God for answers, instead of turning his back on the Lord and giving up.

I’ve gone tent-to-tent with Food for the Hungry (FH) staff, to visit disaster-battered families in places like Ethiopia, the Philippines, and the Democratic Republic of the Congo. Eyes cast down to the floor will lift, and a new spark lights up when strangers walk in. “I see you, I see your suffering, it matters to me,” is what you say when you visit. You offer someone a hopeful, emotional ladder to climb out of a pit.

Yet there’s a next step: If you climb out, where do you climb to? The world as a disaster-victim knows it doesn’t exist anymore.

Climb Out…to Recovery and Beyond

“Recovery” gives the idea of restoring a community to what it was before a disaster. But in many cases, when you donate to disaster relief efforts, you open doors to make a community better than before.

In Bangladesh, where more than 900,000 Rohingya refugees live in squalid conditions, supporters helped FH start 24-hour health clinics and install water systems. This improves the living situation in a section of the massive Kutupalong settlement, to be sure. But the refugee families’ fates are uncertain. None of the homes or buildings are permanent constructions.

Yet no matter where the Rohingya go, they will be healthier. FH has helped train 111 community health workers (CHWs) to date on basic health and hygiene. The CHWs go house-to-house training other community members on vital issues like hand washing, immunizations, and how to spot when a child is dangerously ill. They’ve also helped identify pregnant women early on in their pregnancies, for specific pre-natal treatment and training. Wherever the Rohingya go, they’ll take that knowledge with them — and pass it on to their children. 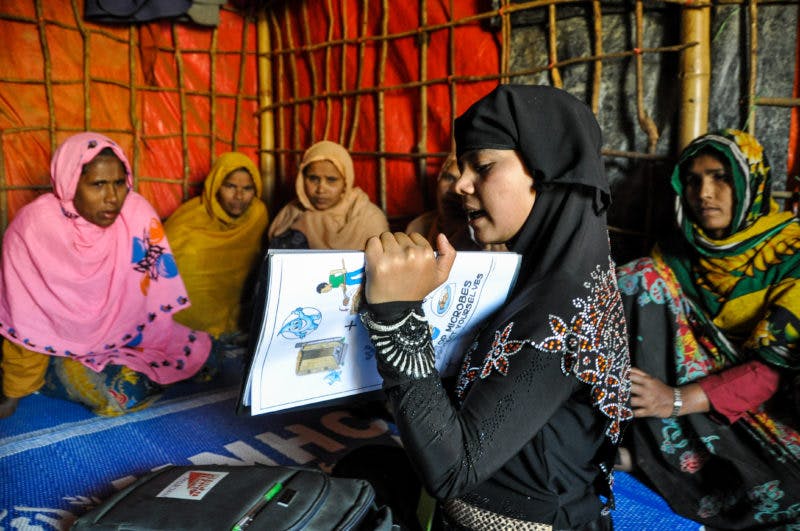 In Mozambique, where two back-to-back cyclones wiped out entire villages earlier in 2019, FH is still rehabilitating schools that were damaged or even flattened by floods and high winds. “In as much as FH’s work is focused on rehabilitation of the existing facilities, in some cases we are building from scratch due to the extent of the damage,” said Lusungu Kaunda, FH Mozambique Program Development Manager. And often the type of construction and materials used are more resilient to future storms. FH is partnering with both the Ministry of Education and UN Habitat for these designs.

The school rehabilitation program has also built most of the 25 school latrines completed thus far from scratch. Improvements in the construction often mean latrines are simply more pleasant to use. Good latrines can be an incentive for students to attend or stay in school. 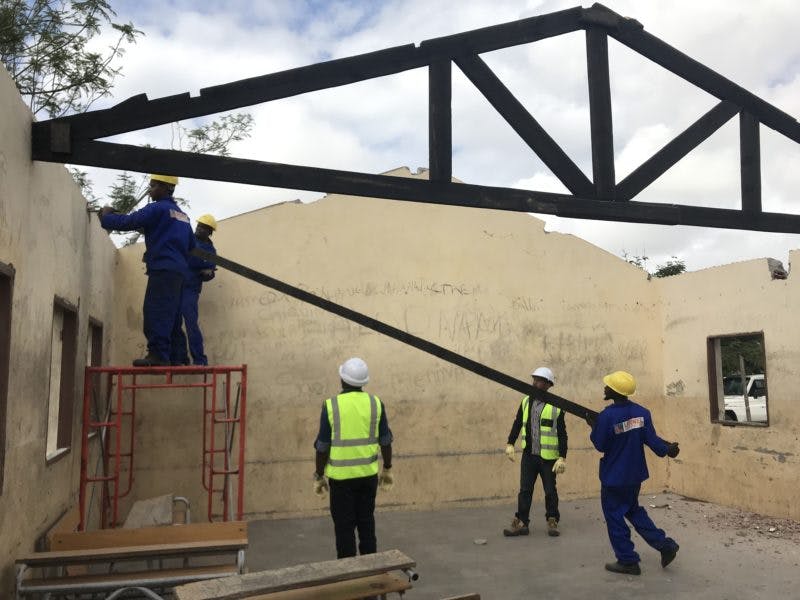 Community members install beams that will hold a new roof at Consito School in Beira, Mozambique after Cyclone Idai took its toll in March 2019.

For Ana, a mother of five children in Dondo, a city in the Sofala province of Mozambique, she was working hard to make ends meet before the cyclone hit. Sadly, her husband had died in 2008 and left the family with very little. She was no stranger to loss.

Ana sold fruit to earn money to keep her young children fed. But it was barely enough. When Cyclone Idai hit, Ana lost everything.

First, her banana crop was destroyed–Ana’s only means of earning income. Then, the family’s home was destroyed.

“The entire house collapsed,” said Ana. “We lost everything. All around us, everything was destroyed. We were afraid for our lives, but mostly, I was terrified for my children.”

Fortunately, Ana and her children survived, but in the aftermath, food and water were scarce. Any food she was able to get, she gave to her children. Needless to say, it was a tragic time for Ana, full of loss and uncertainty about the future. But thanks to generous donors, FH was able to respond immediately so Ana and her community could receive life-saving items such as food, water, and emergency supplies. Since then, FH has continued to help restore hope and rebuild communities. Families like Ana’s also have opportunities to earn income through farming and starting businesses. FH’s ongoing work in Mozambique, including Dondo, where Ana’s family lives, now focuses on helping vulnerable families build stable livelihoods so they can be resilient in the face of future disasters.

Often, your donations to the disaster relief fund help communities strengthen their ability to react rapidly. Or, they help prevent disaster in the first place. With FH’s guidance, community leaders learn how to identify where they are vulnerable, and how to protect themselves.

Seasonal flooding plagues much of northern Ethiopia. Rainwater rolls downhill into swollen, raging rivers. Good farmland is scarce and when it rains, farming families watch the soil in their hillside fields wash away. The best land, often adjacent to rivers, erodes away in the powerful river current.

….And, Empowered to Hope

Most importantly, however, disaster recovery gives people hope. I will never forget visiting a community in the Philippines that was literally flattened by Typhoon Haiyan in 2013. As soon as I climbed out of the car, a man with a broad smile hurried to our group. He literally hugged me. I do like hugs but this surprised me. I’d not seen such warmth from emotionally-battered residents in other disaster areas I’ve visited.

“You came back!” the man kept saying.

He was a community leader in the city government and had been greeting a parade of humanitarian organizations amidst the piles of debris. FH’s team had been there the day before; I was not among them, but he recognized the logo on my hat. “You’re the first group I’ve seen who came BACK,” he continued, smiling broadly. In the coming back, in the staying, in helping parents, churches, and leaders envision a better future, hope remains, even when the walls have crumbled.