Family's Adventure in Giving Back Started at a Concert

The Bolke family’s adventure in giving back started at a concert.

Melanie and Tom Bolke attended TobyMac’s “Hits Deep Tour” with their son, Jeremiah, five years ago near their home.

During a break in the Christian hip-hop artist’s performance, a speaker briefly introduced the audience to Child Sponsorship through Food for the Hungry (FH). For just $38 a month, they explained, you can change a child’s life in one of the poorest places in the world, providing clean water, nutritious food, medical help, and education assistance.

When the speaker asked who would like to receive one of the folders that were being distributing in the auditorium, 5-year-old Jeremiah’s hand was one of the first to shoot up, and he stood, waving, Melanie recalls.

“We were surprised! So my husband, Tom, explained to him, ‘I know you’re only 5, but this is something you continue to do until they (graduate from the program).’ He wanted Jeremiah to understand that, in other words, it can be a long commitment,” says Melanie. “That didn’t faze Jeremiah; he definitely wanted to do it.”

So they started to sponsor Judith, a child in Rwanda. “We wrote letters, and Jeremiah and Judith exchanged drawings they created,” Melanie says.

Giving back was a new experience for all three of them, Melanie said. She explained that they had never really thought of themselves as being able to help others in that way.

“I grew up in a trailer park and was the first in my family to graduate from college,” Melanie said. “My husband and I have both been working, and God chose to bless us.”

“Coming from how I grew up, never in a million years would I have imagined we’d have enough to distribute what was needed by others. But sponsorship was just the beginning for us,” Melanie says.

A Gift from God

“God had just blessed us more than we could ask or ever imagine from the sale of some rental property. And it was really interesting: The day we were praying about where we should put that money? That was the day we received the gift catalog from Food for the Hungry.”

She says it really captured their imaginations. “I have a heart for animals and for providing for children who need food. My husband’s heart is for providing medicine and clean water.”

And so, she said, they started thinking about what else they could do. 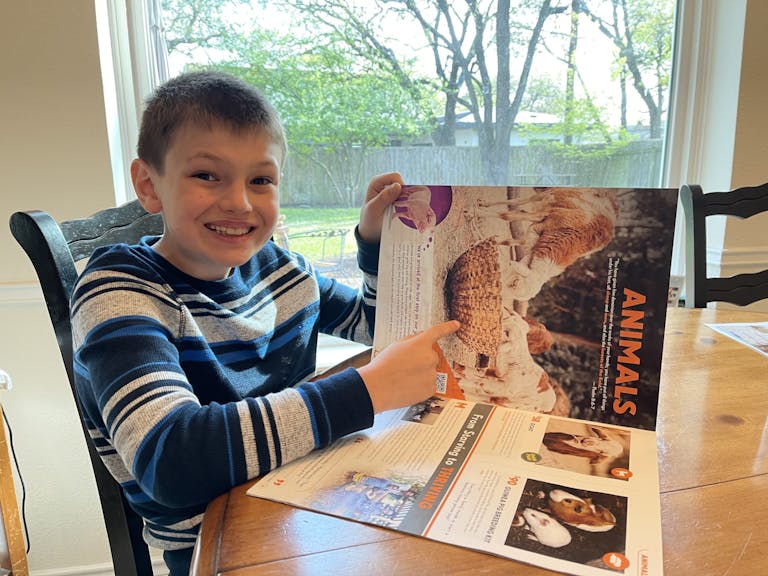 Melanie’s son, Jeremiah, enjoying looking through the Food for the Hungry gift catalog.

Giving Back in a Way She Understood

“The catalog included an emphasis on providing needed doses of deworming medicine,” Melanie explains. The parasitic affliction was not an impersonal one to her.

“I had worked in Thailand, and I had parasites during that time. But I had access to medicine. So this really spoke to me. I just can’t imagine the destruction it would do to your body without medicine,” she says.

Melanie says their car had been totaled in an accident earlier this year. There was insurance money to help with that, but they had also been wanting to buy a house that was would suit their growing needs – and that they could afford.

“But my husband says, ‘Be a channel, not a reservoir.” I felt we needed to concentrate on giving back before we bought anything for ourselves.

The needed medicine was available but funds were needed to pay for the ocean freight. “We did the math, and we were able to buy 30,000 doses of the treatments,” Melanie says.

Later, Melanie says, on the same day they made the donation to Food for the Hungry, they found out a house that was perfect for them became available for sale. “We shouldn’t have even learned about it yet,” she says.

The medicine was en route to the people who needed it most. And the Bolkes’ new house is now under contract.

A Path to the Future: Hope for a Family of 8

A Gift of Chickens Delivers Hope to a Cambodian Family