We Need to Stop Talking About a Refugee Crisis

Since I was a child, I have always been interested in poetry. At the beginning of the Syrian revolution in 2011, which turned into a conflict in less than a year, I began reading the translated books of Rumi, a 13th-century Persian poet.

I soon came across a sentence that made no sense to me until years later: “The wound is the place where the light enters you.”

By then I understood that, just as one cannot see light while in the middle of a war, in order to find the good in life, it is necessary to search for it.

My development work had taken a turn to humanitarian assistance and emergency response, where I worked with internally displaced people (IDPs). One of our projects at that time was to transform a number of buildings into collective shelters. There, we met people from all over the country who had no choice but to leave their homes in search of safety. They were largely confused, heartbroken, and so scared. While the reasons for leaving their villages, towns, and cities varied, the necessity of leaving home was their shared experience.

Waiting becomes agonizing when a temporary situation seems to have become permanent. The unknown restrains IDPs from planning for the future, as their daily focus continues to be survival. They receive essential supplies from humanitarian agencies, but their needs are always greater than what is available.

Access to education and primary health is a privilege, and living in a building other than a tent in the harsh winters and the hot summers is a luxury. IDPs and refugees at risk for trafficking and forced labor often becoming targets of sexual exploitation. Protection is far from adequate as harsh conditions compromise cultural values.

Many IDPs told me that they would rather be home than in tents and would have returned if it was safe. They were primarily concerned about their security and that of their loved ones. They focused on surviving what threatened their safety and well-being, so whatever hardship they were now experiencing was better than what was waiting for them if they went back now.

Yet, so much time had passed. People who fled when they were 10 were now 20. Others had been born in temporary settlements, inheriting no homeland to call their own, only the pain of hopes and dreams lost by others. 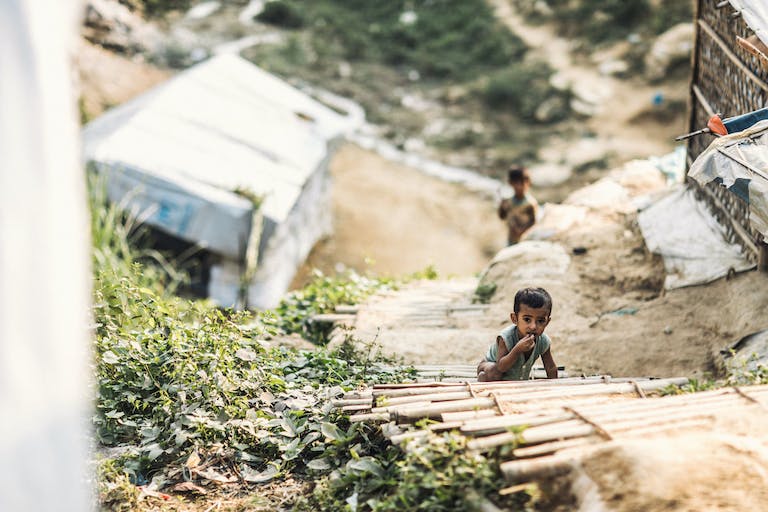 Food for the Hungry (FH) operations in the Rohingya refugee camps in Bangladesh help ensure that babies and mothers alike survive childbirth. But the future for children like this one is fraught with uncertainty and lack of opportunities.

What is the Real Crisis?

I had no answers for any of them. But as a humanitarian and human rights defender, I was and continue to be enraged by the term “the Refugees Crisis.” Media outlets and humanitarian agencies are again applying this phrase, this time to refer to Ukrainian refugees.

But refugees are not the crisis. Violence, war, hunger, and extreme poverty are the crises, often overlapping. Abuse resulting from sexual or gender orientation, political or religious affiliation, and the impacts of climate change that force women, children, and men to flee are creating the crisis. It’s necessary to recognize the complex causes and work to resolve them at the grassroots, strengthening positive coping capacities and building the resilience of people, communities, and governments. Only this will resolve the current situations for refugees and prevent and protect humanity from further pain.

Seeing Refugees as People, Not Problems

In my own family, 15 of my cousins are refugees. Growing up, we never imagined this would happen to us. But our intelligence and high level of education became liabilities, forcing many to flee and seek safety, grasping the crumbs of opportunity to salvage any kind of future.

Whenever we meet virtually, we often discuss the stigma that attaches to refugees, and the foolish questions asked about whether they want to go back to their country – as if there are choices.

In recent years, refugees flee to whatever country will accept them, facing new languages, cultures, and systems challenges. Trying to blend in is a long and exhausting process. One of my cousins jokingly said, “I want them to see me beyond falafel.” No one laughed, and we all became silent. It was so bitter.

We all need to see ourselves in the growing numbers of forcibly displaced communities and individuals. The complex and overlapping causes that push them to seek safety, security, or escape poverty are not far from us. We could be next. As long as we do nothing and those causes remain, none of  us is safe from the threat. 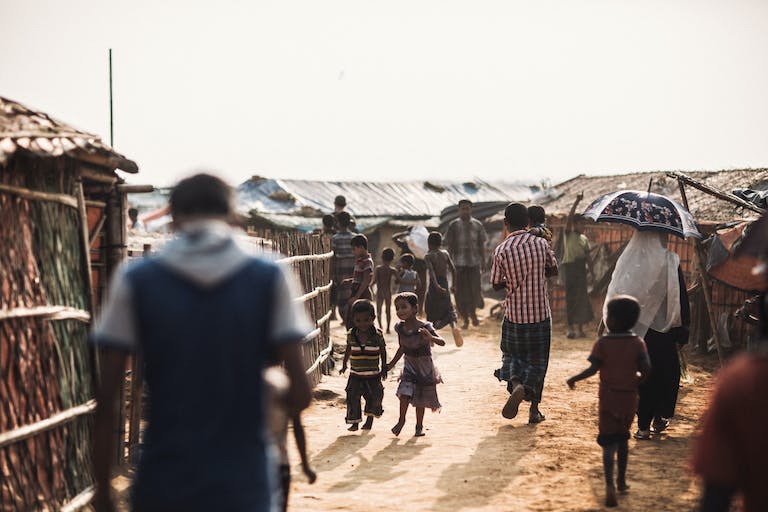 Refugees thrive when given a chance. They not only take but are willing to give back as well. I have witnessed this through friends and relatives who have risen above being labeled as refugees to become active citizens in their new homes.

Additionally, I encountered the success of engaging and partnering with those forced to flee, building safety networks, and collaborating with host communities to resolve issues. Refugees share with the host communities their grievances and continuously work to generate positive social change. In the development world, we call this social capital–relationships within communities, between communities, and between people and their government/systems–and it is a key driver of resilience.

Displaced people are not problems but partners in resolving problems, because they know what it means to hurt, to lose, and to survive – despite their trauma, suffering, and pain.

This is what Rumi wrote of, the light that enters through wounds.

Safaa Shahin is FH’s Global Resilience Manager. She has over 20 years of experience, including 12 years in the development and humanitarian sectors. She worked in the Syrian conflict and has expertise in conflict mitigation, peacebuilding, conflict sensitivity, GBV, and SGBV. She is an active member of the global Do No Harm trainers’ network, Women Waging Peace Network, and the Conflict Sensitivity hub. Her work as a trainer on Conflict Sensitivity and the Do No Harm approach has underpinned her support in the Middle East and Africa, providing technical assistance to local and international non-governmental organizations and United Nations agencies. In 2012, Safaa founded a women’s empowerment initiative that includes 213 members. She now sits as an honorary board member for two local Syrian associations.

Safaa has a BA degree in English literature from Damascus University; an AA from the Intermediate Institute of Engineering, Homs University, Syria; and a mini MBA from the Lazarski University of Warsaw.